Question 1.
Create a table to describe major river systems in India with the following items: direction of flow, countries or regions through which they pass through, and relief features of the areas.
Answer:

Question 2.
Identify and list arguments that would support or oppose use of groundwater in various contexts such as agriculture, industry etc.
Answer:

The arguments that would support the usage of underground water are:

The arguments that would oppose the usage of underground water:

Question 3.
What are the different inflow and outflow processes in the context of water resource?
Answer:
Inflow:

Question 4.
Which of the inflow or outflow processes has the most impact in the context of groundwater resources?
Answer:

Question 5.
Make a list of challenges faced in the water resources in the Tungabhadra basin. Identify the solutions that have been discussed in the context of these problems either in this chapter or elsewhere in different classes.
Answer:
Challenges:

Question 6.
There has been various ways in which changes occurred in the context of water resources. Describe the positive as well as negative social changes that got reflected in this chapter.
Answer:
Positive Social Changes :

Question 7.
Which aspects of farming practices were regulated in the context of Hiware Bazar to improve the water conservation?
Answer:

Question 8.
How significant are the laws and people’s actions, in the context of water resources? Write a short note based on the ideas discussed in the last two sections of the chapter.
Answer:

Question 9.
If you have access to internet, visit www.aponline.gov.in and learn more about Andhra Pradesh WALTA Act.
Answer:

Question 10.
In what ways is water bought and sold in your area and for what purposes? Do you think there should be some checks and balances for this? Discuss.
Answer:
1. The water in our area is mainly supplied by our corporation. They supply through pumps/ nallas. This water is used for drinking and household purpose.
2. Drinking water is also supplied by local companies after purification. They charge Rs. 15 to 30 for on refill.
Yes, I think that there should be some checks and balances for both these supplies. The corporation water tanks should be cleansed at regular intervals. The water should be purified through different possible methods. We should check the refills of the private companies also. And we should observe the cleaning/filtering procedure at the point regularly.

Question 1.
On a map of India identify and mark the Himalayas and the Western Ghats.
Answer: 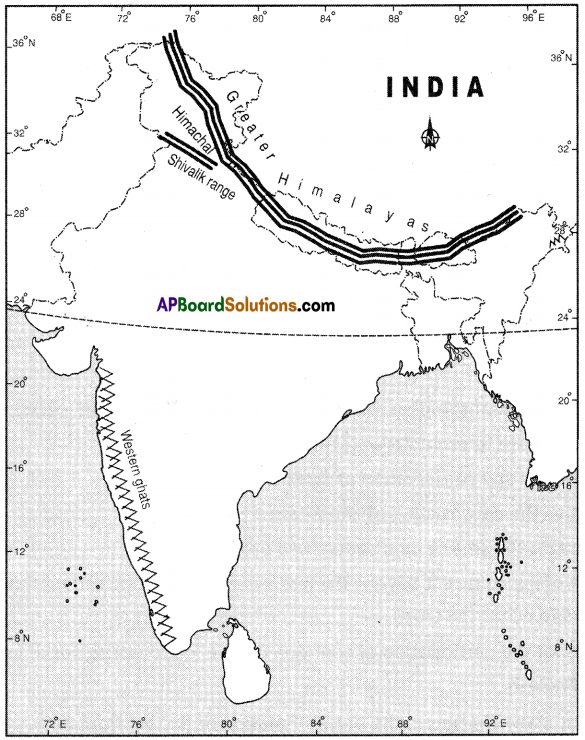 Question 2.
Using the colour code, identify the height range in which some of the rivers originate. Using the atlas and the raised relief map, follow the course of these rivers and locate the direction in which they are flowing.
Answer:
Some of the rivers : Indus, Brahmaputra, Ganga, Krishna, Godavari, Narmada and Tapati.

Question 3.
Discuss: About 5% of water is used for domestic purposes and yet a large section of the population does not have access to the water.
Answer:

Question 4.
40 million hectares of land in India is flood-prone and an equally large part of the country is also drought prone. What are the causes of this ?
Answer:

Question 5.
70% of our surface water resources are polluted. Why?
Answer:

Question 6.
With the help of an atlas trace the course of Indus both in India and Pakistan.
Answer: 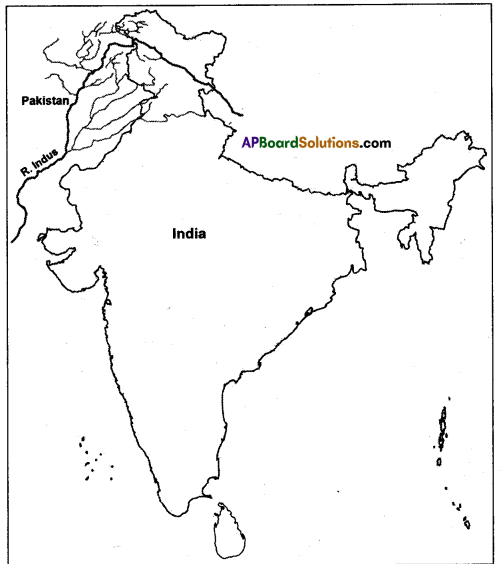 Question 7.
Look at the map of river Ganga and name the states which are drained by it. 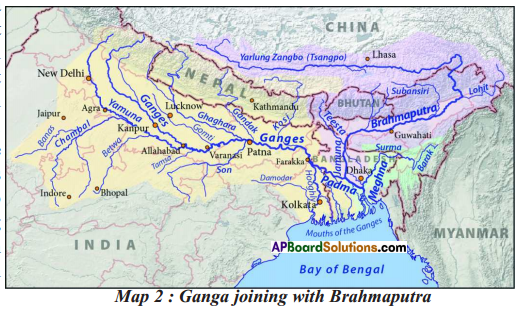 Answer:
The states which are drained by the river Ganga are Uttarakhand, Uttar Pradesh, Bihar, West Bengal, Madhya Pradesh, Haryana and Rajasthan.

South-flowing tributaries of the Ganga :

Question 9.
From the Map and using your atlas, describe the following. 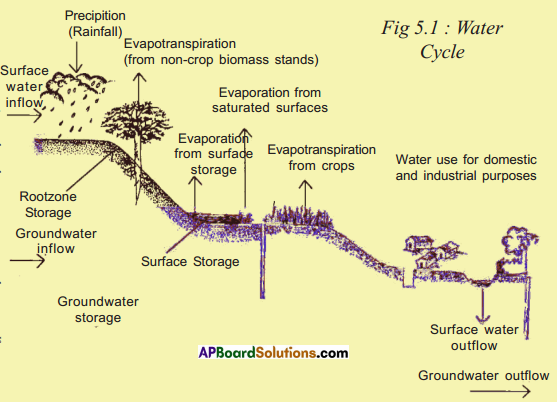 Question 12.
Recall from your science lessons what happens to the water that plants draw through their roots.
Answer:

Question 13.
On a map of India trace the course of the Tungabhadra river.
Answer: 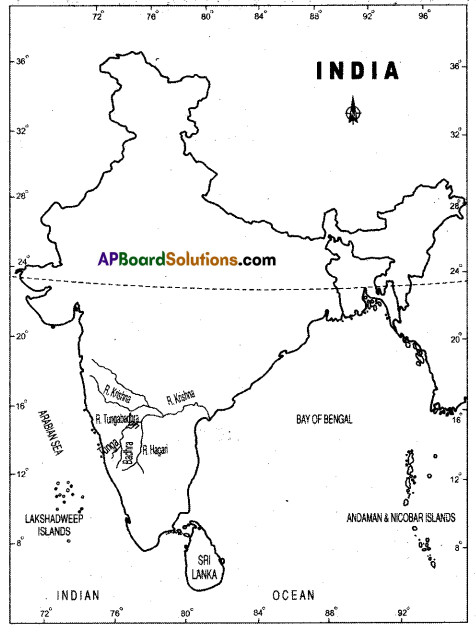 Question 14.
How would it help if there was a government river basin authority for overall planning of water use?
Answer:

Question 15.
What are the different conflicts in the use of water for Tungabhadra river basin ?
Answer:

Question 17.
What was the effort for planning agriculture according to the available water ?
Answer:

Question 18.
If you have access to internet, watch a documentary about Hiware Bazar at http:// bit.ly/kothLl.
Answer:
Students’ Activity

Question 19.
Should groundwater regulation be primarily community-led, as in the case of Hiware Bazar ?
Answer:

Question 20.
“The groundwater laws are both outdated and inappropriate.” Explain.
Answer:

Question 21.
Should groundwater be considered a common pool resource ? Explain your view.
Answer:

Think of plans for your village or locality, which if implemented would help everyone.
Answer:
Students’ Activity.