Question 1.
Why were the Portuguese travellers interested in the forts and armies of Vijayanagara kings?
Answer:
The Portuguese were the first European country to have a trade relationship with India.
By the time of Krishnadeva Raya, the Portuguese had established their power over some parts of the west coast such as Goa. They wanted to colonise India to get raw materials and spices at cheaper rates and markets for their manufactured goods. For this, they wanted to attain political dominance Over the local kingdoms. In this pro¬cess the travellers were sent to study their military strength and about their forts. So the Portuguese travellers were interested in knowing about the forts and armies of Vijayanagara kings.

Question 2.
Why did the kings of Vijayanagara live in a separate quarter and not in the middle of the city as in Orugallu?
Answer:
Orugallu city was constructed around the temple of Lord Siva. So for the sake of protection the kings lived in the centre of the city.
Many secular structures bearing Islamic features were present in the Vijayanagara apine architecture. There are many arches domes and vaults in those constructions. The Royal centre zone is subdivided into irregular interlocking compounds by high slender walls built of tightly fitted granite blocks that face a rubble cone. So because of these safety measures the kings of Vijayanagara lived in a separate quarter.

Question 3.
Historians feel that the Vijayanagara state was highly militarized. In what way do you think it would have affected the common people?
Answer:
Since the kingdom of Vijayanagara was a highly militarized one, it was free from inva¬sions. Thus there was peace and security in the Vijayanagara kingdom. But they spent a lot of money on acquiring guns and cannons, and for purchasing horses. They employed Muslims and the Portuguese to get their soldiers trained in the modern war¬fare. They must have levied heavy taxes on the common people to pay for the military expenditure. Thus the common people must have affected by the heavy taxation.

Question 4.
Why were the Amaranayakas very powerful?
Answer:
Most of the Amaranayakas were Telugu warriors. They recruited their soldiers. These armies were loyal to the Nayakas rather than to the king. They were the revenue, military and judicial heads of their own land assignments. They have the responsibilities of maintaining a certain number of troops, collecting revenue from his land assignments, administering his land holdings and having judicial powers.
So with lots of power and authority over his assignments, there is no wonder for them to become so powerful that when a king died they took power in their own hands and themselves became kings.

Question 5.
Compare the Amaranayakas with the old chiefs of Kakatiyas. Were they different or similar – in what way?
Answer:
The chiefs under Kakatiyas like nayakas under Vijayanagara kings, usually collected several taxes and dues from farmers, herders and craftspersons. The Kakatiya chiefs enjoyed the ownership of the land and got it cultivated for them by tenants. But nayakas of Vijayanagara were given land assignments by the king.
The Kakatiya chiefs spent more of their income on their own comfort than to maintain armies. Whereas the nayakas spent more of their income to maintain armies. Like the Nayakas of Vijayanagara, the Kakatiya chiefs also built tanks and provided other facilities to enable farmers to bring more land under cultivation. Both the officers had to maintain the stipulated number of armies. Unlike the chiefs, the nayakas of Vijayanagara had the other obligations of the judiciary.
But the nayankara system of Kakatiya is very much similar to amaranayaka system of the Vijayanagara kingdom.

Question 6.
Why was the Vijayanagara army dependent on imports from the western coast?
Answer:
Through the western ports war horses from Arabia and Portugal could be im¬ported. Guns were another strategic good Jhat was obtained through the ports. The Portuguese had established their power over some parts of the west coast such as Goa. Krishnadevaraya maintained friendly relationships with the Portuguese in order to get a supply of horses and firearms from them.
So the Vijayanagara army was dependent upon imports from the western coasts.

Question 7.
Krishnadeva Raya fought against several enemies in order to consolidate his kingdom. Make a list of all of them.
Answer:
Krishnadeva Raya led the armies successfully against
a) The Bahmani Sultans
b) The Gajapatis of Odisha and
c) he subdued several chiefs who had revolted in Karnataka, Andhra and Tamil regions. These victories gave him control over the entire region south of river Krishna and especially control over the ports of the eastern coast. 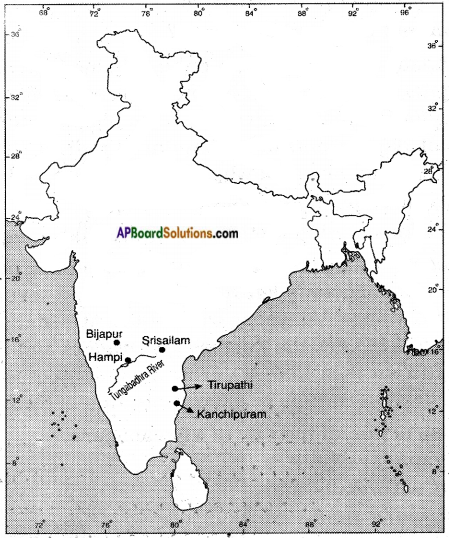