Question 1.
What main criterion is used by the World Bank in classifying different counties? What are the limitations of the above criterion, if any?
Answer:

Question 3.
In what respect is the criterion used by the UNDP for measuring development different from the one used by the World Bank?
Answer:

Question 4.
Do you think there are certain other aspects, other than those discussed in the chapter that should be considered in measuring human development?
Answer:

Question 5.
Why do we use averages? Are there any limitations to their use? Illustrate with your own examples related to development.
Answer:

Question 6.
What lessons can you draw about the importance of income from the fact that Himachal Pradesh with lower per capita income has a better human development ranking than Punjab?
Answer:

Question 7.
Based on the figures in Table 6, fill the following :

Question 8.
What is the per capita income of Himachal Pradesh? Do you think higher incomes can make it easier for parents to send children to school? Discuss. Why was it necessary for the government to run schools in Himachal Pradesh?
Answer:

Question 9.
Why do you think parents accord less priority to girls education as compared to boys?
Answer:

Question 10.
What is the relationship between women’s work outside their homes and gender bias?
Answer:

Question 11.
Right to Education Act, 2009 (RTE) declares that all children of the age of 6 to 14 years have the right to free education. And the government has to ensure the building of sufficient schools in the neighbourhood, appoint properly qualified teachers and make all necessary provisions. In the light of what you have read in this chapter and already know, discuss and debate the importance of this Act for
(i) children, and (ii) human development.
Answer:
Importance of RTE Act for children :

Question 1.
Complete the table with developmental goals of different categories of persons. 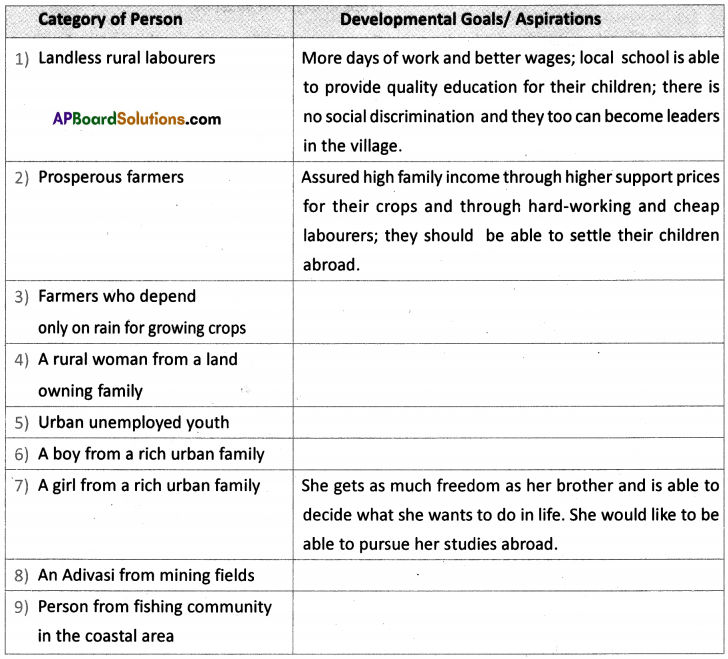 Question 2.
Read the newspaper report given on Text Page 16 and answer the following questions.
(i) Who are the people benefited and who did not ?
Answer:

(ii) What should be the developmental goals for this country ?
Answer:
The developmental goals for this country are
a) The government should Impose strict rules and regulations regarding “the disposal of waste”
b) The government should safeguard the environment and check air and environment pollution.
c) The companies who violate rules, should be punished severely.

(iv) What are the issues of conflict between the government and the people living in regions of nuclear power plant ?
Answer:

(v) Do you know of any such controversy around development projects/policies? Find out the debates on either side.
Answer:

Question 3.
Why do different persons have different notions of development? Which of the following explanations is more important and why ?
a. Because people are different.
b. Because life situations of persons are different.
Answer:

Question 5. Give some examples where factors other than income are important aspects of our lives.
Answer:

Question 6.
Explain some of the important ideas of the above section (Income and Other Goals) in your own words.
Answer:

Question 7.
Give three examples where an average is used for comparing situations other than what is given here.
Answer:

Question 8.
Why do you think average income is an important criterion for development? Explain.
Answer:

Question 9.
Suppose the records show that the average income in a country has been increasing over a period. From this, can we conclude that all sections of the economy have become better? Illustrate your answer with an example.
Answer:

Question 11.
Write a paragraph on your notion of what India should do, or achieve, to become a developed country.
Answer:
To become a developed country India should be 100% literate. We are a resource rich country. We shall make optimum use of them. The governance should be transparent. We shall provide our youth with a gainful employment. We shall encourage students to pursue the careers of scientists to serve our country. We should adopt technology in agriculture. We shall promote industrial and service sectors. 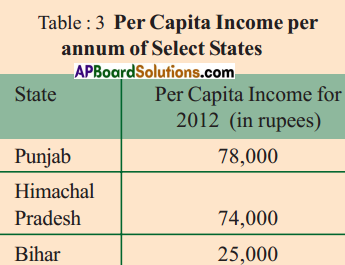 Question 13.
Think of other examples where collective provision of goods and services is cheaper than individual provision.
Answer:

Question 14.
Does availability of good health and educational facilities depend only on amount of money spent by the government on these facilities? What other factors could be relevant?
Answer:

Here is an illustration showing different sources of livelihoods. Create a similar illustration and write caption that would describe their notion of development.