Question 1.
Who were Luddists? Mention any one demand of the Luddists. (SA-I : 2019-20)
Answer:
Workers who destroyed machinery, especially in cotton and woollen mills, that they believed was threatening their jobs.
Demand of Luddists :

Question 2.
Why the idea of socialism was appreciable? Write your views. (SA-I : 2018-19)
Answer:
Socialists generally aim to achieve greater equality in decision making and economic affairs, grant workers have greater control of the means of production and their work place, and to eliminate exploitation by directing the surplus value to employees.

Question 2.
What is Luddism?
Answer:

Question 3.
Name of few thinkers of socialist ideas as they expressed their views.
Answer:

Question 5.
Read the following passage and answer the questions given below.
What is Socialism? It is a doctrine that calls for public rather than private ownership or control of property and natural resources. According to the socialist view, individuals do not live or work in isolation but live in cooperation with one another. Further, everything that people produce is in some sense a social product, and everyone who contributes to the production of a good is entitled to a share in it. Society as a whole, therefore, should own or at least control property for the benefit of all its members.

In this way, socialism contradicts the basic idea of capitalism which is based on private ownership of the means of production and free play of market in determining what is to be produced and who is to be given a share of the produce. Socialists complain that capitalism necessarily leads to unfair and exploitative concentrations of wealth and power in the hands of the relative few. The rich then use their wealth and power to’ reinforce their dominance in society.

Because such people are rich, they may choose where and how to live, and their choices, in turn, limit the options of the poor. As a result, terms such as individual freedom and equality of opportunity may be meaningful for capitalists. But for the working people, who must do the capitalists’ bidding if they are to survive, they can only hollow. As socialists see it, true freedom and true equality require social control of the resources that provide the basis for prosperity in any society.

Socialists also believe that given such unequal distribution of resources, there cannot really be genuine free competition as the rich and powerful manage to tilt the balance in their favour by hook or crook.
1) What is socialism?
Answer:
Socialism calls for public ownership rather than private control of property and natural resources.

2) What is the basic idea of capitalism?
Answer:
Capitalism is the private ownership of the means of production.

3) what is the complaint of socialists about capitalism?
Answer:
Socialists complain that capitalism distributes wealth and power in an unfair and exploitative manner. It gives all the money and power to a few individuals.

5) What are the disadvantages of capitalism?
Answer:

Question 6.
Read the following passage and answer the questions given below.
The movement for extending the right to vote to all sections of the population gained momentum in 1830 to 1870. In countries like England, women too came out in large numbers demanding right to vote. They were called ‘women’s suffragists’. They held demonstrations, meetings and wrote in newspapers, etc. and made appeals to the Parliament. Russian Revolution was the first to grant such rights to all women in 1917. The right to vote was extended to some women in England in 1918 and to all adult women by 1928. Gradually this was accepted by most democratic countries.
1) Who were “women’s suffragists”?
Answer:
Women who fought for their right to vote were called “women’s suffragists”.

2) How did they fight for the right to vote?
Answer:
They held demonstrations, meetings, wrote in newspapers etc. and made appeals to the Parliament.

5) Do you feel that women should be granted with right to vote? If yes, why?
Answer:

The following are some acts that protect women.

Question 8.
Locate the following on the outline map of Europe. 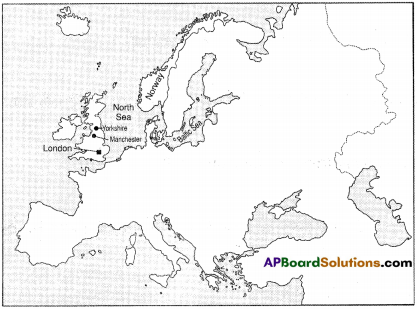