Question 2.
How do you find the focal length of a concave mirror?
(OR)
What is the name given to distance between pole and focal point? How would you able to find that distance by using an activity? That distance is called focal length.
Answer: 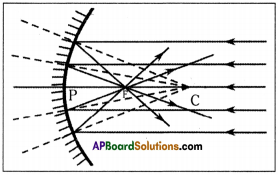 To find the focal length of a concave mirror –

Question 3.
Where will the image form when we place an object, on the principal axis of a concave mirror at a point between focus and centre of curvature?
Answer:

Question 6.
Distinguish between real and virtual images.
(OR)
Varun sees his image in a concave mirror. When he moves away he was unable to see his image. Write the differences between those two images.
Answer:

e) Focal length :
The distance of the focus from the pole is called the focal length (f) of the mirror.

f) Principal axis :
The horizontal line which passes through the centre of curvature and pole.

i) Magnification :
The ratio of size of image to the size of object is known as magnification.

Question 9.
Write the rules for sign convention.
(OR)
Vinay wants to solve a problem related to mirrors. What are rules to be followed by him in order to solve the problem?
Answer: 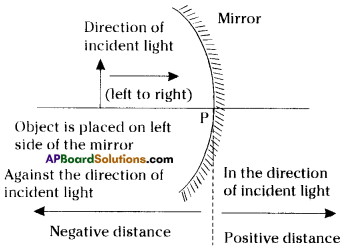 Procedure:
1) Place the concave mirror on V-stand, a candle, and meter scale as shown in figure.

2) Keep the candle at different distances from the mirror (10 cm to 80 cm) along the axis and by moving the paper (screen) find the position where you get the sharp image on paper.

4) Find the average of T. This value of T is the focal length of the given concave mirror.

Question 16.
Draw a ray diagram to show the process of converging of the parallel beam by a concave mirror by taking four parallel incident rays.
Answer: 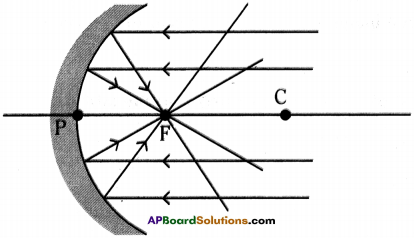 Rule 1 :
All the rays, that are parallel to the axis, get reflected such that they pass through the focal point of the mirror.

Rule 2 :
A ray that passes through the focal point of the mirror will, travel parallel to the axis after reflection.

Rule 3 :
A ray, passing through the centre of curvature of the mirror and incidents on the mirror, after reflection will travel along the same line, but in opposition direction.

Question 18.
Show the formation of image with a ray diagram, when an object is placed on the •principal axis of a concave mirror away from the centre of curvature.
Answer:

Question 19.
Make a solar heater / cooker and explain the process of making.
(OR)
Which cooker uses solar energy to cook food and explain its making?
(OR)
Explain the construction and working of a solar cooker.
Answer: 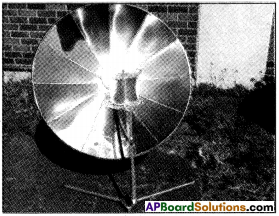 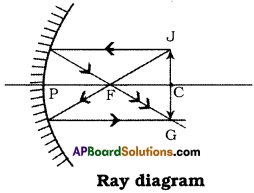 Question 22.
How do doctors use concave mirrors?
Answer:

Question 23.
Why do we prefer a convex mirror as a rear-view mirror in the vehicles?
Answer:

Question 24.
Complete the table-1 which is related to experiment done by a concave mirror.

Observation :
We can observe path of the incident and reflected rays clearly in the smoke of Agarbathi.

Observation :
We can observe diverging light rays. We cannot catch any converging point on the screen.

Question 26.
Collect information about the history of spherical mirrors in human civilization. Display it in your classroom.
Answer:

Question 4.
How will our image be in concave and convex mirrors? Collect photographs and display in your classroom.
Answer:

Question 5.
How do you appreciate the use of reflection of light by a concave mirror in making of TV antenna dishes?
Answer:

Question 6.
A convex mirror with a radius of curvature of 3 m is used as rear view in an automobile. If a bus is located at 5 m from this mirror, And the position, nature and size of the image.
Answer:

Position = 1.15 m behind the mirror. Nature = Virtual and erected.
∴ Image is erect and smaller in size by a factor of 0.23.

2) If we place an object beyond focus (F) inverted image will be formed.

Question 1.
Did you burn a paper by using a magnifier?
Answer:
Yes.

Question 2.
What causes burning of the paper, while doing it?
Answer:
Converging light rays through magnifier at one point on the paper.

Question 3.
Can you use a plane mirror to burn a paper instead of a magnifier lens?
Answer:
Cannot.

Question 5.
Which type of mirrors may be used to converge light rays?
Answer:
Concave mirrors.

Question 7.
Can we burn a paper by using light rays of the torch light?
Answer:
Cannot.

Question 8.
Can’t? Why?
Answer:
The light rays coming from the torch light are not parallel rays. Hence, they cannot converge at one point on the paper with high intensity.

Question 10.
Which line is taken as a base to draw a reflected ray to the given incident ray?
Answer:
Normal taken as base.

Question 11.
Does a concave mirror from image at focus in all situations?
Answer:
No

Question 12.
See the given figure, a set of parallel rays are falling on a convex mirror. What conclusions can you draw from this?

Answer:
The parallel rays are diverging after reflection. If we extend the reflected rays backwards, they meet at F which is focal point of convex mirror. The image formed is virtual, straight and point sized.

Question 13.
Will you get a point image if you place a paper at the focal point?
Answer:
We can get highly enlarged image at infinity when we place paper at focal point.

Question 14.
How can you find the focal length of a convex mirror?
Answer: 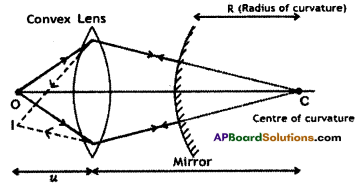 Question 17.
Do you get an image when object is placed at F? Draw a ray diagram. Do the experiment.
Answer:

When an object placed at F, we can get the image at an infinite distance.

Question 2.
Show that a powerful source far away is needed to get parallel rays of light.
Answer: 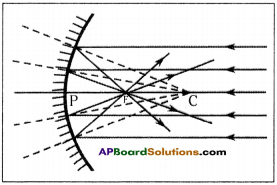 1) Place the concave mirror on V-stand, a candle and meter scale as shown in figure.
2) Keep the candle at different distances from the mirror (10 cm to 80 cm) along the axis and by moving the paper find the position where we get sharp image on paper.

3) Note down the observations in table -1

4) Since we know the focal point and centre of curvature, we can re-classify the above observations as shown in the table – 2.

5) Then note down the observations in table – 2