Look at the picture given below and answer the questions that follow. 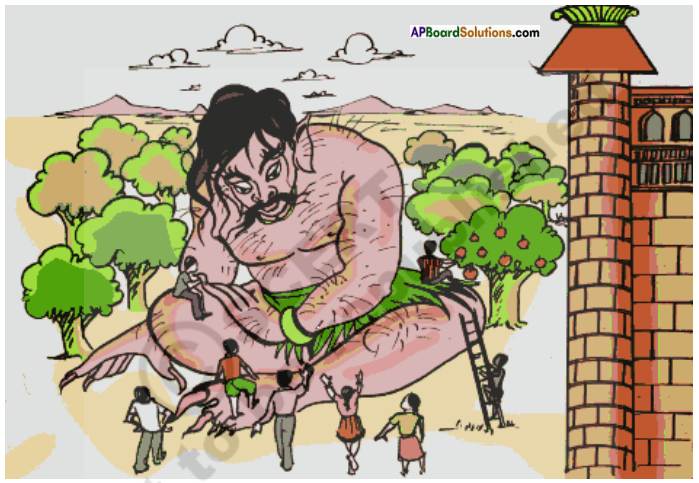 Question 1.
What do you notice in the picture?
Answer:
I noticed some children playing in the garden. A giant was watching them at their games. A boy was sitting on his knee. Another one sat on his thigh picking the fruits. Someone was climbing up the ladder to reach the giant. Another boy who sat on his foot, was trying to walk on his body. They were all playing with him.

Question 2.
What do you think of the size and sitting posture of the figure which is looking at the children?
Answer:
The children are little ones whereas the giant is a huge one. He is watching the children at their games. He seems to be sad
for some unknown reason.

Question 3.
What is the mood of the children?
Answer:
The children are in playful mood. They are all joyful. The way they play shows us this.

Question 3.
Who are the two giants in the play?
Answer:
The two giants, old Giant and the Giant are one and the same. The ‘old Giant’ is a selfish character whereas ‘the Giant’ is a kind character.

Once there was an old Giant. He was very selfish. He had a large lovely garden, with soft green grass. The grass stood beautiful flowers like stars and there were twelve peach trees in the garden. Every afternoon, as they were coming from school, the children used to go and play in the Giant’s garden. The Giant had been to visit his friend the Cornish og and came back after seven years. When the Giant came back, he saw the children playing in the garden. The selfish Giant told the children that they couldn’t play in his garden. He built a high wall all round and put up a notice-board: “TRESPASSERS WILL BE PROSECUTED.” Now, the children couldn’t play anywhere. They tried to play on the road, but it was very dirty and lots of hard stones were there on the road. When a boy told that the Giant was selfish, the Giant opened a door in the wall and told again that he would not allow anybody to play in his garden. When the children heard his voice, they scattered. Then the spring came, and there were little blossoms and little birds all over the country. But it was still winter in the Giant’s garden. In his garden the birds did not come to sing, and the trees forgot to blossom. The North Wind, the Hail, the Frost and the Snow were dancing about through the trees in the garden.

spring time (n): the season between winter and summer when plants begin to grow

trespassers (n): persons who go into land without permission

cloak (n): a type of coat that has no sleeves

chimney-pot (n): a short, wide pipe placed on top of a chimney

autumn (n): the season of the year between summer and winter when leaves change colour

pleased (v): felt happy about something

hail (n): small balls of ice that fall like rain

rattled (v): made a series of short loud sounds when hitting against some thing hard.