Students can go through AP Board 7th Class Maths Notes Chapter 15 Symmetry to understand and remember the concepts easily.

→ If we rotate a figure, about a fixed point by a certain angle and the figure looks exactly the same as before, we say that the figure has rotational symmetry.
Ex: An equilateral triangle; a square etc. 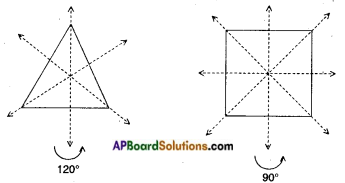