Question 1.
Write any two measures taken by the government of Andhra Pradesh to empower women?
Answer:

Question 2.
Classify the given items under suitable headings matching to the person and related issues?

Question 3.
What is the mid-day meal programme? Can you list three benefits of this, programme?
Answer:
The government is trying to implement the equality that is guaranteed in the Constitution through laws and several schemes. The government has set up several schemes to improve the lives of communities and individuals who have been treated unequally for several centuries. One such programme is the mid-day meal programme. This programme was introduced in all government elementary schools to provide children with cooked and nutritious food. This programme has many positive effects.
Some of them are:

Question 4.
Read the following passages:
“Long did we wait, but no one turned up. An hour elapsed and the station master came to enquire. He asked us for our tickets. We showed them to him. He asked us why we tarried. We told him that we were bound for Koregaon and that we were waiting for father or his servant to come, but that neither had turned up and that we did not know how to reach Koregaon. We were well-dressed children. From our dress or talk, no one \ could make out that we were children of the untouchables. Indeed the station master j was quite sure we were Brahmin children and was extremely touched at the plight in which he found us. As is usual among the Hindus, the stationmaster asked us who we j were. Without a moment’s thought, I blurted out that we were Mahars. (Mahar is one of the communities which are treated as untouchables in the Bombay Presidency.) He was stunned. His face underwent a sudden change. We could see that he was overpowered by a strange feeling of repulsion. As soon as he heard my reply, he went away to his room and we stood where we were.
Fifteen to twenty minutes elapsed; the sun was almost setting. Our father had not turned up nor had he sent his servant, and now the station master had also left us. We were quite bewildered, and the joy and happiness, which we felt at the beginning of the journey, gave way to a feeling of extreme sadness.
After half an hour the station master returned and asked us what we proposed to do. We said that if we could get a bullock-cart on hire we would go to Koregaon, and if it was not very far we would like to start straight away. There were many bullock-carts I plying for hire. But my reply to the station master that we were Mahars had gone round among the cart men and not one of them was prepared to suffer being polluted and to demean himself carrying passengers of the untouchable classes. We were prepared to pay double the fare but we found that money did not work. The station-master, who was negotiating on our behalf, stood silent, not knowing what to do.
Source: Dr B.R. Ambedkar, Writings and Speeches, Volume 12, Edited Vasant Moon,
Bombay Education Department, Govt, of Maharashtra.
Now answer the following questions:
a. Despite the children offering money the cartmen refused them. Why?
Answer:
The fact that the children belonged to the caste of Mahars had gone around the cartmen. Though the children offered money the cartmen refused them because a) they were not prepared to, suffer being polluted and to demean themselves by carrying passengers of untouchable classes, b) They feared that the upper caste people would never engage their carts if they carried the children of Mahars.

b. How did the people at the station discriminate against Dr Ambedkar and his brother?
Answer:
At the station, the station master showed no interest in them after he was told that they belonged to Mahars. He made them wait for a long time. He could not convince the cartmen to carry them in their carts to Koregaon. After they learnt that they belonged to Mahars, the cart- men refused to carry them in their carts because they were not prepared to suffer being polluted and to demean themselves by carrying the children of untouchables.

c. How do you think Dr B.R.Ambedkar felt as a child when he saw the station master’s reaction to his statement that they were Mahars?
Answer:
I don’t think Ambedkar should have repented for saying that they were Mahars when he saw the station master’s reaction. He was truthful and courageous and he knew that he would have to suffer a lot of discrimination if he revealed his caste. For the sake of convenience and comfort, he did not like to sacrifice his caste.

e. How did this make you feel?
Answer:
I feel very bad about this. I want to ask myself how I should feel if I were to face discrimination. I think there should not be any discrimination based on birth. It is very much insulting and hurtful. We should not violate anyone’s dignity by showing discrimination.

Question 5.
Read the following passage:
An example of Discrimination in schools
Omprakash Valmiki is a famous Dalit writer. In his autobiography, Jonathan, writes, “I had to sit away from the others in the class, and that too on the floor. The mat ran out before reaching the spot I sat on. Sometimes I would have to sit way behind everybody, right near the door sometimes they would beat me without any reason.
When he was in Class IV, the headmaster asked Omprakash to sweep the school and the playground. He writes, “The playground was way larger than my small physique could handle and in cleaning it, my back began to ache. My face was covered with dust. The dust had gone inside my mouth. The other children in my class were studying and I was sweeping. The headmaster was sitting in his room and watching me. I was not even allowed to get a drink of water. I swept the whole day,… From the doors and windows of the school rooms, the eyes of the teachers and the boys saw this spectacle. ” Omprakash was made to sweep the school and the playground for the next couple of days and this only came to an end when his father, who happened to be passing, saw his son sweeping. He confronted the teachers and then walking away from the school holding Omprakash’s hand, he said loudly for all of them to hear, “You are a teacher So I am leaving now. But remember this much Master…. (He) will study right here in this school. And not just him, but there will be more coming after him. ”
Now answer the following questions:
a. What acts of discrimination did Omprakash Valmiki face in his school?
Answer:

c. “Omprakash was made to sweep the school and the playground for the next couple of days” When did this come to an end? (or) How did his father react to seeing this?
Answer:
One day Omprakash’s father happened to be passing by and saw his son sweeping. He confronted the teachers. He took his son and walked away from the school. He was annoyed to see his son sweeping, while all the other children were listening to lessons in the classroom.

Question 6.
Observe the following photos of social reformers and write their names. 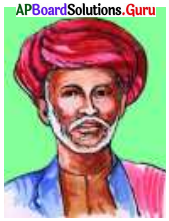 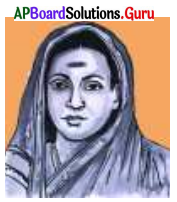 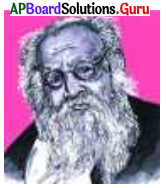 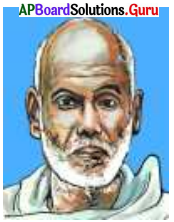 Now answer the following questions.
a. What was Jyotiba Phule’s contribution to achieving social equality?
Answer:
He was the pioneer of women’s education in India. He founded the ‘Satyasodhak Samaj’ to secure human rights and social justice for low caste people.

b. What was Savitri Bai Phule’s contribution to Indian society? (or)
Explain the efforts of any one of the social reformers.
Answer:
She devoted her life to educating Dalits. She was the pioneer of women’s education in India. She was the first headmistress of the country’s first girls’ school in Pune. She started a night school for agriculturists’ and labourers. She died while serving plague patients.

c. Write about Narayana Guru’s contribution to Indian society.
Answer:
He preached brotherhood for all. He fought against the ill effects of the caste system. He led the quiet but significant social revolution. He gave the watchwords ‘One Caste, One Religion, One God for all men.’

d. What was Periyar’s contribution to Indian society?
Answer:
Periyar is known as a rationalist and the leader of the lower caste movement in India. He made the people realise that all men are equal. He taught that it is the birthright of every individual to enjoy liberty and equality.

Question 8.
In what ways do you think the caste system promotes inequality among people?
Answer:

Question 9.
Why do you think Omprakash Valmiki was being treated unequally by his teacher and his classmates?
Answer:
Omprakash Valmiki was a Dalit by birth. Because he belonged to a lower caste, his schoolmates and teachers hurt his dignity badly and made him feel as if he was less than equal to all the other students in the school. Because of his caste, he was picked and was made to sweep the school, and he was made to sit on the floor behind all the other students in the class.

Question 10.
Find out about a government scheme in your area. What does this scheme do? To whom is this scheme intended to benefit?
Answer:
Student Activity.

Question 11.
Discuss with your parents or grandparents how the caste system functioned earlier to find out what has changed and what has not. Prepare a report and present it in the class.
Answer:
Student Activity.