Question 3.
Look at map 1 once more and find out whether there were any kingdoms in the state in which you live?
Answer:
Optional.

Question 4.
Observe the picture and answer the questions. 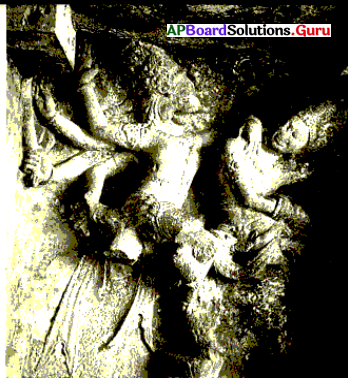 b. Who is the male in this?
Answer:
The male is Vishnu or Narasimha.

e. Name any king of that dynasty.
Answer:
Amoghavarsha.

Question 5.
Read the following passage and answer the questions :
The Emergence of New Dynasties: By the seventh century there were big landlords or warrior chiefs in different regions of the subcontinent. Existing kings often acknowledged them as their subordinates or Samanthas. They were expected to bring gifts for their kings or overlords, be present at their courts and provide them with military support. As samanthas gained power and wealth, they declared themselves to be maha-Samantha, maha mandaleshvara (the great lord of a “circle” or region), and so on. Sometimes they asserted their independence from their overlords.
a. What did the existing kings do?
Answer:
Existing kings often acknowledged the big landlords or Warrior chiefs as their subordinates or Samanthas.

b. What were they expected to?
Answer:
They were expected to bring gifts for their kings.

e. What happened sometimes?
Answer:
Sometimes they asserted their independence from their overlords.

Question 6.
Read the following and answer the questions.
The “achievements” of Nagabhata:
Many rulers described their achievements in Prashastis.
One prashasti, written in Sanskrit and found in Gwalior, Madhya Pradesh, describes the exploits of Nagabhata, a Pratihara king, as follows:
The kings of Andhra, Saindhava (Sind), Vidarbha (part of Maharashtra), and Kalinga (part of Odisha) fell before him even as a prince …
He won a victory over Chakrayudha (the ruler of Kanauj);
He defeated the king of Vanga (part of Bengal), Anarta (part of Gujarat), Malva (part of Madhya Pradesh), Kirata (forest peoples), TuruShka (Turks), Vatsa, Matsya (both kingdoms in north India) …

a. What did many rulers do?
Answer:
Many rulers described their achievements in Prashastis.

b. Who was Nagabhatta?
Answer:
He was a Pratihara king.

d. Who were ‘Kiratas’?
Answer:
They were forest people.

Question 7.
Locate the following on the given map. 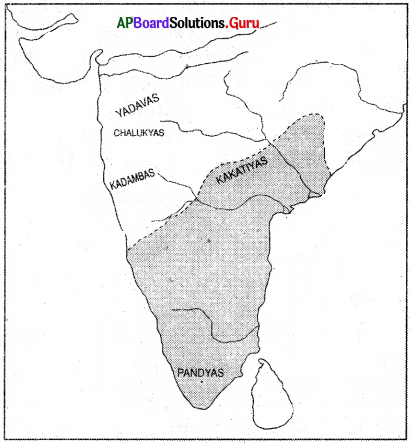