Question 3.
Who was the Prime Minister that abolished Privy Purses?
Answer:
Indira Gandhi.

Question 5.
Write any two differences between the Russian Revolution (1917) and the Indian freedom movement.
Answer:

Question 6.
This map depicts an event of India’s struggle for Independence. What could be that event? 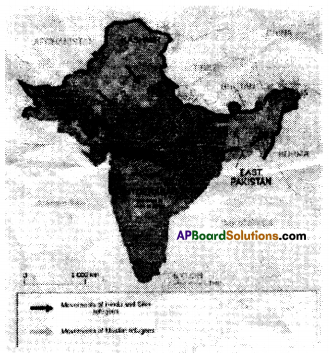 Answer:
This is the incident that happened on the partition of India.

Question 6.
Observe the following table. It has certain events shown by letters

Write the suitable ENGLISH LETTER for each event listed above in the boxes against each on the timeline.

Question 16.
What was the Congress demand?
Answer:
The Congress also demanded that an immediate national government should be set up at the centre.

Question 17.
How did Congress argue?
Answer:
The Congress argued that Hindus and Muslims were not people of two different nations but part and parcel of one Indian nation.

Question 19.
What was called privy purse?
Answer:
The government of the princely states was taken over and the princes were given pension funds called privy – purse to meet their personal expenses.

Question 21.
What did the Congress expect before World War – II?
Answer:
The Congress expected that the British would see their double standards in the expectation that India should support them in fighting the fascists but not giving India full freedom.

Question 26.
Why did the British object Congress demand?
Answer:
The British objected to this by saying that they had to also protect the interests of several other communities in India.

Question 28.
How were the special war time powers?
Answer:
Anyone who opposed the government could be jailed without much delay and kept imprisoned for a long time without going to court. Freedom of speech was also curtailed.

Question 30.
Where were the independent governments proclaimed?
Answer:
In several districts, such as Satafra in the west and Medinipur in the east, “independent” governments were proclaimed.

Question 31.
Who won the World War-ll?
Answer:
The Allied powers.

Question 32.
What happened on 18th February 1946?
Answer:
On 18th February 1946, the guards or Ratings of the Royal Indian Navy in Bombay harbour came out on hunger strike to protest against bad food and behaviour of their British officers.

Question 33.
Who was the head of Naval Central Strike Committee?
Answer:
M.S. Khan.

Question 34.
What happened on 30th January 1948?
Answer:
Less than six months after independence, the Father of the Nation fell to three bullets while going out for his all-religion prayer in the evening of 30 January 1948.

Question 35.
How many princely states were there in India?
Answer:
There existed around 550 princely states which enjoyed different levels of sovereignty but were under British paramount power.

Question 37.
Name the three princely states which joined the Indian Union in the next two years to 1947.
Answer:
Kashmir, Hyderabad and Junagadh.

Question 1.
“India is a land of many religions and many races and must remain so.” Comment.
Answer:

Question 5.
Explain the causes that led to partition of India?
Answer:

Question 6.
What was the political picture in India in 1939?
Answer:
When the war started in 1939, most of the provinces of Indian were governed by Congress ministries. The British government had accepted the principle that the right to rule themselves must be given to Indians to an extent.

Question 7.
Write about the Govt, of India Act 1935.
Answer:
The Government of India Act was passed in 1935 by the British Parliament. According to this, elections may be held in provinces and governments may be formed by parties that won in the elections.

Question 10.
Write about the Muslim League.
Answer:
This was a party formed in 1906. Till 1930, it mainly represented the interests of Muslim landlords of UP and did not have much mass support. It had demanded that the British should create separate seats in all councils for which only Muslims would vote.

Question 11.
What was the agreement of the Muslim League?
Answer:
The Muslim League had argued that since the majority people in many areas were Hindus, more Hindus are likely to get elected to councils to and Muslims will find it difficult to protect their interests in government. But, if a certain number of seats were reserved for Muslims for which only the Muslims population of an area would vote, the Muslim members reaching the councils will be able to raise the concerns of Muslims.

Question 12.
Where was the Muslim League popular and weak?
Answer:
The Muslim League was popular in the United Provinces, Bombay and Madras. However, it was quite weak in the three provinces from which Pakistan was to be carved out just ten years later, viz. Bengal, the NWFP and Punjab. Even in Sind it failed to form a government.

Question 14.
Write about the Hindu Mahasabha and the RSS.
Answer:
The Hindu Mahasabha and the Rashtriya Swayamsevak Sangh (RSS) were engarged in active mobilisation. These organisations wished to unite all Hindus, overcome the divisions of caste and sect and reform their social life. They also gave out the message that India was the land of the Hindus who were in a majority. Many Congressmen were also impressed with the activities of these organisations.

Question 15.
Who coined the name Pakistan?
Answer:
The name Pakistan or Pak-stan was coined by a Punjabi Muslim student at Cambridge, Choudhry Rehmat Ali. In pamphlets written in 1933 and 1935, this young student desired a separate national status for this new entity.

Question 16.
What did the resolution demand?
Answer:
On 23 March 1940, the League moved a resolution demanding a measure of autonomy for the Muslim majority areas of the subcontinent. This ambiguous resolution never mentioned partition or Pakistan. However, in later years it came to be called the Pakistan Resolution.

Question 17.
What were the dreams of different sections from 1940 to 1946?
Answer:
From 1940 to 1946, the League was able to convince Muslim masses of the benefits and need for a separate nation. Peasants could think of state where Hindu zamindars and moneylenders did not exploit them. Traders, businessmen and job seekers could think of a state where competition from Hindu traders, businessmen and job seekers would not be there. There would be freedom for the Muslim elite to run the government the way they wanted.

Question 18.
Which was the ‘Quit India’ campaign?
Answer:
After the failure of the Cripps Mission, Mahatma Gandhi decided to launch his third majority movement against British rule. This was the “Quit India” campaign, which began in August 1942.

Question 19.
What impressions did the victories of Japan create on the people in India?
Answer:
The victories of Japan against the Americans and Europeans created a strong impression on the people in India. Firstly, it seemed that the European colonialists would get defeated very soon. Secondly, Japan was an Asian country and could stand up against the European colonialists. Indians felt that they too can stand up and fight against Britain decisively. The myth of the racist superiority of the British was smashed.

Question 20.
How were the Indian people after World War – II?
Answer:
People were restless with food shortages, rationing of food, high prices, black marketeering and hoarding. Workers were angry about low wages. Railway and postal employees and other government employees were planning to go on India wide strike against prices.

Question 22.
What is the significance of the year 1946?
Answer:
The year 1946 was a year of strikes and work stoppages in factories and mills in many parts of the country. CPI and the Socialist parties were active in these movements. The countryside was also on the boil.

Question 23.
Why did the small and poor peasants start an agitation in Bengal?
Answer:
Agitation was started in Bengal by small and poor peasants who took land of the bigger landowners to cultivate. They demanded that their share of harvest should be increased to two portions out of three instead of half or even less, that was given to them at that time. This was called the Tebhaga movement and was led by the Provincial Kisan Sabha.

Question 24.
Write about the Direct Action Day.
Answer:
The Muslim League decided that its demands cannot be met through discussions and it must ask people to come out on the streets. It decided on”Direct Action” for winning its Pakistan demand and announced 16 August 1946 as “Direct Action Day”. On this day, riots broke out in Calcutta, lasting several days and leaving several thousand people dead. By March 1947, violence spread to many parts of northern India.

Question 27.
Why did the British resort to the ‘Divide and Rule Policy’?
Answer:

Question 28.
Write any features liked by you in Mahatma Gandhi.
Answer:

Question 1.
“Religions have been playing a prominent role since the partition of India.” Write your evidences.
Answer:

So we should be grateful to our national leaders and freedom fighters, not to the Britishers.

Question 3.
Write a brief note on the assassination of Gandhiji.
Answer:

The British government, even without the consultation of the Congress government, decided that India will participate in the war. The Congress was torn in its mind over the question. Most Congress leaders were opposed to Hitler, Mussolini and the ideology of Fascism. They were determined to resist the Fascist drive to conquer other sovereign nations. The Congress expected that the British would see their double standards in the expectation that India should support them in fighting the Fascists but not give (or at least promise) India full freedom.

Comment on the double standard role of the British.
Answer:

Question 5.
Read the following paragraph and comment on it.

Agitation was started in Bengal by small and poor peasants who took land of the bigger landowners to cultivate. They demanded that their share of harvest should be increased to two portions out of three instead of half or even less, that was given to them at that time. This was called the ‘Tebhaga’ movement and was led by the Provincial Kisan Sabha.

Question 6.
How did the Indian National Army fight for Indian freedom? Explain.
Answer:

Question 7.
Read the given paragraph and write your opinion.

When India was divided, there was a problem of fear and threat among the Hindus and Muslims. Pakistan was separated as a new country and it was separated on the basis of religion. If Pakistan was separated on the basis of religion, all Muslims should go to Pakistan and all Hindus should be in Hindustan such discussions were also taken place but practically there were many problems for all this. This two religious people suffered of anger and hatred. Many were killed looted, and burnt each other. From Pakistan thousands of Hindus came to India as refugees. Many stayed on roads. Gradually they were settled relief camps. Insecurity feeling was developed among the Hindus and Muslims.

Question 9.
Look at the picture given below 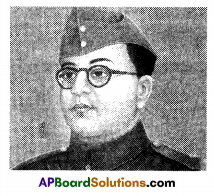 Question 11.
Read the following para and comment on “Divide and Rule of British.”

Question 12.
Read the letter of Gandhiji to Hitler and answer the following question.

DEAR FRIEND,
Friends have been urging me to write to you for the sake of humanity. But I have resisted their request, because of the feeling that any letter from me would be an impertinence. Something tells me that I must not calculate and that I must make my appeal for whatever it may be worth.

It is quite clear that you are today the one person in the world who can prevent a war which may reduce humanity to the savage state.

Must you pay that price for an object however worthy it may appear to you to be? Will you listen to the appeal of one who has deliberately shunned the method of war not without considerable success?
Any way I anticipate your forgiveness if I have erred in writing to you.

What was the appeal of Gandhi to Hitler?
Answer:

Question 13.
A few incidents of National movement are described here. Study them and answer the given questions.

Question 14.
Identify the following places related to National Movement in the given map of India. 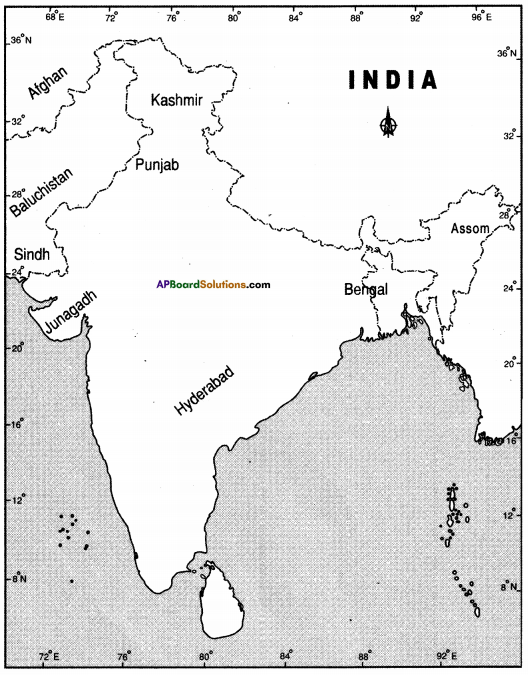 Question 15.
Locate the following in the given map of World.
1. Pakistan

3. This country was ruled by Dutch people
Answer: Indonesia 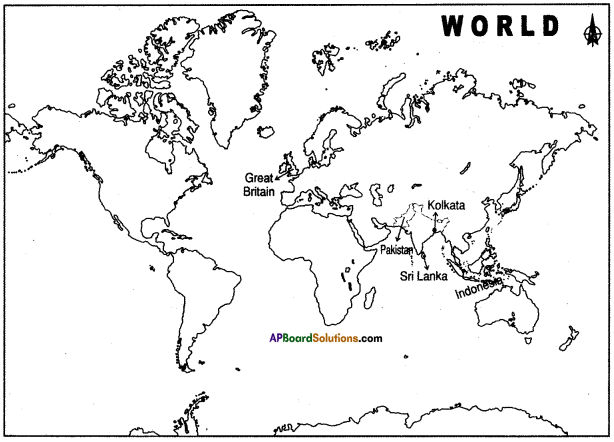