Question 1.
What was Slogan raised in American Independence? (SA-II : 2016-17)
Answer:
“No taxation without representation.”

Question 2.
What was the uniqueness of ‘Bloodless Revolution’? (SA-III : 2016-17)
(OR)
Why was the England revolution called as a bloodless revolution? (SA-I : 2018-19)
Answer:
The supreme power was transferred from king to parliament without shedding a drop of blood or firing a single shot.

Question 3.
What is the Jacobin Clubs? (SA-II : 2017-18)
Answer:
People who wish to discuss policies and plan their own form of action. These are called Political Clubs. One of such is Jacobin Club.

Question 4.
What was the effect of Glorious revolution? (SA-II : 2018-19)
Answer:
Not only was an absolutist catholic monarch removed, but the declaration of rights ensured the sovereignty of parliament and imposed significant limitations on the prerogatives of the crown.

Rights to the people; such as freedom of religion, freedom of speech, freedom of assembly and separation of powers. Women were denied from these rights.

Question 1.
What do you know about ‘bloodless revolution (or) glorious revolution? (SA-II : 2017-18)
Answer:
In 1688, William of Orange and his wife Mary were invited by the Parliament to occupy the throne of England. A new arrangement was worked out by which ministers were responsible to the Parliament and the powers of the king were restricted. The supreme power was transferred to Parliament, without shedding a drop of blood of firing a single shot.

i) Which revolution does the timeline indicate?
Answer:
American Revolution indicates in the above time line.

ii) In this revolution, against which country the people fought for their independence?
Answer:
England.

Question 1.
When the French Revolutionaries were preparing the declaration of Rights of Men in 1791, many French women protested against this and drafted a separate declaration of the Rights of Women. It declared – “Women are born free and remain equal to men in rights.
Read the above paragraph and explain your opinion on “Women – Right to Vote”. (SA-II : 2016-17)
Answer:
If the women has Right to vote the following benefits are there :

Answer the following Questions.
1. Jocabin constitution belongs to which country?
2. Which ideology was closely allied to the idea of National Unit?
3. Which stood for freedom for the individual and equality to all before the law?
4. Members of which class wee united by a common way of life?
Answer:

Question 3.
Observe the given table and answer the following questions. 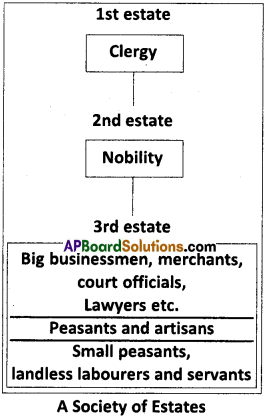 Question 4.
The picture below shows the political system under the constitution of 1791 in France. Observe it carefully and answer the questions given. 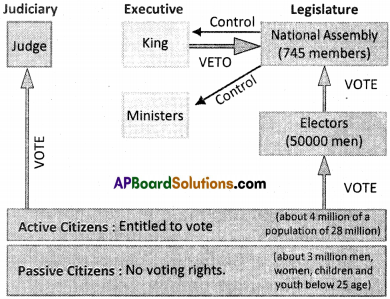 b) Who had the power over the King and the Ministers in the above system? (SA-II : 2018-19)
Answer:
National Assembly has more powers on king and ministers.

2. The French Revolution supported the motto of Liberty, Equality, Fraternity because it eliminated the old social classes, overthrew the monarchy and brought the church under state control. People of all social classes were citizens and they all had equal rights.

Liberty :
Liberty meant freedom from all soils of torture and abuse.

Equality :
Provide Equality to the people in all spheres without discrimination.

Fraternity :
It creates brotherhood nature among the people.

The above ideas provoke the middle class fight for equality and end of special privileges.

Question 1.
Compare the results of the English and American Revolutions. Which one managed to build entirely new principles of government?
Answer:

Question 2.
Can you think of why America was able to establish a democratic republic while England could not?
Answer:

Question 3.
In what ways did the American Constitution ensure maximum freedom for its people?
Answer:

Question 5.
Write about Bill of Rights of the American war of Independence.
Answer: 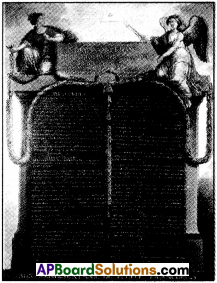 Answer:
The Declaration of Rights of Man and Citizen : 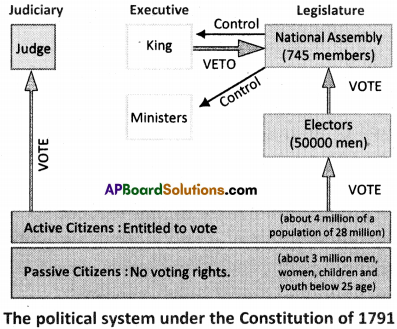 d) Did the king have absolute powers?
Answer:
No, he was under the control of the National Assembly.

Question 9.
Study the following timeline and answer the given questions. 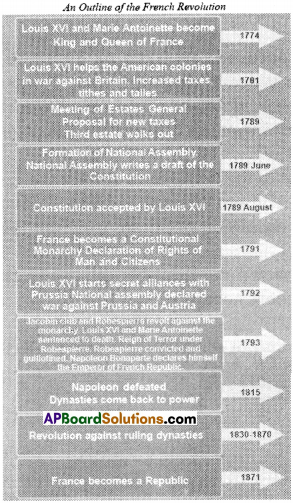 Question 10.
Do you feel that equality of status for women is necessary? Women’s fight for rights in France inspired the world. Do you agree with this?
Answer:

Question 11.
What would happen if all people were not equal before law – and some special privileges like the right to kill others?
Answer: 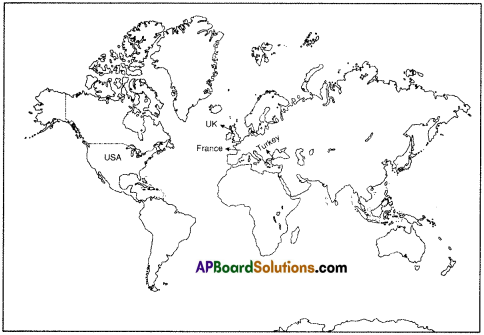 Question 14.
Who are the philosophers that spread the ideas of democracy?
Answer:

Question 16.
How different would our lives have been if we were ruled by kings?
Answer: