Question 1.
Scientifically what is density?
Answer:
Density is defined as mass per unit volume.

Question 3.
What instrument is used to determine the purity of milk?
Answer:
Purity of milk can be determined by using lactometer.

Question 7.
State Pascal’s principle.
Answer:
Pascal’s principle states that external pressure applied to an enclosed body of fluid is transmitted equally in all directions throughout the fluid.

Question 1.
Define density and give its units.
Answer:
Density is defined as the mass per unit volume.

Units : Relative density has no units.

The density of substance is more than water so the substance sinks in the water.

2. Density of water = 1 g cm-3.
As the density of substance is greater than that of water, so, the substance will sink in water.

2) We know that the pressure is thrust (force) per unit area.

Question 3.
Calculate the pressure at a depth ‘h’ in a liquid.
Answer: 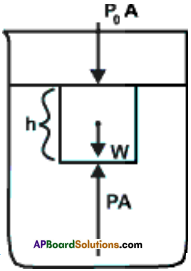 2) Consider cylindrical column of height ‘h’ from the surface of the liquid of cross sectional area “A”.

5) From Newton’s law we get

Question 4.
Calculate the pressure difference at different levels of depth in fluids.
Answer: 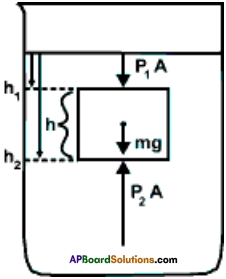 1) Let us consider a cylindrical column of liquid of height ‘h’ with cross sectional area
‘A’ and let ‘P’ be the density of the liquid.

6) The pressure difference between two levels in that liquid = hρg

7) Here ρ and g are constants, so the pressure difference increases with an increase in depth. 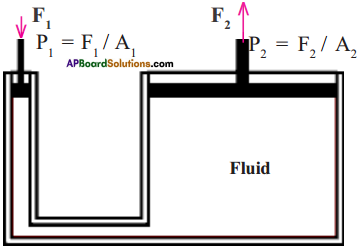