Question 1.
What is meant by Insolation?
The radiation received on the surface of a body is called insolation.

Question 2.
What is meant by Radiation?
Answer:
When a body gives out energy it is called radiation.

Question 9.
Give reasons for ditference in temperature of a location:
a) height from sea level.
b) distance from the sea
c) distance from equator
d) all the above
e) some of the above
Answer: d

Question 10.
What is the relation between temperature and rainfall?
Answer:
The amount of rain in 2 places is determined by temperature differences between them.

Question 13.
Which results in ‘Global Warming’?
Answer:
Some gases like CO2 prevent radiation of heat from the earth. CO2 in the atmosphere N increases due to increased use of diesel and petrol, cutting down of forests etc. If the CO2 proportion in the atmosphere increases, then less heat will be radiated causing increase in global temperature. This results in ‘Global Warming’.

Question 14.
Appreciate the ‘green houses’.
Answer:
Green houses are also called Glass houses. Green house is a building in which plants are grown. These are climate controlled. It works by taking sunlight and heating it up. This process is the conversion of solar energy to thermal energy. It gives plants both temperate heat and a good water source. The creation of green house is excellent.

Question 15.
What are the effects of ‘Global warming’?
Answer:
Global warming is the increase of Earth’s average surface temperature due to effect of green house gases, such as carbon dioxide emissions from burning fossil fuels or from deforestation.

Question 16.
The sun is the primary source of energy. The trees are the factories which produce food from sunlight. Are we growing or cutting down such trees? Discuss the advantages of trees and our responsibility in growing them.
Answer:
We are cutting down trees more than we grow.
The advantages of Trees:

Question 17.
Locate the following in the given world map. 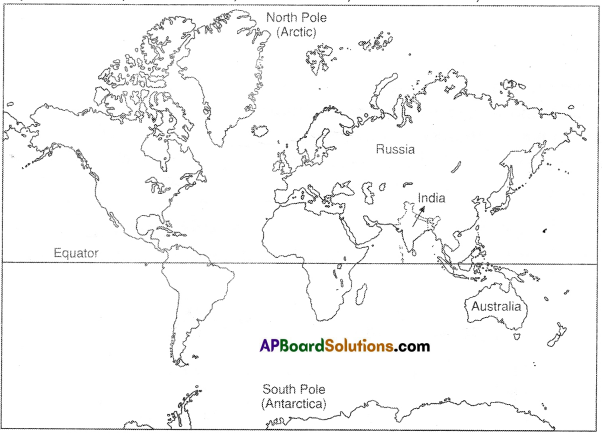 Question 18.
Observe the given map and answer the following questions. 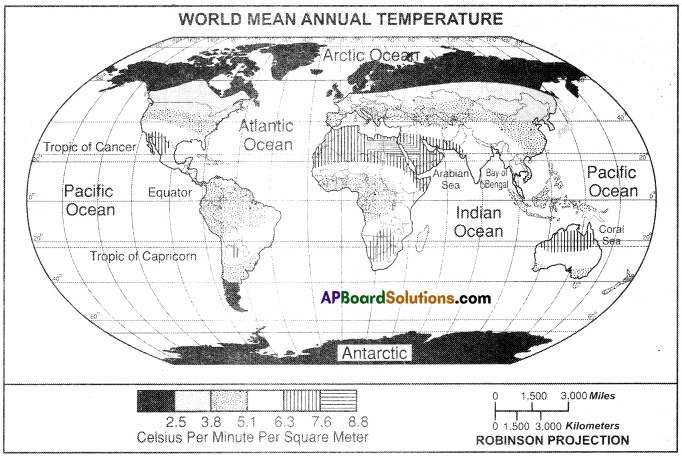 1. What is the line to south of equator?
Answer:
Tropic of Capricorn.

3. Which continents are there near to the equator?
Answer:
South America, Africa and Asia.

Project
Observe some families in your village / locality and fill up the following table.

Educate the families about the energy-saving measures and then conduct the same survey again after three month and compare the difference.
Answer:

Above families used more electricity bulbs especially tubes & bulbs. They are using very less CFL’s. By using more bulbs they get every month more electricity bill. That’s why, I explain to them about the importance of electricity, how we are wasting and our future generations will face the problems and I said, use more CFL’s to reduce the wastage of power & minimise the bill. After three months I went to their houses and saw the power bill really I admired because they reduce the power using and use CFL’s also. Due to this they save the power and get less electricity bill.