Question 4.
What is an electrolyte ?
Answer:
Electrolyte is a solution of substance through which current can pass.

Question 7.
In case of a fire, before the fire men use the water, they shut off the main electrical supply for the area. Explain why they do this.
Answer:
Fire men use water to put out fire. Water containing dissolved salts is a good conductor of electricity. If fire men pour water on fire the electrical appliances near the fire may be wet if anybody touches those appliances they may have electric shock. In order to avoid people to get electric shock due to wet electrical appliances the fire men shut off electrical supply before they use water.

Question 10.
Explain the process of coating copper on iron key. Draw the circuit diagram.
(OR)
Conduct an experiment for coating on iron key with copper by electroplating method and prepare a note.
Lab Activity
Answer:
Aim: Coating an iron key with copper by electroplating method.
Required material: Copper plate of size 2 cm x 5 cm, crystals of copper sulphate, a key made by iron, glass beaker, water, sulphuric acid, battery cell and some connecting copper wires.
Procedure: Dissolve crystals of copper sulphate in pure water to prepare concentrated solution. Pour the solution in a beaker and add a few drops of dilute sulphuric acid to it. 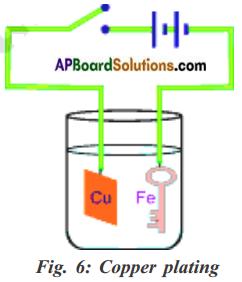 Tie one end of connecting copper wire to iron object to be coated with copper. Connect other end to the negative terminal of battery. Suspend the tied iron object into the copper sulphate solution. Suspend the copper plate into copper sulphate from positive end of the battery through a switch as shown in the above figure. Key and plate are a little away from each other. Put the switch on for about 10 minutes. Switch the circuit off and take the iron key out.
We can observe a red coating on iron key. The reason is when electric current is pass through copper solution, in which copper sulphate is present in the form of copper and sulphate ions. The copper ion gets drawn to the electrode connected to the negative terminal of the battery and deposited on it.

Question 11.
How do you appreciate the efforts of Luigi Galvani and Alessandro Volta in discovering a cell and making a stored electric energy available to human beings?
Answer:
We should have to thoroughly appreciate the efforts of Luigi Galvani and Alessandro for their discoveries for the development of mankind. Galvani and Volta completely change the life of human beings. Before that people generated electricity in different ways and conduct various experiments. However they faced one major problem which prevented them from understanding electricity in depth. They did not have a stable and permanent source of electricity. Galvani experimental conclusion was a revolution in science saying that all living beings contained electricity and it was the main source of life.
Volta proved it is possible to generate electricity if two different metals are placed in some liquids. Volta made first cell using zinc and copper dipped in sulphuric acid. This cell called Volta cell. Later dry cell was prepared. Now various appliances works with dry cells. So the efforts of Galvani and Volta should be appreciated by every generation for their contribution to electricity.

Question 12.
Collect the information and make a list of good conductors and bad conductors. Mow do you use this information in your daily life works?
Answer: 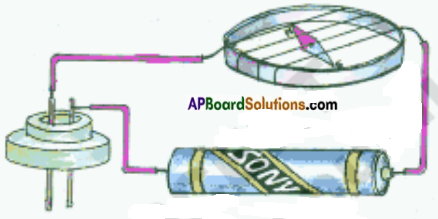 The magnetic needle deflects because whenever current pass through a wire it acts as a magnet is called magnetic effect of current.

Question 2.
If a battery is packed in a box and if only two wires from two terminals are given out, how can we decide the positive and negative terminal of the battery?
Answer:
Insert the wires into a potato. A greenish spot is seen on potato at one of the wires. That wire behave like positive terminal and the other is negative terminal.

Question 3.
What is electrolysis?
Answer:
The dissociation of a solution of compound into constitute ions or elements by passing current is called electrolysis.
e.g. Electrolysis of water, which produce oxygen and hydrogen gases.

Question 1.
Testing the material to know which allows electric current to pass through it.
Answer:
Take a torch bulb or LED (Light Emitting Diode), a dry cell, wooden sheet, two drawing pins, a key (safety pin) and pieces of connecting wires. Set up the electric circuit as shown in the figure. 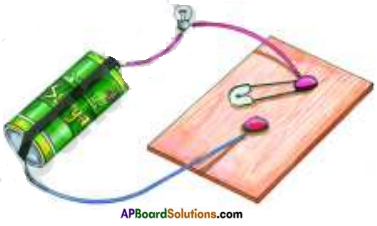 Place the key on drawing pin. The bulb begins to glow as soon as the key touches the drawing pin. Now replace the key by a nail.
Does the bulb glow ?
Yes, the bulb glows.
Repeat the activity using different types of materials instead of the nail, say a strip of paper, a piece of chalk, a drinking straw, a piece of plastic, a paper clip, a rubber eraser, etc.
Note in each case whether the bulb glows or not and enter your observations in table. 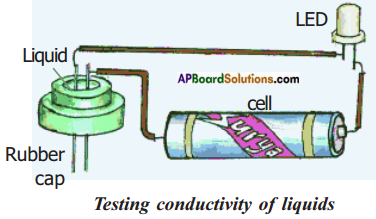 See that the two metal pins, pass through the cap and should have a very small gap (around 2 mm) between them so that the pins are fairly closer but not touching each other. The LED should not glow when pins are separated by small distance.
Now, join the free ends of pins together by pressing them for a moment and make sure that the LED glows. Release the pins they get separated and LED should not glow. This acts as a tester.
Fill the rubber cap with different liquids like distilled water that we drink, coconut oil, kerosene, lime juice, mustard oil, sugar solution, etc one after another and in each case check whether the LED glows or not. Note down your observations in table.

a) Why doesn’t the LED glow in all the cases? Or why doesn’t the LED remain off in all the cases?
Answer:
The LED doesn’t glow all the cases because when the liquid the two pins of tester allows electric current to pass through, the circuit is completed (closed) and the LED glows. On the other hand when the liquid does not allow the current to pass through, the circuit is incomplete (open) and the LED does not glow.

b) In the above activity, you may have observed that in all those cases where the LED glows, its brightness (intensity) is not the same. Sometimes it may be brighter and sometimes it may be relatively dimmer. Why is that so?
Answer:
The intensity of the glow of the LED depends on the flow of electric current through the circuit. Although a liquid may be a conductor, it may not allow current through it as easily as a metal does.
As a result although the circuit is completed and the LED glows, due to weak current in case of some of the liquids, the intensity of glow would be lower compared to other liquids.

Question 3.
Transforming a poor electric conductor into a good conductor.
(OR)
Conduct an experiment for testing the electric conductivity of electrolyte.
Answer:
Take some amount of distilled water in three different containers. Dissolve small quantity of common salt in the water of first container. Dissolve the copper sulphate, lemon juice in second and third container respectively.
Use the tester that we used in activity 2, and repeat the activity 2. Note the observations in table.

Question 4.
Testing the effect of electric current on potato.
Take a potato. Cut into two halves and take one half of it. Construct tester with LED bulb. Insert two copper wires of the tester into the potato. Leaving some distance (around 1 cm) between them. 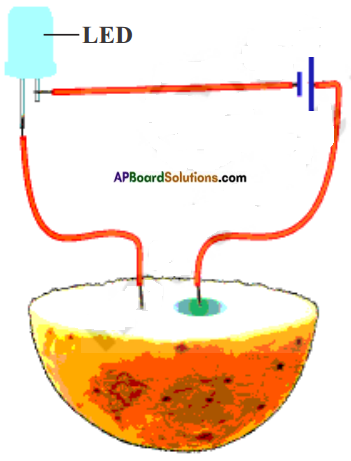 a) Dose the LED glow?
Answer:
Yes, the LED glows.
Leave the inserted wires for 20-30 minutes.

c) What could be the cause behind this change?
Answer:
There is chemical change occurred in the potato.

d) Will other vegetables also show such an effect?
Answer:
Vegetable like carrot, beetroot, cucumber, radish, sweet potato show the chemical change there by the LED glows.

Question 5.
Make your own cell.
(OR)
Draw the diagram of electrolytic cell and explain.
Collect two injection bottles. Cut two 5 cm long bits of thick copper wire. Use sandpaper to scrap about 1 cm of the coating off both ends of the wires.
Break open a exhausted dry cell and remove its outer metal covering (made of zinc). Cut two 2 mm wide and 5 cm long strips from this zinc plate. Insert the copper wires and zinc strips into the rubber caps of the injection bottles as shown in figure. Ensure that the copper wire and zinc strips do not touch each other. 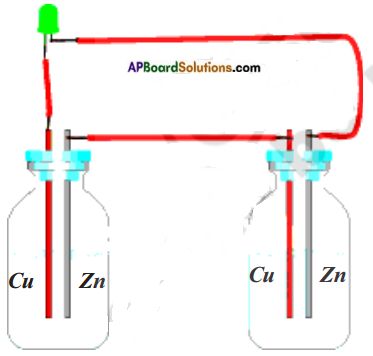 Now take a wire and connect the copper wire of one bottle with the zinc plate of the other bottle. Fill both bottles with dilute sulphuric acid. Carefully close the bottles with the caps in which copper wires and zinc strips are inserted. Your cell is ready.
How will you test it?
Take an LED. Attach two wires to its two terminals. Touch the wire from one terminal to the zinc plate and the wire from other terminal to the copper wire. Did the LED light up ? If not, change the connections vice-versa. Did the LED glow ?
Repeat the above activity using lemon juice, tamarind juice and tomato juice one by one instead of sulphuric acid to make cells.

a) What other liquids can be used to make the cell?
Answer:
Acid solutions.

b) Will detergent solution be useful?
Answer:
Yes, it is useful.

c) How does above cell function?
Answer:
After a few seconds of immersion of zinc and copper into dilute sulphuric acid, zinc slowly begins to dissolve in the sulphuric acid. We can see bubbles getting formed on the copper rod.
The current is passed from copper rod to zinc rod. Here chemical energy is converted into electric energy by electrolysis method.