Question 1.
State whether the following statements are True or False. Rewrite the wrong statements correctly.
a) A body can be at rest and in motion at the same time in relation to the same set of surroundings.
b) A passenger flying in an airplane is at rest with respect to the airport and moving with respect to other passengers.
c) The wheels of a train are in rotatory motion as well as in translatory motion, when it moves.
Answer:
a)

c) The wheels of a train are in rotatory motion as well as in translatory motion when it moves.

Question 5.
Arun completed a 100-meter race in 16s, while Karthik finished it in 13s. Who ran faster?
Answer:

Question 13.
When do you say an object is in rotatory motion?
Answer:
1) Motion of all particles of a moving object follow a circular path with respect to a fixed centre of axis of rotation.
2) Then the motion of the object is said to be in rotatory motion.

Question 14.
Can an object possess translatory and rotatory motion at the same time? Give an example.
Answer:

Question 15.
Make a collection of action pictures showing living and non living things in motion. Paste them neatly in a scrap book. Under each picture write the type of motion the picture shows.
Answer:

Question 17.
Gather the information about the apparatus used to measure time in olden days.
Answer:
Candle Clock: A candle clock is a thin candle with consistently
spaced markings (usually with numbers), that when burned, indicate the passage of periods of time. While no longer used today, candle clocks provided an effective way to tell time indoors, at night, or on a cloudy day.

Hourglass: An hourglass (sandglass, sand timer, sand clock, egg timer) measures the passage of a few minutes or an hour of time. It has two connected vertical glass bulbs allowing a regulated trickle of material from the top to the bottom. Once the top bulb is empty, it can be inverted to begin timing again. 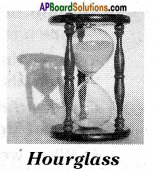