I. Fill in the blanks.

3. The part of respiratory system which branches into
a) Nasal cavity
b) Bronchi
c) Lungs
d) Trachea
Answer:
b) Bronchi

Question 1.
What is respiration?
Answer:
The oxygen reacts with the glucose present in digested food and breaks it down into Carbon dioxide and water to release energy. This process is called Respiration.
Glucose + Oxygen → Carbon dioxide + water + energy

(b) Anaerobic respiration: oxygen does not involve in this process
Glucose → Carbon dioxide + alcohol + Energy

Question 3.
Write the differences in composition of inhaled and exhaled air.
Answer:

Question 4.
Explain in detail the pathway of respiration in humans with the help of a flowchart.
Answer:
Parts that form the pathway of air in human respiratory system are
1) Nostrils,
2) Nasal cavity,
3) Pharynx,
4) Wind pipe,
5) Bronchi,
6) Lungs.

Question 5.
What are the different respiratory organs seen in animals and their method of working?
Answer:
The organs of respiration are different in different organisms.
A. Tracheae : 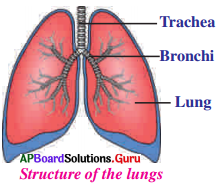 Question 6.
If the diaphragm and ribs do not expand and contract what will be the consequences?
Answer: 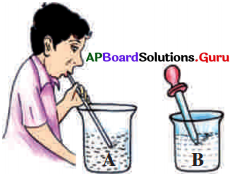 What you see:
Lime water is clear and colourless in beaker B , but it turns milky white in beaker A when it reacts with carbon dioxide.

8. Prepare slogans to create awareness about a) evil effects of smoking b) COVID-19 prevention.
Answer:
a) Evil effects of smoking :
Smoking is injurious to health.
Say YES to NO SMOKING
Be smart, Don’t start
Smoking? You must be joking
You don’t have to smoke to be hot!
Be Cool – Don’t Be a Smoking Fool
Don’t take smoke as a joke
Smokers are jokers
Don’t put your lips on fire

Question 9.
Make use of the Stethoscope made by you to measure the number of heart beats of five of your friends and note down your findings in the table given.
Answer:

Question 1.
How fish could breathe in water?
Answer:
Fish has gills, the specialized organs to absorb the dissolved oxygen present in the water. Hence, fish breathe through gills.

Question 2.
Why humans and other animals cannot breathe in water?
Answer:

Question 3.
What is breathing?
Answer:
The process of inhalation and exhalation of air is called Breathing.

Question 5.
Now hold a finger under your nose and slowly release the air. How do you feel now? Do you feel air moving outwards?
Answer:
Yes.

Question 7.
How are the lungs expanding and contracting?
Answer:

Question 8.
Why does the amount of oxygen vary between inhaled and exhaled air?
Answer:
Because the oxygen in inhaled air is absorbed in the lungs.

Question 9.
Which gas has increased in quantity in the exhaled air? Why?
Answer:

Question 10.
In which beaker does the lime, water turned milky white?
Answer:
Beaker ‘A’.

Question 11.
What does this change indicate?
Answer:

Question 14.
What about the smoke inhaled by smokers?
Answer:

Question 15.
Do all animals have the same type of respiratory organs?
Answer:
No.

Question 16.
What are the respiratory organs in whales?
Answer:

Question 17.
Why is the skin of frog always wet and slimy?
Answer:

Question 18.
How do plants breathe?
Answer:

Question 20.
What changes did you observe in the lime water?
Answer:
The lime water turns milky white.

Question 21.
Why was there a change in the lime water?
Answer:
The carbondioxide, which was released by the plants (sprouts)’is turned lime water milky white.

Question 22.
How does blood reach al! parts of the body?
Answer:

Question 23.
How is the oxygen and glucose absorbed by the blood transported to all the parts of our body?
Answer:

Question 26.
What is a Pandemic?
Answer:
A disease which infects most of the people in a country or the whole world at the same time is called a Pandemic.

Question 27.
How can we prevent it?
Answer:
We can prevent any disease or infection by improving our immunity.

Question 28.
Why do we sneeze?
Answer:

Question 30.
What is first aid?
Answer:
The simple assistance provided to a person suffering from injury or serious situations before a doctor attending is called First Aid.

Question 31.
What is the first aid tor drowning?
Answer:
When a person drowns we should first bring him out of the water and make him lay down on the back with the face turned to one side. Check for any sand or mud in the nose, mouth and ears and remove them.

Now, slowly press the abdomen to create pressure on the diaphragm and on the lungs to push out the water that has entered the lungs. Repeat the process by turning the person to lie on the abdomen until recovery. Give some warm clothing and hot tea on recovery.

Question 1.
Why is the right lung larger than the left lung?
Answer:

Question 1.
Make use of a water bottle with water and two straws to test your lungs power.
Answer:

Method of construction :
Cut the plastic bottle to half its size. Fix two small balloons at both ends of the Y-tube. Make a small hole in the cork and fix the Y-tube through the hole as shown in the picture. Cut the large balloon into two halves and fix one half tightly around the open part of the bottle.

Method of working :
Hold the balloon at the middle and pull it slowly downwards. The balloons become inflated (Expands), Now leave the balloon free. Then the balloons collapse (contracts).

Question 1.
How do you perform breathing by an activity?
(OR)
Do an activity to show the stages in breathing?
Answer:

Question 2.
How do you prove that there is a difference in the size of the chest cavity during inhalation and exhalation process?
(OR)
Fill in the table with an activity.

5. We can conclude from this activity that there is a difference in the size of the chest cavity during inhalation and exhalation process.

Question 3.
How do you prove that there is more carbon dioxide in exhaled air when compared to inhaled air?
Answer:

Question 4.
How do you prove that the sprouting seeds respire to take in oxygen and leave out carbon dioxide?
Answer:
Take a wide mouthed bottle and place a handful of sprouting seeds in it. Prepare some fresh lime water in a small container and place it carefully in one corner of the bottle. Close the cap of the bottle and apply vaseline on the edges to make it air-tight. Leave the apparatus undisturbed for a day or two. After two days open the cap and carefully take out the lime water container and observe the changes. 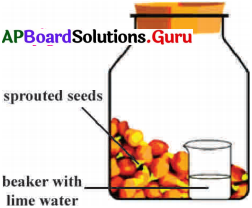 1. What changes did you observe in the lime water?
Answer:
The lime water changes into milky white colour. 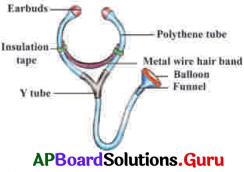 Working:
Keep upper two rubber tube ends in your ears. Put the funnel on the chest of your friend and observe the sound of heart beat.