Look at the following picture and answer the questions. 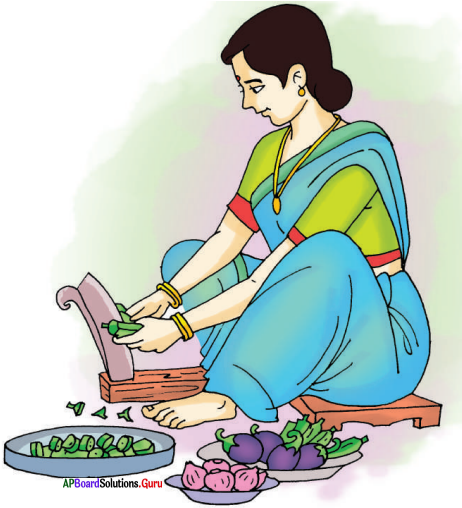 Question 1.
What is the woman doing?
Answer:
The woman is cutting vegetables.

Question 3.
Why should we eat vegetables?
Answer:
We should eat vegetables because they provide nutrients and vitamins for our bodies. They provide us health benefits. They keep us strong and healthy.

Question 4.
What curry did you take last evening?
Answer:
I ate tomato and egg curry.

Question 6.
Which vegetable do you like most? Why?
Answer:
I like carrot most because it is sweet and it protects our eyes.

A. Match the following.

B. Put the following sentences in the order of events.

Question 2.
What did Ramu do when he found a purse?
Answer:
When Ramu found a purse, he gave it to the vendor.

Question 4.
Have you ever got back the things you lost?
Answer:
I have lost my pens and books several times at school. I have got them back every time.

Question 5.
What reward did Ramu get for his honesty?
Answer:
He got the vegetables he needed free of cost.

Question 6.
Why does Ramu carry a jute bag?
Answer:
He does not use polythene bags as they are not environmental friendly.

Question 7.
What vegetables do you eat every day?
Answer:
I eat carrot, brinjal, spinach, cucumber, tomato and beans.

A. Classify the vegetables given. (Refer.to a dictionary for help).

B. Find the names of fruits from the grid given below and draw a box around them. 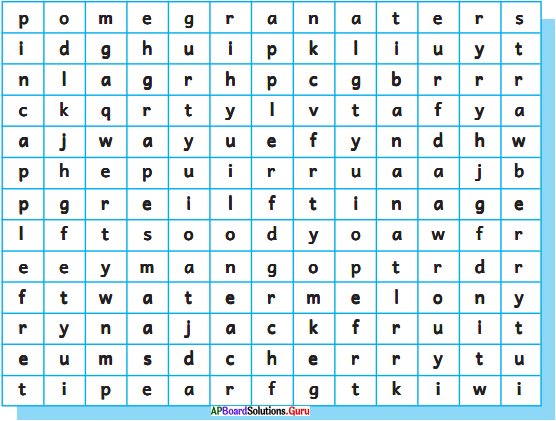 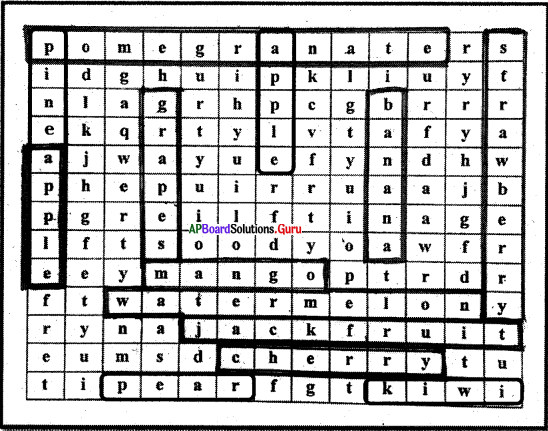 The names of fruits I identified in the grid:

A. Read the following paragraph.

Last evening I went to my friend Ravi’s house. Ravi’s father was washing clothes. I asked him about Ravi. “He is inside,” he said. I went in. Ravi was cutting vegetables. His sister was helping him. His mother was cooking. Two little kittens were playing there. Their grandmother was watching a cricket match on TV. Ravi asked me to sit beside him. His mother gave me some payaaam. I felt very happy to see them all. A happy family!

The verbs ‘was washing’, ‘was cutting’, ‘was helping’, ‘was cooking’, ‘were playing’, ‘was watching’ indicate the ongoing actions in the past. They are in the Past Continuous Tense or Past Progressive Tense. The form of such verbs is ‘was/were+ Vj + ing’.

i) Now fill in the blanks with the correct forms of verbs given in brackets.

ii) Write as many sentences as you can from the substitution table given below. 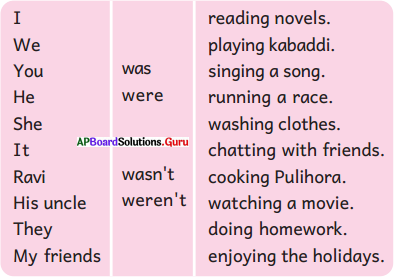 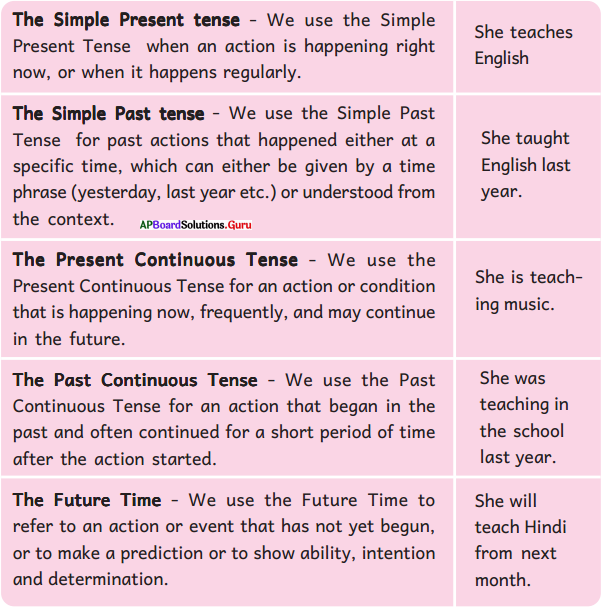 B. Read the following sentences.
Ramu found a purse.
A purse was found by Ramu.

Both the sentences mean the same. The first one says that Ramu did something. The second sentence says that something is done. The first sentence is said to be in the Active Voice because its subject (Ramu) is active and does something. The second sentence is said to be in the Passive Voice because its subject does nothing, but passively allows something to be done to the object (purse).

Read the following pairs of sentences. 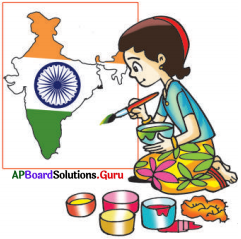 i) Rajuni drew the picture (Active Voice)
The picture was drawn by Rajani. (Passive Voice) 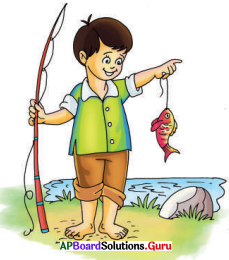 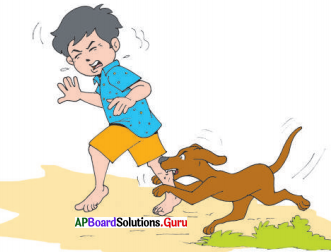 iii) The dog bit the boy. (Active Voice)
The boy was bitten by the dog. (Passive Voice) 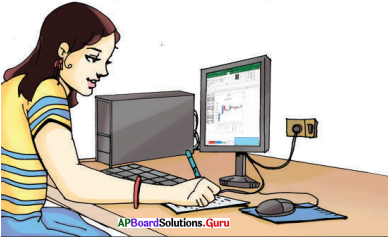 iv) She wrote many stories. (Active Voice)
Many stories were written by her. (Passive Voice)

C. Write the following sentences in the Passive Voice.

1. They built a house.
2. Hari ate two laddus.
3. James opened the door.
4. Mithali Raj played a match.
5. Janaki gave us some chocolates.
6. Rahul’s team won the kabaddi match.
7. They made three kites.
8. Sobhan celebrated his mother’s birthday.
9. Basha sang that song.
10. Veena asked an interesting question.
Answer:
1. A house was built (by them).
2. Two laddus were eaten by Hari.
3. The door was opened by James.
4. A match was played by Mithali Raj.
5. We were given some chocolates by Janaki. / Some chocolates were given to us by Janaki.
6. The kabaddi match was won by Rahul’s team.
7. Three kites were made (by them).
8. Sobhan mother’s birthday was celebrated by him.
9. That song was sung by Basha.
10. An interesting question was asked by Veena.

In the lesson you have read that/Ramu uses a ‘Jute Bag’ to carry vegetables. He never uses plastic bags. Plastics cause a lot of problems to us.

Now write a paragraph about the hazards (problems) caused by plastics. You can use the following hints.

B. Picture based Story Writing
Look at the picture and develop a story by using the hints given in the box. Give a suitable title to the story. The beginning of the story has been given. Write it in your notebook. 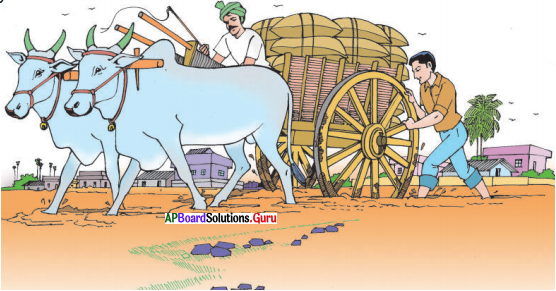 Once a farmer had a bullock cart. One day he was driving his bullock cart to the market.
Answer:
Once there was a farmer. He grew vegetables. On a rainy day he was going to market on his bullock cart. There was mud on the road in some places. The cart was stuck in the mud. He beat his bullocks to pull the cart but no use. He was helpless and prayed to God. A young man came and helped the farmer. They pushed the cart and the cart moved on.

A. Read the following sentences.

B. Observe the following picture. 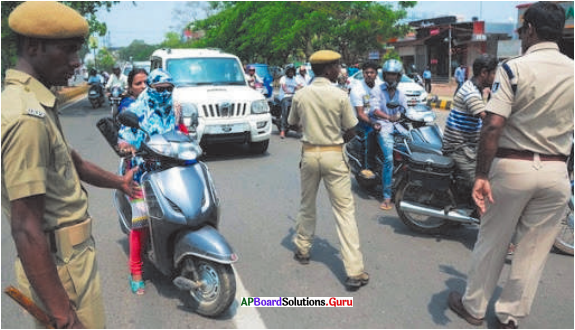 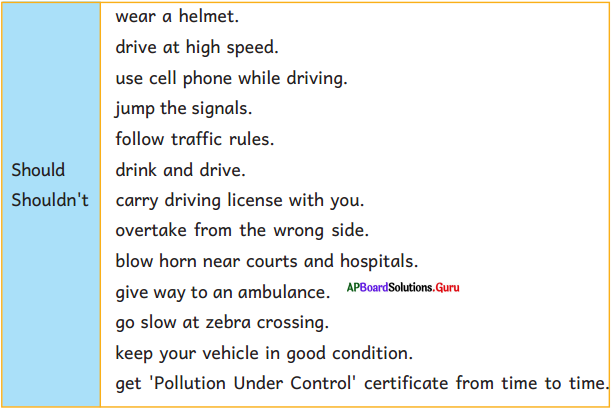 C. Find a suitable advice to the problems and match them. 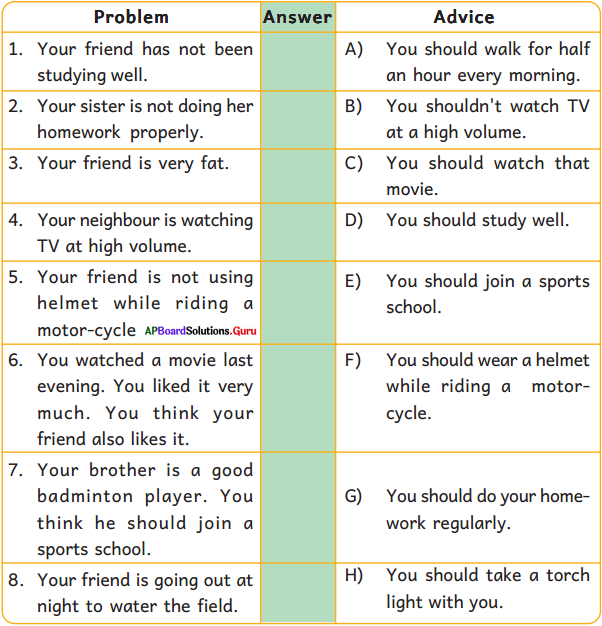 D. Read the following announcements made at the APSRTC Bus-station, Nellore.

“Your attention please, Service No.5993 super-luxury bus from Nellore to Bangalore will start from platform No. 12 at 10.00 p.m. Passengers having reservation are requested to board the bus.”

“Your attention please, the passenger of Seat No. 30 of Service No. 4559 Bangalore bus is requested to board the bus immediately. The bus is about to start.”

“Your attention please, Service No. 3887 Vennela A/C bus from Visakhapatnam to Chennai is ready to start from platform No. 2.”

Now imagine that you are an announcer at a bus-station. Make an announcement using the following details.

Answer:
Your attention please, Service No. 9667 Garuda A/C service from Vijayawada to Kadapa is on platform No. 18. The bus starts at 11.00 p.m. 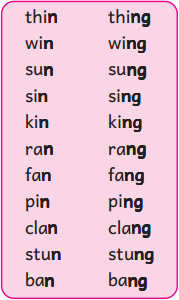 Refer to a dictionary and say two more pairs of words ending with ‘n’ and. Tig’.

THE TWO FRIENDS AND THE BEAR

Sheela and Jhansi were friends. One day they were travelling through a forest. Suddenly they came across a bear. The bear saw them and rushed out upon them. Sheela was good at climbing trees.Without waiting for her friend, she caught hold of a branch of a nearby tree, climbed it, and hid herself among the leaves.

Jhansi did not know what to do. She had heard that bears do not harm dead animals. So, she threw herself flat down upon the ground.The bear, coming up to her, put its muzzle close to her ear and sniffed and sniffed. But Jhansi lay very quietly and did not even breathe. At last with a growl it shook its head and went away.

Sheela climbed down the tree slowly. She asked Jhansi, “What was it that Mr.Bear whispered to you?”

“He told me,” said Jhansi, “Never trust a friend who deserts you at a pinch.” 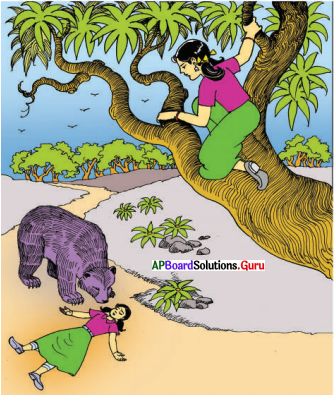 Answer the following questions orally.
1. What is the animal mentioned in the story?
Answer:
A bear

2. Who climbed the tree?
Answer:
Sheela

3. Did Sheela take Jhansi onto the tree along with her?
Answer:
No.

4. What did Jhansi do to save herself from the bear?
Answer:
She threw herself flat down upon the ground as if she were dead.

5. Did the bear kill Jhansi?
Answer:
No.

Answer the following questions orally.
1, Who had a big family?
Answer:
Abhi

2. Where did Adi put the sack of rice?
Answer:
In Abhi’s store

3. Who did Adi see on the night of the second day?
Answer:
Abhi

4. Did the brothers love each other?
Answer:
Yes.

The following chart tells you about ’How to make tea’. Study it carefully and answer the questions orally. 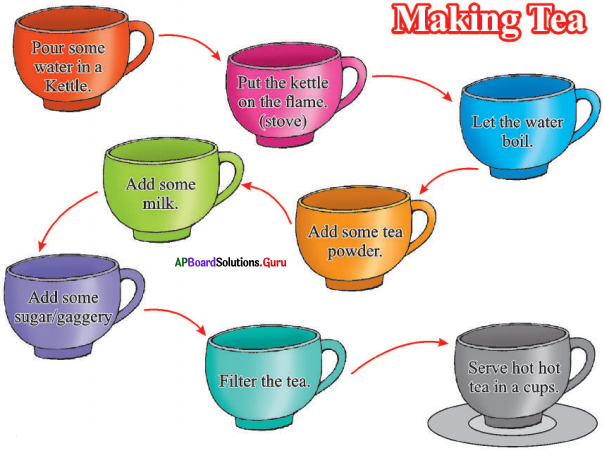 Answer the following questions orally.
1. What things do we need to make tea?
Answer:
We need water, milk, tea powder and sugar.

2. Should we boil the water?
Answer:
Yes.

3. What should we do after boiling the water?
Answer:
We should add some tea powder.

4. What should we do after adding sugar or jaggery?
Answer:
We should filter the tea.

1. Recite and enjoy this poem.
Tomatoes are red, beans are green,

A brinjal has a crown, just like a queen.
Potatoes are brown, onions are pink,
Carrots have juice which I can drink.
Vegetables make us healthy and wise.
So eat some daily with roti and rice.

2. Look at the spelling of the following words. What do you observe?

Such words which are same when reversed are called ‘Palindromes8. ‘

At The Vegetable Shop Summary

Ramu went to a vegetable shop to buy vegetables. At the shop all the vegetables wished to be bolight by Ramu for their good qualities. Ramu wanted to buy all of them but he had only eighty rupees in hand. Meanwhile, he found a money purse among the pumpkins in the’shop. He gave the purse to the vendor. The purse belonged to the vendor. The vendor felt happy and recognised Ramu’s honesty. So, he offered Ramu to take all the vegetables he needed free of cost. He offered a plastic bag to Ramu to carry the vegetables. But Ramu refused to use the plastic bag offered by the vendor. He used the jute bag brought by him.

Abhi and Adi were two brothers They loved each other. They were hard-working farmers. They would share the yielding equally. One day Adi thought that his brother Abhi would need more paddy and kept a bag of paddy in Abhi’s storeroom secretly. But the next day he found the same number of paddy bags in his storeroom. So the next night he was carrying another bag to his brother’s room. While carrying the bag, he found Abhi carrying a paddy bag to his storeroom thinking the same way. They found each bag of paddy.