Question 1.
Observe the map and answer the questions given below. 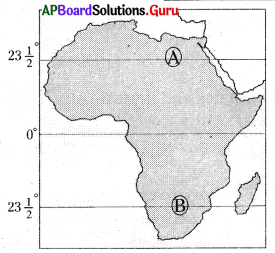 a) Write the name of the latitude which passes through the Region – A.
Answer:
Tropic of Cancer.

b) Write the name of the latitude which passes through Region – B.
Answer:
Tropic of Capricorn.

Question 2.
What are the countries that are pointed by “1 and 2” Africa map are given below? 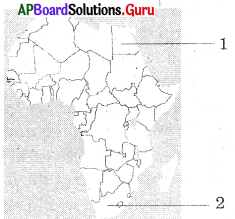 Question 3.
Read the given table and answer the following questions.

i) Which continent does not have any dessert?
Answer:
Europe Continent.

Question 4.
Discuss how Africa is richer than other continents in natural resources. In spite of its richness, why do you think African countries are still underdeveloped?
Answer:
In the beginning, Africa was a rich continent compare with the other world in natural resources.
Reasons for why it is not developed:

Question 5.
Into how many physical features can Africa be divided? What are they?
Answer:
Africa can be divided broadly into four physical regions namely

Question 6.
What are Savannas?
Answer:

Question 7.
How to reach India from Africa? Which ocean has to be crossed?
Answer:

Question 9.
Name some bays and gulfs on the African coast.
Answer:
Bays: Bays of Djibouti, Bay of Yemen, Bays of Somalia, Bays of Madagascar.
Gulfs: the Gulf of Sidra, Gulf of Guinea, Gulf of Suez, Gulf of Aden.

Question 11.
How is the lifestyle of people in Africa?
Answer:
People with different languages, lifestyles and habits live in different regions of Africa. Since ancient times, people have lived in small tribes, carrying out hunting, gathering, animal husbandry and agriculture. Hunters have inhabited the equatorial regions and the deserts, Pastoralists inhabited the high plateaus and Savanna, grazing their animals on the extensive grasslands. Agriculture has long been carried out on river banks as well as on the margins of forests. There were several cities on the coasts where traders from distant countries came to trade.

Question 12.
Mention the products which were exported to Europe.
Answer:
The Europeans exported African timber, minerals etc., on a very large scale to Europe. In fact, the gold and diamond mines in Southern Africa are still under the control of European companies. Zambia and Zimbabwe have priceless mines of copper. This mineral has long been an important export item. Europeans established plantations to grow tea, coffee, rubber, tobacco, etc.

Question 13.
Observe the following table carefully and answer the questions given hereunder.
Answer:
Africa at a Glance

b. Which is the biggest country in Africa?
Answer:
Sudan

c. Which country in Africa is called the gift of Nile?
Answer:
Egypt

Question 14.
Read the following para and answer the questions.
Slave Trade
In the 16th century, many Europeans began migrating to America and started cultivation there. There was plenty of land in America, but not enough people to work in the fields. To fill the gap the slave trade from Africa began.
a. In which century many Europeans began migrating to America?
Answer:
In the 16th century.

b. Why did Europeans enter America?
Answer:
Because there was plenty of lands.

c. Who wanted to establish their rule over Africa?
Answer:
Europeans

d. Which continent is known as the Dark continent?
Answer:
Africa

e. Who benefited from the slave trade?
Answer:
Americans

Question 16.
Why is Egypt called the gift of Nile?
Answer:

Question 18.
Locate the following rivers and seas on the map of Africa. 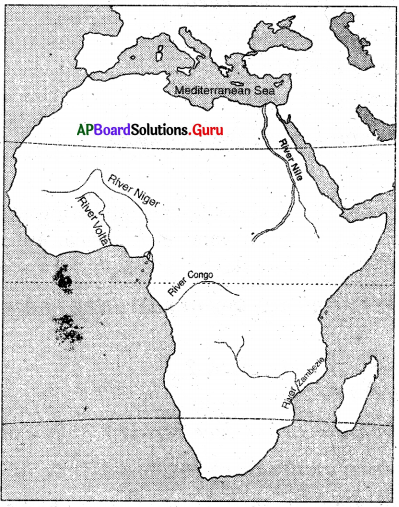 Question 19.
Observe the following map of Africa and answer the questions. 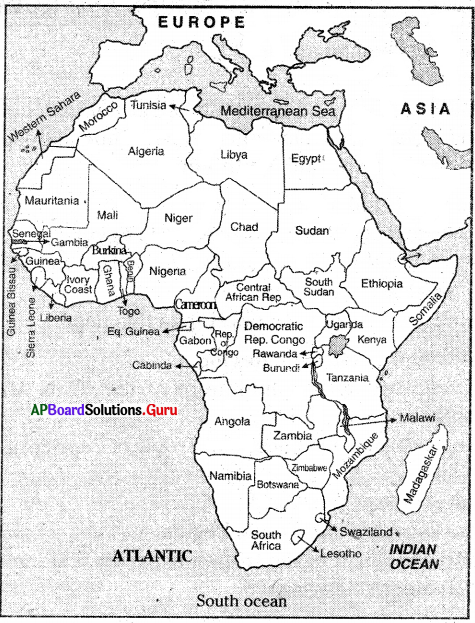 a. Which country is called the “Gift of Nile”?
Answer:
Egypt

b. Where do camels live?
Answer:
In the Sahara desert.

c. In what countries does the Sahara desert extend?
Answer:
It extends to Mauritania, Mali, Niger, Chad, Sudan, Egypt, Ethiopia and Somalia.

d. What is the western boundary of Africa?
Answer:
Atlantic ocean

e. What is the southern boundary of Africa?
Answer:
South ocean

Question 20.
Look for Africa on the world map and write about its neighbouring countries. 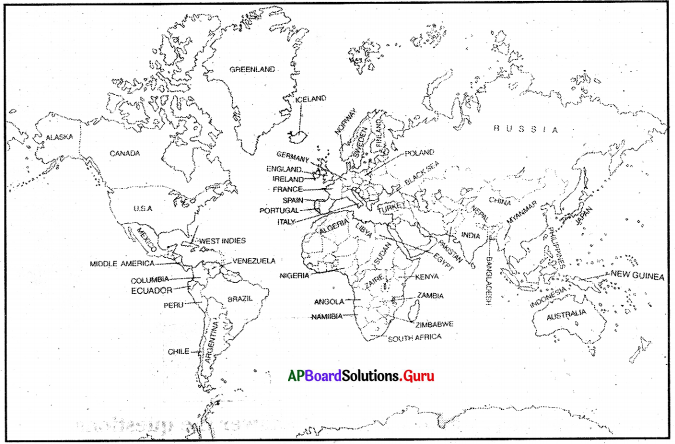 Question 21.
Look for Africa on the world map and name the oceans that surround it. 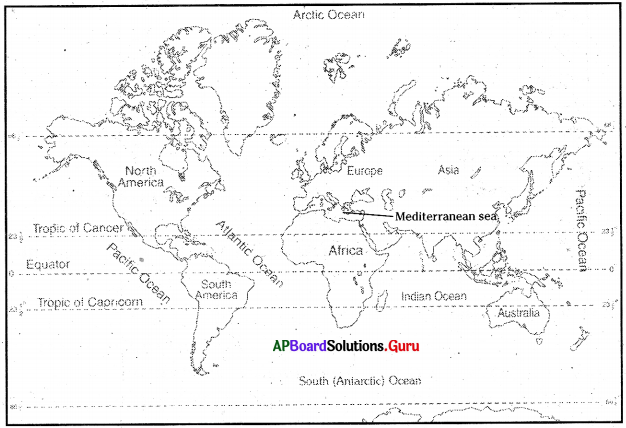 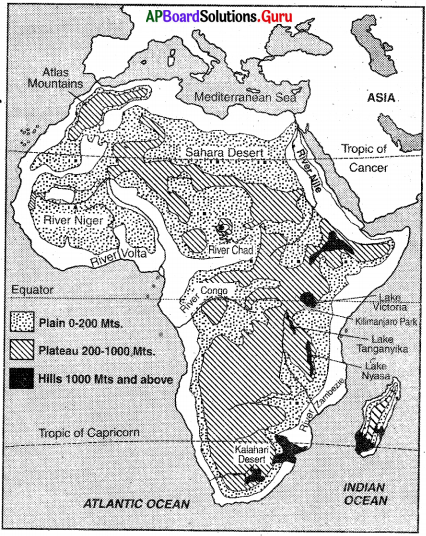 c. The height of the high plateaus in the south and east of Africa is ….
Answer:
100 mts

d. In the north are the Mountains.
Answer:
Atlas

e. What is the height of the Kilimanjaro peak?
Answer:
5895 mts

f. Identify two other lakes in Africa, other than Lake Victoria and write down their names.
Answer:
Lake Nyasa, Lake Tanganyika

Question 22.
What are the regions of highest rainfall?
Answer:
A large part of Africa, on both sides of the Equator, receives heavy rainfall. These regions are in Central and Western Africa. They have dense forests due to heavy rainfall and warm climate.

Question 23.
How were the slaves greatly oppressed by Americans?
Answer:
The slaves were greatly oppressed. Many of them died by the time they reached the ports. The ships were stuffed with slaves. There were no proper arrangements for food or medicine. In those days, it took a long time to reach America. Many slaves did not survive the journey due to illness and malnutrition.
Even in America, inhuman treatment was meted out to them. Despite working hard, they were not given proper food or living quarters. In this manner, millions of Africans were enslaved and taken to North and South America and the nearby islands. Lakhs of people died after being made into slaves.

Question 24.
Write about the deserts of Africa.
Answer:

The Kalahari desert extends in Namibia, Botswana and Angola in South – West Africa.