Question 1.
The details of workers in a paper mill are given in the table below. Study the table and answer the following questions.

b) How are contractual workers different from casual workers in terms of “Other benefits”?
Answer:
Contract labour job may or may not become permanent after 3 years.
But permanent worker enjoys all benefits along with the permanent job.

c) Why do you think a large number of workers in the mill are not permanent? Explain briefly.
Answer:
Skilled labour is need throughout the year. But unskilled labour is needed whenever the work is there. So companies appoint more labour temporarily why because if ‘ the worker is temporary in manner, there is no need to provide all facilities. This is the benefit to the owner.

Question 2.
Read the table and answer the following questions. 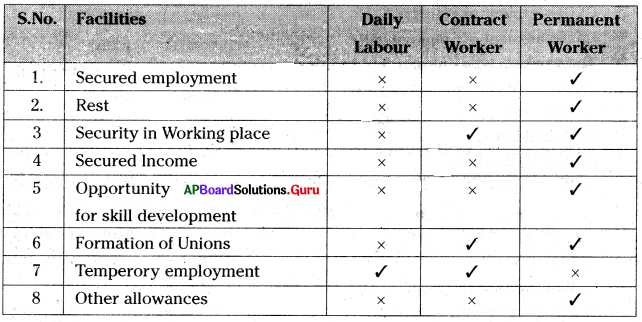 i) Write any two facilities of contract labour.
Answer:

iv) What do you understand about daily labour?
Answer:
Daily labour enjoys only temporary employment if he did not do the work, not gaining any wage.

Question 3.
What rights and securities have the workers been fighting for?
Answer:

Question 5.
What are the benefits available to the permanent workers?
Answer:

Question 6.
What is the difference between a permanent worker and a badli worker?
Answer:
Workers who are employed permanently, who are provided with regular and high wages and whose employment is secured, and who can enjoy all the facilities such as Provident Fund, Employees State Insurance and all types of allowances are called permanent workers.
Workers who are employed on a casual basis, who replaced permanent workers in their absence, are called badli workers. They get very little salary and very few benefits like Provident Fund and Health Insurance etc.,

Question 8.
What kind of machines tools and sources of power are used in brick production?
Answer:
Any machines and tools are not used in brick making except the moulds to shape the clay into bricks. No power is used for making bricks. Only the muscle power of the workers is used for mixing the clay, shaping the clay into bricks by using moulds. In all levels of brick making, no machinery is used. For transport of the clay, sand and dried bricks to the kilns, bullock carts or tractors are used.

Question 10.
Read the following passage.
Over the last two hundred years, workers all over the world have fought to get these rights recognised even though they may not be implemented in all places. In most countries, the governments have agreed that these are the basic needs of workers and made laws that ensure workers these rights. Governments also have Labour Departments which have the responsibility to ensure that these laws are followed. If the laws are not followed workers can file cases in courts.
Now answer the following questions.
a. What did the workers all over the world fight for?
Answer:
To get their rights recognised

b. Are the rights of the workers being implemented everywhere?
Answer:
No. Not in all places

e. Which department has the responsibility to ensure that their laws are followed?
Answer:
The labour department.

b. Which workers have been given the rights of the workers?
Answer:
The regular workers.

c. What kind of workers have not been given the rights of the workers?
Answer:
Casual or contract workers.

d. Which type of factory is not supervised by the government?
Answer:
The factories are not properly registered with the government.

Question 12.
Read the following passage:
This company (not a real name) mixes and packs medicines for another big medicine company. It employed about 118 workers of whom about 104 workers were employed as daily casual workers. That is only 14 workers were regular and permanent and were used for the skilled work of mixing the chemicals to prepare the medicine powder. They were paid about Rs. 1500 to Rs 2500 per month and had security of employment. They also got ESI and PE The remaining 104 workers who were engaged on a daily basis mainly did the packaging and labelling of the medicine. About 56 of them were women. These daily workers were engaged by a labour contractor who was told every day by the manager how many workers to engage.
Now answer the following questions.
a. Which company is talked about in the above passage?
Answer:
A multinational medicine company.

b. How many workers work in the factory in total?
Answer:
118

d. How many workers are skilled labour?
Answer:
Only 14

e. What are the benefits availed by the permanent workers?
Answer:
They get Rs. 2500/- as salary, they have the security of employment. They also get ESI, medical insurance and Provident Fund.

Question 13.
Read the given passage.
A Trade Union is an organisation formed by workers to protect their interests. If every single worker has to negotiate with the employer separately, they will not be in a strong position. However, if all of them negotiate, their position will become stronger. Trade Unions negotiate on behalf of all workers with the government and the employers. They seek to ensure proper wages, other benefits and decent working conditions for their members. Collectively with their member workers, they secure social security benefits, medical facilities, houses, Provident Fund and pension. If any worker is harassed or is in need of help, the Trade Union takes up his or her cause. Unions adopt a variety of measures like negotiations, filing cases in the law courts and even strikes or stoppage of work to pressurise the employers.
Now answer the following questions :
a. What is a trade union?
Answer:
An organisation formed by workers for protecting their rights.

b. What do the trade unions work for?
Answer:
Ensuring proper wages, other benefits and decent working conditions for its number.

d. What is it that conducts negotiations with the government and employers?
Answer:
The trade union.

e. What are the social security benefits the workers should get?
Answer:
Medical facilities, houses, provident fund and pension.

Question 14.
Read the following Passage.
In Andhra Pradesh and other states of India, towns and cities are becoming bigger and bigger. People are rapidly shifting from villages to these towns. But many of them do hot get sufficient regular employment there and are doing a variety of odd jobs. They sell vegetables or other items, make and sell snacks, work in tea stalls, or small factories, stitch clothes, load and unload in markets, work as domestic maids, etc.
Many of them produce goods at home – weavings clothes, papads, pickles, doing embroidery, etc. and are engaged through the putting-out system.
Now answer the following questions:
a. Why are towns and cities becoming bigger and bigger?
Answer:
Because people are rapidly shifting from village to village.

b. Why, do the people end up as casual workers in cities?
Answer:
Because in cities they do not get any regular jobs.

d. What is the system that the workers of the informal sector are engaged through?
Answer:
Putting out system.

e. Growth of cities leads to the growth of ……….. labour in cities.
Answer:
Casual

Question 15.
Here is a bar diagram. Based on the answer the questions below:

b. There are more women casual labourers than male casual labours during all three years.
Answer:
The statement is true.

Question 18.
Below are three pie charts of working people in the entire Andhra Pradesh, rural and urban areas. Study them and answer the questions.

a. Of all the working persons in Andhra Pradesh 45% are …………….
(self-employed, salaried, casual labourers)
Answer:
Casual labourers.

b. Of all the rural working people in Andhra Pradesh 7% are …………….
(self-employed, salaried, casual labourers)
Answer:
Salaried

Question 20.
Why do you think people migrate for work in other distant states?
Answer:
In their own place, people may have a small plot of land, with which they cannot get on. They are in debt and on the verge of selling their land. They don’t get regular employment in their villages. Because of the closing down of the factories and mills, the workers of these factories migrate to cities and join the ranks of casual workers.

Question 21.
Which of the seven rights are available to brick kiln workers like Bandhani?
Answer: