Question 1.
Here are the list of items that you can use for making a table on social movements. Draw a table based on them and find out similarities and differences amongst movements:
Main area of focus of the movement; location, main demands, modes of protest, important leaders; response from the state; possible impact on society.
Answer: 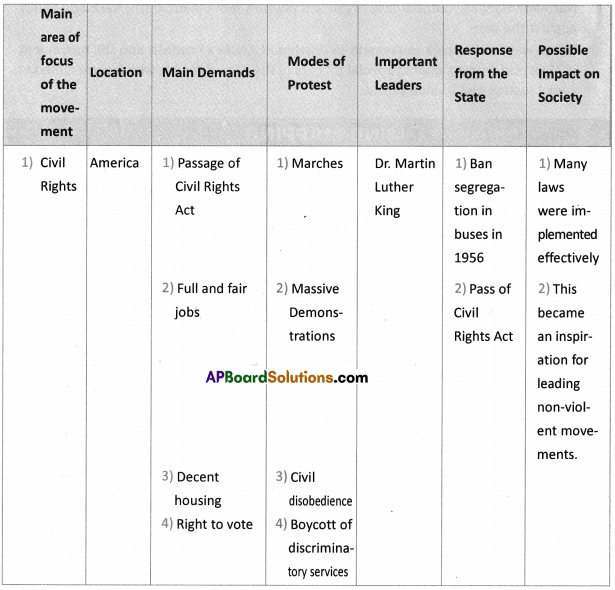 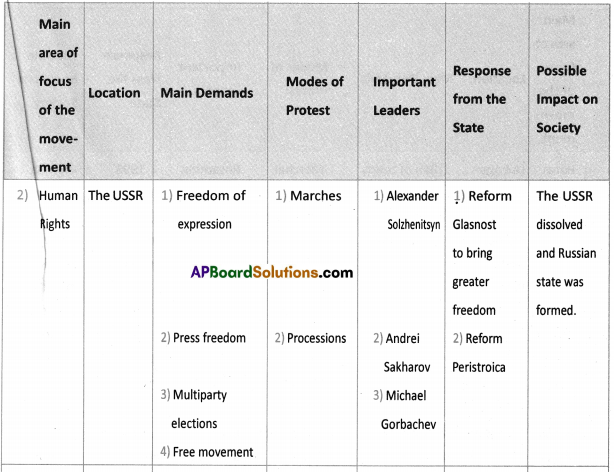 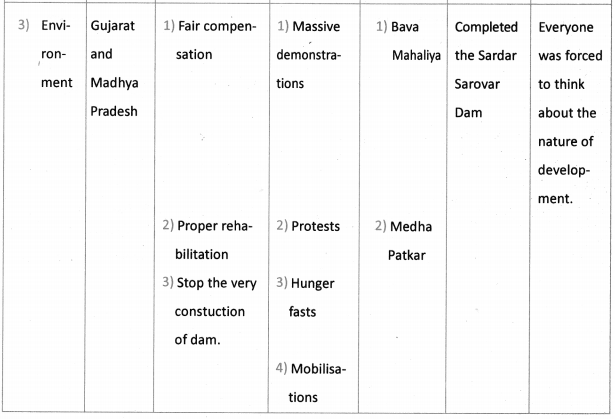 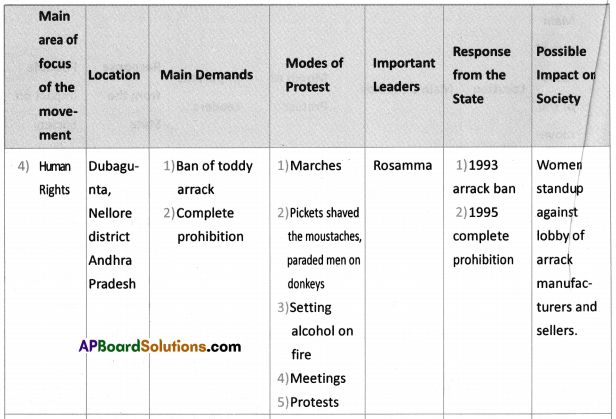 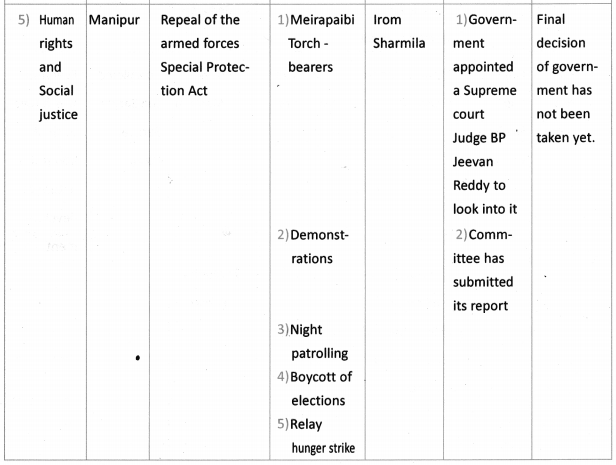 Question 2.
Kanayya, Ramya and Salma have a debate. They have different expectations. Whom would you agree with and give reasons, from the context of human rights? Ramya argues it is okay to restrict the freedom of the press, etc. but ensure people do not live in poverty. Salma argues it is food alone is not important but equally important to have freedom of press because there is no other way people would know if there is violation of dignity of people in different parts of the country. Kanayya says, how will it make a difference if press belongs to the rich and powerful people, why would they cover things that ordinary people expect.
Answer:

Question 4.
How is the role of the ordinary individuals described in the above case studies ?
Answer:

Question 5.
How are the rights of black people in the USA and Meira Paibi movements similar or different?
Answer:

Question 6.
Democracies have been identified as most prominent political systems across the world.
Do you think it has been able to take care of all expectations of people. Based on the examples cited in these chapters, write a short note on ‘democracy and social movements’. 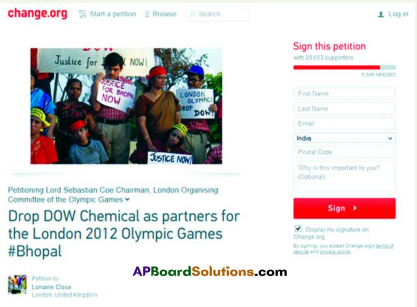 Question 7.
Discuss and find out how movements mobilise people from across the globe like in the above instance of campaign to protest in the context of Bhopal gas tragedy.
Answer:

Question 1.
Try to read the famous speech of Dr King and write an essay on the ideals he set for American society and how he planned to achieve it.
Answer:
Martin Luther king set many ideals for the American society. Some of them are,
а) Justice
b) Liberty
c) Equality
d) Unalienable rights of life
e) Pursuit of happiness
f) freedom
g) Democracy etc.

He plans to achieve the ideals in the following ways:

Question 2.
Make a table and list the demands of civil rights movement and possible solutions in your opinion.
Answer:

Question 3.
The USA claims to be a democracy, yet it kept certain groups of people segregated, till middle of last century. Discuss how the idea of democracy need to be more inclusive in our context.
Answer:

Question 4.
Why do we hear different voices within a movement? Can you identify differences in them?
Answer:

Question 5.
Can you think of similarity or differences in the nature of political system in the USA and the USSR and how was their response to people’s rights?
Answer:

Question 6.
“We Won’t Go”
America has a law which requires all able bodied citizens to enroll in the army for a short period. During the Vietnam War, thousands of citizens refused to get drafted into the army to fight in Vietnam. Let us read about one such protest refusal. This is a statement that appeared in a newspaper, Harvard Crimson:

“We, the undersigned, as American men of draftage, may be asked by our government to participate in the war in Vietnam. We have examined the history and the nature of this war, and have reached the conclusion that our participation in it would be contrary to the dictates of our consciences. We therefore declare our determination to refuse military service (all citizens are required to do so by law) while the United States is fighting in Vietnam. Our intention in signing this statement is to unite with other draftage men who share our convictions, in order to turn our personal moral rejection of this war into effective political opposition to it.”

Some thought that these people were being un-patriotic while others thought that they were justified in refusing to participate in an unjust war. Discuss the two points of view in the class and write a short note of arguments of both sides and your own viewpoint.
Answer:

Question 7.
What were the different types of responses to the weaponisation?
Answer:

Question 8.
If people from different countries meet each other, there would be less chances of war, than the governments alone deciding the policy with each other. Would you agree with this statement? Give reasons for the answer.,
Answer:

Question 9.
Explain how environmental issues can affect people of nations who may have no role in deciding the location of nucelar plants, polluting factories, etc. How do you deal with such situation?
Answer:

Question 10.
Look up the website of Greenpeace movement (http : //www.greenpeace.org/international) to find out about the issues they have been fighting for and how the methods they have used for fighting. Find out about the debates and controversies about this movement too.
Answer:
Students’ Activity.

Question 11.
Is it impossible to build factories or mines or power plants without throwing out farmers or tribal people? What can be the alternatives? Discuss in your family and school on these issues.
Answer:

Question 12.
What were the various strategies used by the social movement?
Answer:

Question 13.
How do the people in movement see the process of resettlement promises?
Answer:

Question 14.
Find out about more recent such struggles in West Bengal (Nandigram), Odisha (Niyamagiri) and Andhra Pradesh (Polavaram, Sompeta etc). Prepare a poster explaining the main features of the struggle in each of these cases.
Answer:
Nandigram (West Bengal):