Students can go through AP SSC 10th Class Maths Notes Chapter 9 Tangents and Secants to a Circle to understand and remember the concepts easily.

→ The path followed by a circular object is a straight line.

→ The line segment joining any two points on a circle is called a ‘chord’. The longest of all chords of a circle passes through the centre and is called a diameter.

→ There are three different possibilities for a given line and a circle.

→ The word tangent is derived from the Latin word “TANGERE” which means “to touch” and was introduced by Danish mathematician“Thomas Fineke” in 1583.

→ There is only one tangent to the circle at one point.

→ The tangent at any point of a circle is perpendicular to the radius through the point of contact.

The radius OP is perpendicular to \(\stackrel{\leftrightarrow}{\mathrm{AB}}\) at P.
i.e, OP ⊥ AB.

→ Construction of a tangent to a circle:
Draw a circle with centre ‘O’.
Take a point ‘P’ on it. Join OP.
Draw a perpendicular line to OP through ‘P’. 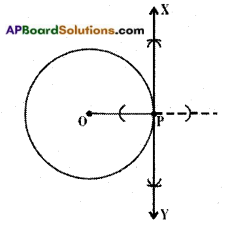 Let it be \(\stackrel{\leftrightarrow}{\mathrm{XY}}\)
XY is the required tangent to the given circle passing through P. 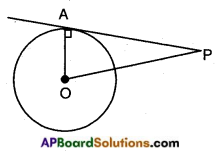 → Two tangents can be drawn to a circle from an external point. 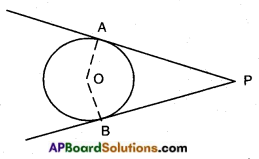 → Construction of tangents to a circle from an external point:
Step – 1: Draw a circle with centre ‘O’ and with given radius.
Step – 2: Mark a point ‘P’ in the exterior of the circle and join ‘OP’.
Step – 3: Draw the perpendicular bisector \(\stackrel{\leftrightarrow}{\mathrm{XY}}\) to \(\overline{\mathrm{OP}}\), intersecting at M.
Step – 4: Taking M as centre, MP or OM as radius, draw a circle which intersects the given circle at A and B. 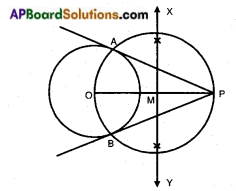 Step – 5: Join PA and PB. PA and PB are the required tangents.

→ Consider a circle with centre ‘O’. PA and PB are the tangents from an exterior point ‘P’. Then, the centre of the circle lies on the bisector of the angle between two tangents drawn from the exterior point P.
∠OPA = ∠OPB 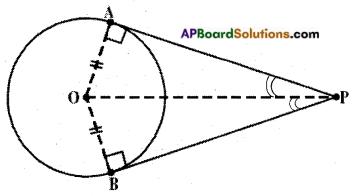 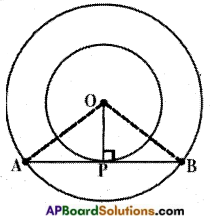 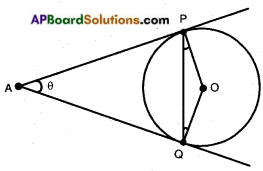 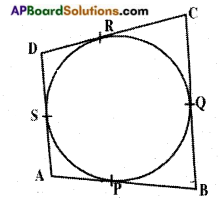 → The region enclosed by a secant/chord and an arc is called a ‘segment of the circle’. 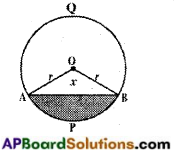