→ In our daily life, we can measure the heights, distances and slopes by using some mathematical techniques.

→ The mathematical techniques which come under a branch of mathematics is called ‘trigonometry’.

→ “Trigonometry” is the study of relationships between the sides and angles of a triangle.

→ Early astronomers used to find out the distances of the stars and planets from the Earth. Even today, most of the technologically advanced methods used in engineering and physical sciences are based on trigonometrical concepts.

Consider ∠CAB as A where angle ‘A’ is acute.
Since AC is the longest side, it is called “Hypotenuse”.

→ Now observe the position of side BC with respect to angle A. It is opposite to angle ‘A’ and we can call it as “Opposite side of angle A”.

→ And the remaining side AB can be called as “Adjacent side of angle A”.

→ Trigonometric Ratios:
The ratios of the sides of a right angled triangle with respect to its acute angles, are called Trigonometric ratios.

→ Consider a right angled triangle ABC having right angle at B as shown in the given figure.

Then, trigonometric ratios of the angle A in right angled triangle ABC are defined as follows:

→ There are three more ratios defined in trigonometry which are considered as multiplicative inverse of the above three ratios. 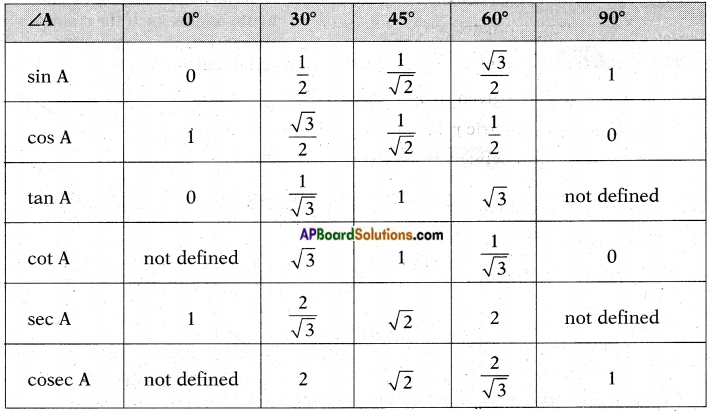