Question 1.
Newlands proposed the law of octaves. Mendeleeff suggested eight groups for elements in his table. How do you explain these observations in terms of modem periodic classification? (AS1)
(OR)
Correlate various tables proposed on classification of elements.
Answer:

2) Dissimilar elements placed together :
a) Elements with dissimilar properties were placed in same group as sub-group A and sub-group Bt
Eg : Alkali metals like Li, Na, K, etc. of IA group have little resemblance with coinage metals like Cu, Ag, Au of IB group.

b) Cl of VII A group is a non-metal and Mn of VII B group is a metal.

2. The elements with similar outer shell (valence shell) electronic configurations in their atoms are in the same column called group in modern periodic table. So the elements have similar properties overcoming the Mendeleeffs second limitation.

2) s – block elements :
i) If the differentiating electron enters in s-sub-shell, then the elements are called s-block elements.
ii) IA (1), IIA (2) group elements belong to this block.

5) f – block elements :
i) If the differentiating electrons enter in f-sub-shell, then the elements are called f-block elements.
ii) These are divided into two types
a) Lanthanides (41 elements),
b) Actinides (5f elements).
iii) These are also called as inner transition elements.

Advantage of this classification :
1) The systematic grouping of elements into groups made the study simple.
2) Each period begins with the electron entering a new shell and ends with the complete filling of s and p-sub-shells of that shell.

Question 5.
Given below is the electronic configuration of elements A, B, C, D. (AS1)

4. To which group and period does the element ‘C’ belong?
Answer:
Element ‘C’ i.e. ‘P’ belongs to 3rd period and VA group.

Question 7.
a) State the number of valence electrons, the group number and the period number of each element given in the following table : (AS1)

b) State whether the following elements belong to a Group (G), Period (P) or neither Group nor Period (N). (AS1)

Question 11.
Complete the following table using the periodic table. (AS1)

ii) Across a period:
When we move left to right in a period, the metallic character decreases.

I. a) Atomic radius :
Period :
Atomic radius of elements decreases across a period from left to right because the nuclear charge increases due to increase in atomic number.

Group :
Atomic radius increases from top to bottom in a group due to addition of new shell.

b) Ionization energy:
Period :
When we move from left to right it does not follow a regular trend but generally increases due to increase in atomic number.

Group :
In a group from top to bottom, the ionization energy decreases due to increase in atomic size. –

Group :
Electron affinity values decrease from top to bottom in a group.

Group :
Electronegativity decreases from top to bottom in a group.

Question 19.
Name two elements that you would expect to have chemical properties similar to Mg. What is the basis for your choice? (AS2)
Answer:

Question 20.
On the basis of atomic numbers predict to which block the elements with atomic number 9, 37, 46 and 64 belong to? (AS2)
Answer:

Question 24.
Aluminium does not react with water at room temperature but reacts with both dil. HCl and NaOH solutions. Verify these statements experimentally. Write your observations with chemical equations. From these observations, can we conclude that Al is a metalloid? (AS3)
Answer:

Question 25.
Collect the information about reactivity of VIIIA group elements (noble gases) from internet or from your school library and prepare a report on their special character when compared to other elements of periodic table. (AS4)
Answer:
Reactivity of Noble gases :

Question 28.
Without knowing the electronic configurations of the atoms of elements Mendeleeff still could arrange the elements nearly close to the arrangements in the Modern periodic table. How can you appreciate this? (AS6)
Answer:

Question 29.
Comment on the position of hydrogen in periodic table. (AS7)
Answer:

2) Elements are placed in the periodic table according to the increasing order of their electronic configuration.

Fill In The Blanks

1. Lithium, ……………… and potassium constitute a Dobereiner’s triad.
2. ……………… was the basis of the classifications proposed by Dobereiner, Newlands, and Mendeleeff.
3. Noble gases belong to ……………… group of periodic table.
4. The incomplete period of the modern periodic table is
5. The element at the bottom of a group would be expected to show …………….. metallic character than the element at the top

4. Which of the following is the most active metal?
A) lithium
B) sodium
C) potassium
D) rubidium
Answer:
D) rubidium

Question 5.
How does the valency vary on going down a group?
Answer:
The valency is constant when we move from top to bottom in a group because the number of valence electrons are same for same group elements.

Question 7.
Which one between Na and Na+ would have more size? Why?
Answer:

Question 8.
Which one between Cl and Cl– would have more size? Why?
Answer:

b) Mg2+ has smaller size because Mg2+ has 10 electrons and 12 protons whereas Na has 11 electrons and 11 protons. So the distance between nucleus and outermost orbital is less in Mg2+ due to greater nuclear attraction.

Question 10.
What relation about elements did Dobereiner want to establish?
Answer:
Dobereiner wanted to give a relationship between the properties of elements and their atomic weights.

Question 11.
The densities of calcium (Ca) and barium (Ba) are 1.55 and 3.51 gem-3 respectively. Based on Dobereiner’s law of triads can you give the approximate density of strontium (Sr)?
Answer:
Molecular weight is directly proportional to density.

Question 12.
Do you know why Newlands proposed the law of octaves? Explain your answer in terms of the modern structure of the atom.
Answer:

Question 13.
Do you think that Newlands’ law of octaves is correct? Justify.
Answer:
No, there are some limitations of Newlands’ model:

Question 14.
Why did Mendeleeff have to leave certain blank spaces in his periodic table? What is your explanation for this?
Answer:
1) Mendeleeff predicted that some elements which have similar properties with the elements in a group are missing at that time.
2) So he kept some blanks in the periodic table by writing ’eka’ to the name of the element immediately above the empty space.
3) Later these elements are discovered and they are fitted into those empty spaces.

Question 15.
What is your understanding about Ea2O3, EsO2?
Answer:

Question 18.
If lanthanoids and actinoids are inserted within the table, imagine how the table would be?
Answer:
It looks very big in size, and it is difficult to identify, as these elements have similar properties.

Question 20.
The calculated electron gain enthalpy values for alkaline earth metals and noble gases are positive. How can you explain this?
Answer:

Question 1.
Observe the following table. Establish the relationship of other elements given in the table. 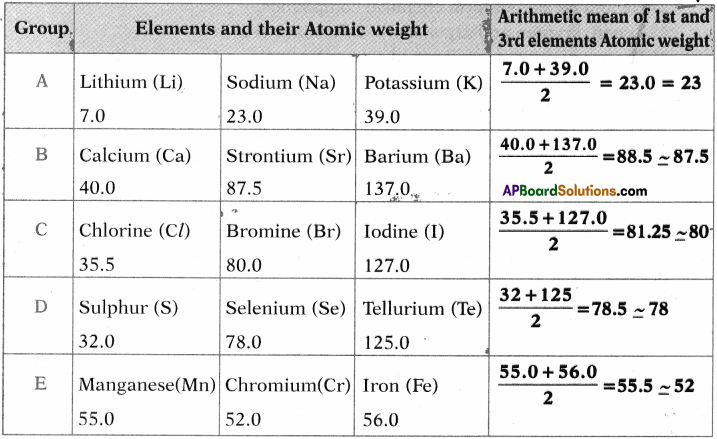 Question 2.
Some main group elements of s-block and p-block have family names as given in the following table.
Observe the long form of a periodic table and complete the table with proper information. 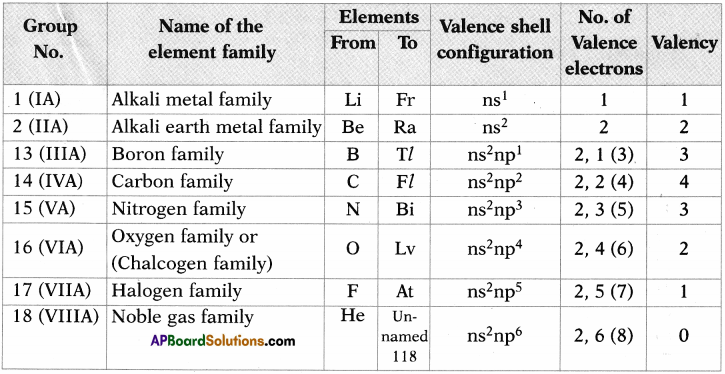