Question 3.
Name the carboxylic acid used as a preservative. (AS1)
Answer:
Vinegar with chemical formula CH3COOH is used as preservative. 5 – 8% of solution of acetic acid or ethanoic acid in water is called vinegar and it is used widely as preservative in pickles.

iii) A chloride derived from propane.
A) 1-Chloro propane. Its formula is CH3CH2CH2Cl.

Question 6.
A mixture of oxygen and ethyne is burnt for welding ; can you tell why a mixture of ethyne and air is not used? (AS1)
Answer:

Question 7.
Explain with the help of a chemical equation, how an addition reaction is used in vegetable ghee industry. (AS1)
Answer:

Here vegetable oil is a liquid whereas vegetable ghee is a solid (or a semi solid).

Question 8.
a) What are the various possible structural formulae of a compound having molecular formula C3H6O? (AS1)
b) Give the IUPAC names of the above possible compounds and represent them in structures. (AS1)
c) What is the similarity in these compounds? (AS1)
Answer:
a) They are CH3COCH3and CH3 CH2 CHO

Question 10.
What do we call the Self linking property of carbon? (AS1)
Answer:
The property of self combination (or linking) of carbon atoms to form long chains is useful to us because it gives rise to an extremely large number of carbon compounds (or organic compounds). This is known as catenation.

Question 11.
Name the compound formed by heating ethanol at 443 K with excess of cone. H2SO4. (AS1)
(OR)
What is the compound formed when ethyhalcohol (Ethanol) is dehydrated ? Write the chemical equation of the reaction.
Answer:
1. When ethanol is heated with excess of cone. H2SO4 at 443 K (170° C), it gets dehydrated to form ethene (which is an unsaturated hydrocarbon).

2. During dehydration of ethanol molecules (CH3 – CH2OH), H from the CH3 group and OH from CH2OH group are removed in the form of a water molecule (H2O) regulating in the formation of this molecule (CH2 = CH2).
3. In this reaction concentrated sulphuric acid acts as a dehydrating agent.

Question 12.
Give an example for esterification reaction. (AS1)
Answer:
The reaction between carboxylic acid and an alcohol in the presence of cone. H2SO4 to form a sweet odoured substance, ester with the functional group

Question 14.
Write the chemical equation representing the reaction of preparation of ethanol from ethane. (AS1)
Answer:
1. Ethane in the absence of air on heating forms ethene

2. Then Ethanol is prepared on large scale from ethene by the addition of water vapour to it in the presence of catalyst like P2O5, Tungsten oxide at high pressure and temperature.

2. If we observe above series of compounds, we will notice that each compound in the series differs by – CH2 unit by its successive compound.

Question 18.
Why does carbon form compounds mainly by covalent bonding? (AS1)
Answer:
Since carbon atoms can achieve the inert gas electron arrangements only by the sharings of electrons, therefore, carbon always forms covalent bonds.

Question 19.
Allotropy is a property shown by which class substance: elements, compounds or mixtures? Explain allotropy with suitable examples. (AS1)
Answer:

1. Allotropy is a property shown by the elements.

2. The property of an element to exist in two or more physical forms having more or less similar chemical properties but different physical properties is called allotropy.

3. The different forms of the element are called allotropes and are formed due to the difference in the arrangement of atoms.

4. Example for allotropes : Allotropes of carbon.

Allotropes of carbon are classified into two types. They are
1) Amorphous forms,
2) Crystalline forms.

Question 20.
Explain how sodium ethoxide is obtained from ethanol. Give chemical equations. (AS1)
Answer:
As ethanol is similar to water molecule (H2O) with C2H5 group in place of hydrogen, it reacts with metallic sodium to liberate hydrogen and form sodium ethoxide.

Question 22.
Explain the cleansing action of soap. (AS1)
Answer:
When a dirty cloth is put in water containing dissolved soap, the hydrocarbon ends of the soap molecules in the micelle attach to the oil or grease particles present on the surface of dirty clothes.

Question 24.
Explain the structure of graphite in terms of bonding and give one property based on this structure. (AS1)
(OR)
Why does graphite act as lubricant?
Answer:

Question 26.
What happens when a small piece of sodium is dropped into ethanol? (AS2)
Answer:
Ethanol reacts with sodium to liberate hydrogen and form sodium ethoxide.

Question 27.
Two carbon compounds A and B have molecular formula C3H8 and C3H6 respectively. Which one of the two is most likely to show addition? Justify your answer. (AS2)
Answer:

• It is a saturated hydrocarbon. It shows substitution reaction.

• This is an unsaturated hydrocarbon. Hence it shows addition to become saturated. During the reactions, addition of reagent takes place at the double bonded carbon atoms.

Question 28.
Suggest a test to find the hardness of water and explain the procedure. (AS3)
(OR)
How do you test whether a given water sample is soft or hard?
Answer:

Question 29.
Suggest a chemical test to distinguish between ethanol and ethanoic acid and explain the procedure. (AS3)
Answer:

ii) Write your observation regarding the product when the compound X is made to react with compound IT which is used as a preservative for pickles.
Answer:
Ethyl alcohol undergoes oxidation to form the product Acetaldehyde and finally Acetic acid.

Here CH3COOH is used as preservative for pickles.

When X reacts with Y it forms ethyl acetate and water which is called esterification reaction.
CH3COOH + C2H5OH → CH3COOC2H5 + H2O

Question 32.
Collect information about artificial ripening of fruits by ethylene. (AS4)
Answer:

Question 34.
How do you appreciate the role of esters in everyday life? (AS6)
Answer:

Question 35.
How do you condemn the use of alcohol as a social practice? (AS7)
Answer:

b) Write the chemical equation for the above reaction. (AS1)
Answer:

d) How will you test the gas evolved? (AS3)
Answer:
1) Pass the evolved gas through lime water in a test tube.
2) We will find that lime water turns milky.
3) Only CO2 gas can turn lime water milky.

e) List two important uses of the above compound. (AS1)
Answer:
1) Dilute ethanoic acid (CH3COOH) is used as a food preservative in the preparation of pickles and sauces.
2) Ethanoic acid is used for making cellulose acetate which is an important artificial fibre.

Question 37.
1 ml glacial acetic acid and 1 m/of ethanol are mixed together in, a test tube. Few drops of concentrate sulphuric acid is added in the mixture are warmed in a water bath for 5 min.
Answer the following:
a) Name the resultant compound formed.
b) Represent the above change by a chemical equation.
c) What term is given to such a reaction?
d) What are the special characteristics of the compound formed?
Answer:
a) Ethyl acetate.

c) Esterification
d) It has fruity smell or pleasant smell.

Fill In The Blanks

1. Which of the four test tubes containing the following chemicals shows the brisk effervescence when dilute acetic acid was added to them?
i) KOH
ii) NaHCO3
iii) K2CO3
iv) NaCl
A) i & ii
B) ii & iii
C) i & iv
D) ii & iv
Answer:
B) ii & iii

4. Acetic acid, when dissolved in water, it dissociates into ions reversibly because it is a
A) weak acid
B) strong acid
C) weak base
D) strong base
Answer:
A) weak acid

Question 1.
Can carbon get helium configuration by losing four electrons from the outer shell?
Answer:

Question 2.
How do carbon atoms form bonds in so many different ways?
Answer:
As per valence bond theory, the four unpaired electrons in a carbon atom is main cause to form many bonds.

Question 4.
Where does this energy to excite electron come from?
Answer:

Question 5.
In methane (CH4) molecule all four carbon – hydrogen bonds are identical and bond angle HCH is 109°28′. How can we explain this?
Answer:
In excited state, carbon atom has three unpaired electrons in p-orbitals and one electron in s-orbital. These four valence electrons are with different energies. These orbitals combine to form four identical orbitals. Four hydrogen atoms form four identical C -H bonds with bond angle 109° 28′. This is called hybridisation. 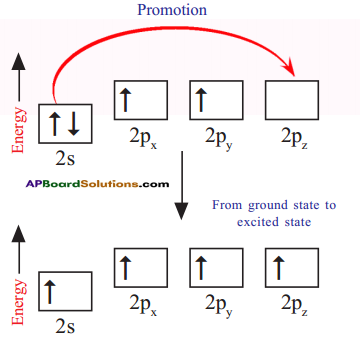 2) The energy difference between the 2s and 2p orbitals is very small. When carbon atom is ready to form bonds it gets a small amount of energy from bond energies and gets excited to promote an electron from the 2s to the empty 2p to give four unpaired electrons.

3) We have got four unpaired electrons ready for bonding, but these electrons are in two different kinds of orbitals and their energies are different.

Question 11.
How do you understand the markings (writings) of a pencil on a paper?
Answer:

Question 12.
Allotting completely one special branch in chemistry to compounds of only one element. Is it justified when there are so many elements and their compounds but not with any special branches?
Answer:

Question 13.
What are hydrocarbons?
Answer:
The compounds containing only carbon and hydrogen in their molecules are called hydrocarbons.

i) How about their structures? Are they same?
Answer:
No, they are not same compounds.

Question 18.
What is the basis for nomenclature?
Answer:
The basic of the nomenclature is number of carbons in the parent chain in a compound.

Suffix :
Suffix is added immediately after the word root. It is two types

1) Primary Suffix :
It is used to indicate the degree of saturation or unsaturation of the main chain.

2) Secondary Suffix :
It is used to indicate the main functional group in the organic compound.

Question 20.
What do you mean by the term ‘alkyl’?
Answer:
Alkyl:
Alkyl is a substituent, that is attached to the molecular fragment.
General formula of alkyl is CnH2n + 1

Question 22.
Why do sometimes cooking vessels get blackened on a gas or kerosene stove?
Answer:
Because of the inlets of air getting closed, the fuel gases do not completely undergo combustion. Hence, it forms a sooty carbon form which gets coated over the vessels.

Question 23.
Do you know what is a catalyst?
Answer:
A catalyst is a substance which regulates the rate of a given reaction without itself finally undergoing any chemical change.

Question 24.
Do you know how the police detect whether suspected drivers have consumed alcohol or not?
Answer:

Question 25.
What are esters?
Answer:

The compounds which contain the functional group and the general formula R – COO – R’, where R and R’ are alkyl groups or phenyl groups, are known as “Esters”.

Question 26.
What is a true solution?
Answer:
A true solution is that in which the solute particles dispersed in the solvent are less than 1 nm in diameter.

Question 27.
What is the action of soap particles on the greasy cloth?
Answer:

Question 28.
Why we are advised not to use animal fats for cooking?
Answer:

Question 29.
Which oil is recommended for cooking? Why?
Answer:
Canola oil :

Question 2.
Read the names of the following hydro carbons and draw their structures in your notebook.
1. 2,2-Dimethyl hexane
Sol.

Question 3.
Write an activity to show esterification reactions.
Answer:
The compound formed is ester. The process is called esterification. 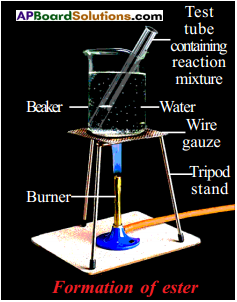