Students get through AP Inter 2nd Year Physics Important Questions 9th Lesson Electromagnetic Induction which are most likely to be asked in the exam.

Question 4.
State Lenz’s law.
Answer:
The direction of induced e.m.f (or) current is such that it opposes the cause which produces it. Lenz’s law is in accordance with law of conservation of energy.

Question 5.
What happens to the mechanical energy (of motion) when a conductor is moved in a uniform magnetic field ?
Answer:
Motional e.m.f is produced to the motion of the conductor in a magnetic field.
Motion e.m.f (ε) B/υ.

Question 6.
What are Eddy currents ? [A.P. Mar. 15]
Answer:
Eddy currents (or) Focault currents : The induced circulating currents produced in a conductor itself due to change in magnetic flux linked with the conductor are called Eddy currents.
Due to Eddy currents, the energy is dissipated in the form of heat energy.

Question 7.
Define ‘inductance’.
Answer:
Inductance is a coefficient of electromagnetic induction and is an intrinsic property of a material just like capacitance.
Inductance is an important scalar quantity which depends upon the geometry (i.e, dimensions) of a coil. 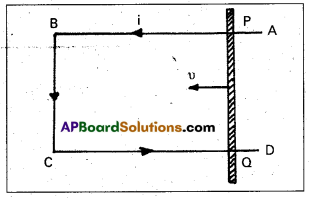 iii) Electromagnetic damping : Certain galvanometers have a fixed core made of non magnetic metallic material. When the coil oscillates, the eddy currents generated in the core oppose the motion and bring the coil to rest quickly.

Question 3.
Obtain an expression for the mutual inductance of two long co-axial solenoids.
Answer:
Consider two solenoids as shown in figure. The length of primary coil be l and area of cross section A. Let N1 and N2 are the total number of turns in the primary and secondary solenoids. Let n1 and n2 be the number of turns per unit length
(n1 = \(\frac{\mathrm{N}_1}{l}\) and n2 = \(\frac{\mathrm{N}_2}{l}\)). Current in the primary coil is i.

b) Replace the galvanometer by a small bulb, the kind one finds in a small torch light. The relative motion between the two coils will cause the bulb to glow and thus demonstrate the presence of an induced current.

Question 4.
The following figure shows planar loops of different shapes moving out of or into a region of a magnetic field which is directed normal to the plane of the loop away from the reader. Determine the direction of induced current in each loop using Lenz’s law. 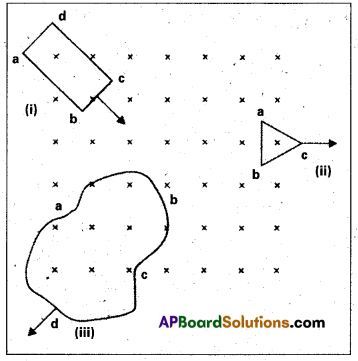 Question 5.
a) A closed loop is held stationary in the magnetic field between the north and south poles of two permanent magnets held fixed. Can we hope to generate current in the loop by using very strong magnets ?
b) A closed loop moves normal to the constant electric field between the plates of a large capacitor. Is a current induced in the loop (i) when it is wholly inside the region between the capacitor plates (ii) When it is partially outside the plates of the capacitor ? The electric field is normal to the plane of the loop.
c) A rectangular loop and a circular loop are moving out of a uniform magnetic field region as in the figure, to a field-free region with a constant velocity v. In which loop do you expect the induced emf to be constant during the passage out of the field region ? The field is normal to the loops.

d) Predict the polarity of the capacitor in the situation described by the following figure.

Solution:
a) No. However strong the magnet may be, current can be induced only by changing the magnetic flux through the loop.

b) No current is induced in either case. Current can not be induced by changing the electric flux.

c) The induced emf is expected to be constant only in the case of the rectangular loop. In the case of circular loop, the rate of change of area of the loop during its passage out of the field region is not constant, hence induced emf will vary accordingly.

d) The polarity of plate ‘A’ will be positive with respect to plate ‘B’ in the capacitor. 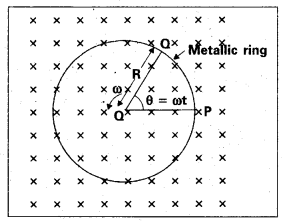 Question 8.
Refer to fig. The arm PQ of the rectangular conductor is moved from x = 0, outwards. The uniform magnetic field is perpendicular to the plane and extends from x = 0 to x = b and is zero for x > b. Only the arm PQ possesses substantial resistance r. Consider the situation when the arm PQ is pulled outwards from x = 0 to x = 2b, and is then moved back to x = 0 with constant speed o. Obtain expressions for the flux, the induced emf, the force necessary to pull the arm and the power dissipated as Joule heat. Sketch the variation of these quantities with distance. 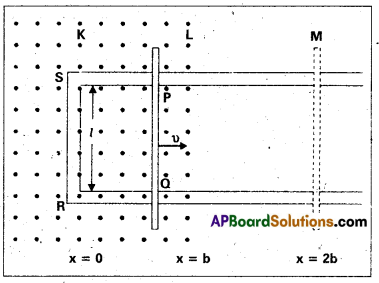 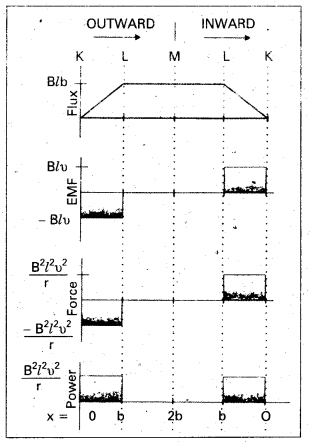