Students get through AP Inter 2nd Year Physics Important Questions 14th Lesson Nuclei which are most likely to be asked in the exam.

Question 2.
Why do all electrons emitted during p-decay not have the same energy?
Answer:
When a neutron is converted into a proton, an electron and neutron are emitted along with it.
\({ }_1^1 \mathrm{n} \longrightarrow{ }_1^1 \mathrm{H}+{ }_{-1}^0 \mathrm{e}+\mathrm{v}\)
In β – decay proton remains in the nucleus, but electron and neutron are emitted with constant energy. The energy of neutron is not constant. So, ail electrons do not have same energy.

Question 12.
What is the function of moderator in a nuclear reactor ?
Answer:
They are used to slow down the fast moving neutrons produced during the fission process.
e.g.: Heavy water, Beryllium.

Question 13.
What is the energy released in the fusion of four protons to form a helium nucleus ?
Answer:
26.7 MeV energy is released.

Question 1.
Write a short note on the discovery of neutron.
Answer:

Question 2.
What are nuclear forces ? Write their properties.
Answer:
The forces which hold the nucleons together in nucleus are called nuclear forces.
Properties of Nuclear forces:

Question 3.
Define half life period and decay constant for a radioactive substance. Deduce the relation between them.
Answer:
Half life period (T) : Time taken for the number of radio active nuclei to disintegrate to half of its original number of nuclei is called Half life period.

Decay constant (λ) : The ratio of the rate of radioactive decay to the number of nuclei present at that instant.
It is a proportional constant and is denoted by ‘λ’.
∴ λ = \(\frac{-\left(\frac{d N}{d t}\right)}{N}\)

Relation between half the period and decay constant:

3. The following graph represents how the binding energy per nucleon varies with the mass number A. 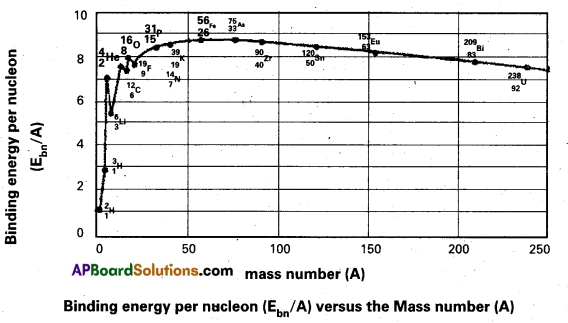 5. With the increase in the mass number the binding energy per nucleon decreases and consequently for the heavy nuclei like Uranium it is 7.6 MeV

6. In the region of smaller mass numbers, the binding energy per nucleon curve shows the characteristic minima and maxima.

Significance:
8. The curve explains the relationship between binding energy per nucleon and stability of the nuclei.

9. Uranium has a relatively low binding energy per nucleon as 7.6 MeV Hence to attain greater stability Uranium breaks up into intermediate mass nuclei resulting in a phenomenon called fission.

10. On the other hand light nuclei such as hydrogen combine to form heavy nucleus to form helium for greater stability, resulting in a phenomenon called fusion.

11. Iron is the most stable having binding energy per nucleon 8.7 MeV, and it neither undergoes fission per fusion.

3. Radioactive decay is exponential in nature : Consider a radioactive substance. Let the number of nuclei present in the sample at t = 0, be N0 and let N be the radioactive nuclei remain at an instant t.
\(\frac{\mathrm{dN}}{\mathrm{dt}}\) ∝ N ⇒ \(\frac{\mathrm{dN}}{\mathrm{dt}}\) = – λN
dN = – λ Ndt …………………….. (1)
The proportionality constant λ is called decay constant or disintegration constant. The negative sign indicates the decrease in the number of nuclei.

7. It states that the number of radioactive nuclei in a radioactive sample decreases exponentially with time.

Question 3.
Explain the principle and working of a nuclear reactor with the help of a labelled diagram. [A.P. & T.S. Mar. 17, A.P. Mar. 16 15, Mar. 14]
Answer:
Principle : A nuclear reactor works on the principle of achieving controlled chain reaction in natural Uranium 238U enriched with 235U, consequently generating large amounts of heat.
A nuclear reactor consists of (1) Fuel (2) Moderator (3) Control rods (4) Radiation shielding (5) Coolant.

2. Moderator : The average energy of neutrons released in fission process is 2 MeV. They are used to slow down the velocity of neutrons. Heavy water or graphite are used as moderating materials in reactor.

3. Control Rods : These are used to control the fission rate in reactor by absorbing the neutrons. Cadmium and boron are used as controlling the neutrons, in the form of rods.

4. Shielding : During fission reaction beta and gamma rays are emitted in addition to neutrons. Suitable shielding such as steel, lead, concrete etc., are provided around the reactor to absorb and reduce the intensity of radiations to such low levels that do not harm the operating personnel.

5. Coolant : The heat generated in fuel elements is removed by using a suitable coolant to flow around them. The coolants used are water at high pressures, molten sodium etc.

Working : Uranium fuel rods are placed in the aluminium cylinders. The graphite moderator is placed in between the fuel cylinders. To control the number of neutrons, a number of control rods of cadnium or beryllium or boron are placed in the holes of graphite block. When a few 235U nuclei undergo fission fast neutrons are liberated. These neutrons pass through the surrounding graphite moderator and loose their energy to become thermal neutrons. These thermal neutrons are captured by 235U. The heat generated here is used for heating suitable coolants which is turn heat water and produce steam. This steam is made to rotate steam turbine and there by drive a generator of production for electric power.

Question 4.
Explain the source of stellar energy. Explain the carbon – nitrogen cycle, proton – proton cycle occuring in stars.
Answer:
Scientists proposed two types of cyclic processes for the sources of energy in the sun and stars. The first is known as carbon-nitrogen cycle and the second is proton-proton cylce.

1. Carbon-Nitrogen Cycle : According to Bethe carbon-nitrogen cycle is mainly responsible for the production of solar energy. This cycle consists of a chain of nuclear reactions in which hydrogen is converted into Helium, with the help of Carbon and Nitrogen as catalysts. The nuclear reactions are as given below. 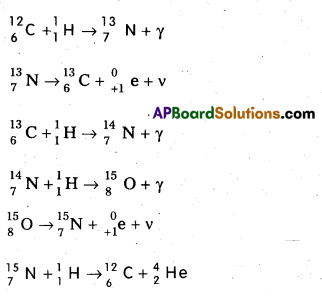 2. Proton – Proton Cycle: A star is formed by the condensation of a large amount of matter at a point in space. Its temperature rises to 2,00,000°C as the matter contracts under the influence of gravitational attraction. At this temperature the thermal energy of the protons is sufficient to form a deuteron and a positron. The deuteron then combines with another proton to form lighter nuclei of helium \({ }_2^3 \mathrm{He}\). Two such helium nuclei combine to form a helium nucleus latex]{ }_2^4 \mathrm{He}[/latex] and two protons releasing a total amount of energy 25.71 MeV The nuclear fusion reactions are given below. 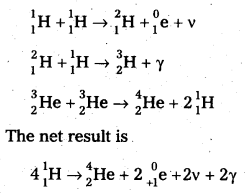