Question 1.
Identify the name of the country in the context of following statement: (UK, USA and France)
1) revolution where parliament system was established
2) country where king continues to play some role even after revolution
3) country that had to war against another in order to establish its democracy
4) The bill of rights was adopted
5) Overthrow of the monarchy was led by the peasants
6) Declaration of Rights of Man and Citizen was adopted
Answer:

Question 2.
What were the main ideas of social thinkers, which were significant to the establishment of new forms of governments? How did they gain popularity?
Answer:

4. Intellectual causes :
The third estate was influenced by the philosophical thoughts of Locke, Rousseau, etc.

Question 6.
Would you agree with the view that the message of Universal Rights was beset with contradictions? Explain.
Answer: 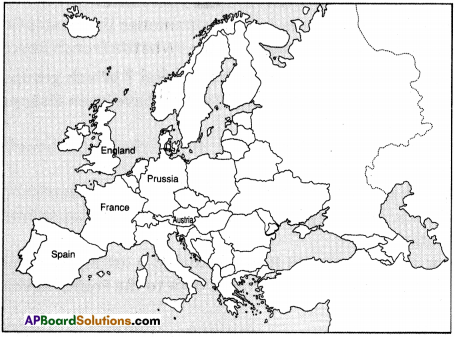 Question 10.
How do you understand women’s role in French Revolution
Answer:
Women’s role in French Revolution : From the very beginning women were active participants in the events which brought about so many important changes in French society. They hoped that their involvement would pressurise the revolutionary govern¬ment to introduce measures to improve their lives. Most women of the Third Estate had to work for a living. They worked as seamstresses or laundresses, sold flowers, fruits and vegetables at the market, or were employed as domestic servants in the houses of prosperous people. Most women did not have access to education or job training.

In order to discuss and voice their interests women started their own political clubs and newspapers. About sixty women’s clubs came up in different French cities. The Society of Revolutionary and Republican Women was the most famous of them. One of their main demands was that women enjoy the same political rights as men. They demanded the right to vote, to be elected to the Assembly and to hold political office.

During the Reign of Terror, the new government issued laws ordering closure of women’s clubs and banning their political activities. Many prominent women were arrested and a number of them executed. It was finally in 1946 that women in France won the right to vote.

Question 11.
Read the paragraph under the title “The Reign of Terror” of page 169 and comment on it.

Answer:
The Reign of Terror:
In the autumn of 1793, Robespierre and the Jacobins focused on addressing economic and political threats within France. What began as a proactive approach to reclaiming the nation quickly turned bloody as the government instituted its infamous campaign against internal opposition known as the reign of terror.

Beginning in September, Robespierre, under the auspicious of the committee of public safety, began pointing an accusing finger at any one whose beliefs seemed to be counter revolutionary – citizens who had committed no crime but merely had social or political agendas that varied too much from Robespierre. The committee targeted even those who shared many Jacobin views but were perceived as just slightly too radical or conservative. A rash of executions ensured in Paris and soon spread to smaller towns and rural areas.

During the nine-month period that followed, anywhere from 15,000 to 50,000 French citizens were beheaded at the guillotine. Even longtime associates of Robespierre such as Georges Danton, who had helped orchestrate the Jacobin rise to power, fell victim to the paranoia. When Danton wavered in his conviction, questioned Robespierre increasingly. The lives were on the edge of a blade.

Question 12.
Learn something more about the different personalities who played an important role in American and French revolution. Which of them impresses you the most and why? Write a paragraph on him/ her.
Answer:

These are all participated and played an important role in French and America revolu-tions. But I like more Marquis de Lafayatte. Why because he participated in American and French Revolutions both.

Marquis de Lafayette :
Lafayate was one of the generals of Louis XVI. Born in a noble family of France, he displayed great qualities of courage and adventure on various occassions. He was also known for his political acumen. He was sent to America during American war of Independence. He helped George Washington in defeating England. While he was in America, he was deeply influenced by the drafting of a constitution and the grant of declaration of rights. On his return from America, he was elected to the estate general and participated in the French Revolution.

Jacques – Pierre Brissot:
A member of the Legislative Assembly and National Conven¬tion who held a moderate stance and believed in the idea of a constitutional monarchy.

Charles de calonne :
The controller general of finance appointed by king Louis XVI after Jacques Necker was forced out of office in 1781.

Lazare carnot :
A French soldier appointed by the committee of public society to help reorganise the failing war effort against Austria and Prussia.

Jacques Necker:
He was appointed as a genera! of finance in the late 1770s.

Maximilien Robespierre :
A brilliant political factician and leader of the radical Jacobins in the National Assembly.

Emmanuel-Joseph Sieyes :
A liberal member of the clergy, supporter of the third estate and author of the fiery 1789 pamphlet “What is the Third Estate”?

Question 1.
What was the effect of the Civil war on the king and the people of the England? (Text Book Page No. 161)
Answer:

Question 2.
(Look at the chart on P.No. 166) Which groups of French society would have gained from the Constitution of 1791? Which groups would have had reason to be dissatisfied? (Text Book Page No. 168)
Answer:

Question 3.
Fill in the blank boxes in the figure below with appropriate terms from among the following: (Text Book Page No. 163)
1) Food riots
2) Social unrest
3) Increase number of death
4) Rising food prices
5) Weaker bodies.
Answer:

Question 4.
Write an imaginary dialogue between persons from a king’s party and parliamentary party in our context. (Text Book Page No. 161)
Answer:
Parliamentary Party :
The parliament had now a better army in so much that if the Earl of Essex had immediately followed the king of Oxford, not yet well fortified, he might in all likelihood have taken it. For he could not want either men or ammunition. Whereof the city of London, which was wholly at the parliments devotion, had store enough.

Kings’ Party :
I cannot judge that. But this is manifest, considering the estate the king was in at his first marching from York, when he had neither money nor men nor arms enough to put them in hope of victory, that this year, take it altogether, was very prosperous.

Question 5.
Imagine the impact of the events of France on neighbouring countries such as Prussia, Austria-Hungary or Spain, all of which were absolute monarchies. How would the kings, traders, peasants, nobles or members of the clergy have reacted to the news of what was happening in France? (Text Book Page No. 168)
Answer: