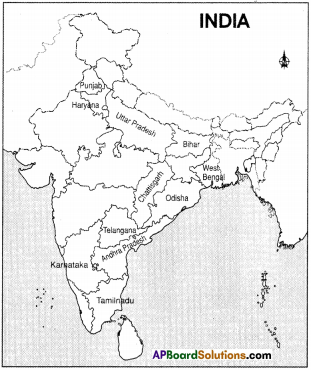 Question 3.
Why is a MSP needed? (SA-II : 2017-18)
Answer:
The government sets the MSP so as to cover the cost of cultivation and allow a little bit of profit to the farmer. 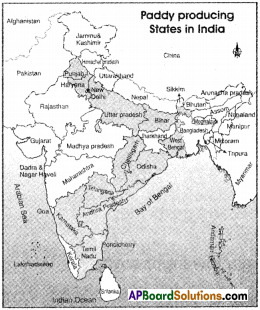 Study the map and answer the following question. (SA-I : 2018-19)
What is major crop in the shaded areas of the map?
Answer:
Paddy. 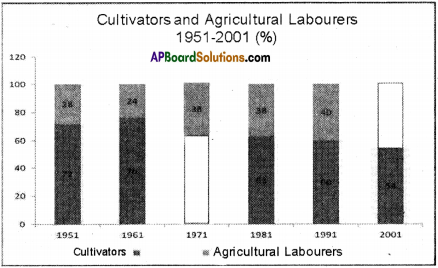 Question 3.
Show the below information on a bar graph and based on this, write your observation. (SA-III : 2016-17) 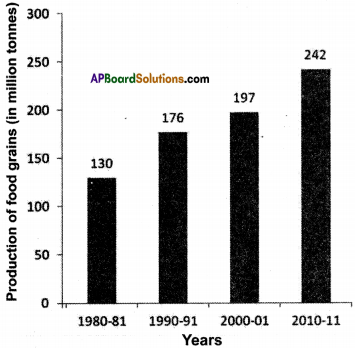 The above graph explains production of food grains is gradually increased from 1980-81 to 2010-11. The main reason is we are following green revolution methods in our agricultural iands.

Question 4.
Today food materials constitute only about three percent of Indian Imports. Explain the role of Green Revolution that lies behind this achievement. (SA-III : 2016-17)
Answer:
The production of food grains has increased five times over last five decades from 51 to 242 million tonnes.

The green revolution helped farmers to produce higher level of foodgrains and non- foodgrains on the same plot of land they had. There was no major increase in the land used for cultivation. 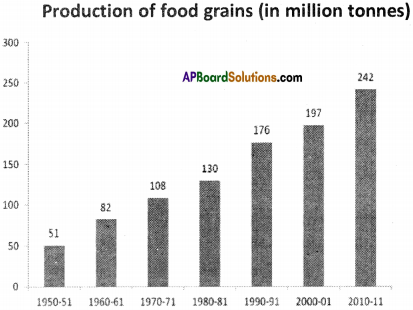 Observe the above graph and answer the following questions.
1. What does the graph given above denotes? (SA-III : 2015-16)
Answer:
The above graph explains the production of foodgrains from 1950-51 to 2010-11 years.

4. What are the reasons for the increase in production of food grains? (SA-III : 2015-16)
Answer:
The main reason is use of Green Revolution methods.

Question 3.
“Conserving rainfall that the area receives is the first step. There are several ways that people can stop rainwater from quickly running off so that it can soak into the ground, and recharge the groundwater”.
Q : Comment on watershed development programms being implemented in dry land area. (SA-II : 2016-17)
Answer:
Unlike the cultivation of HYVs in irrigated lands, dryland farming possess different challenges.

This is done through Watershed Development Programmes which include afforestation, bunding, building check dams and tanks.

Not send any chemical waste into underground.

Try to reduce the wastage of daily use water.

Create awareness among the all people about the importance of underground water and its recharge. 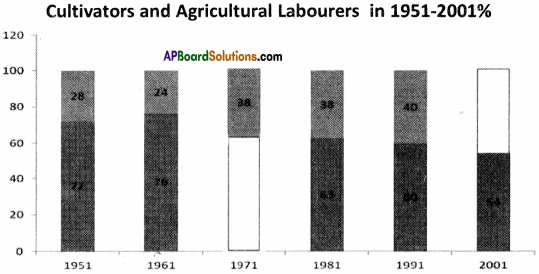 Agricultural labourers :
Agriculture labourers are those who are landless labourers who work on other lands.

3. Green Manure :
Farmers should be educated for firing green manure. Oil cakes may be used as fertilizers.

6. Time to time weather reports telecast by govt through media.

1. Who are considered as large farmers as per the above table?
2. Which type of farmers are high in number?
3. How many total acres of land do the farmers cultivate in India?
4. How much of land on an average does each marginal farmer cultivate?
Answer:

Question 1.
Name one staple crop of India and the regions where it is produced.
Answer:
Rice:

Question 3.
Name some important crops of India, states which produce them and reasons both and natural and other factors contributed to their growth.
Answer: 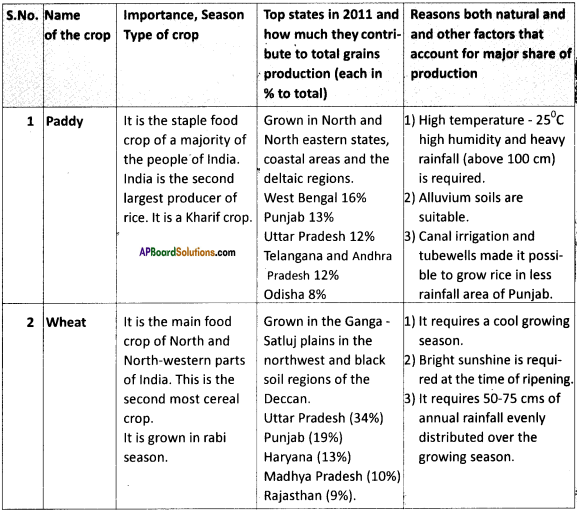 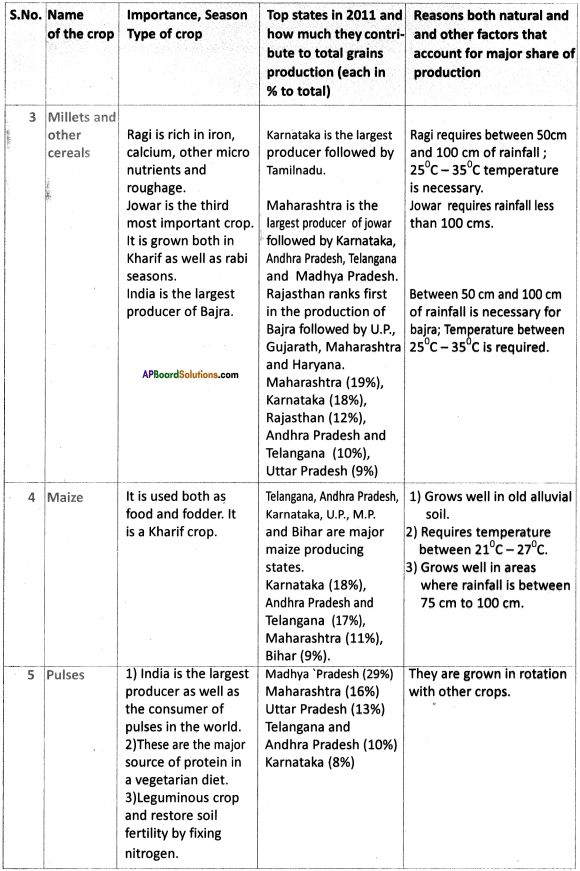 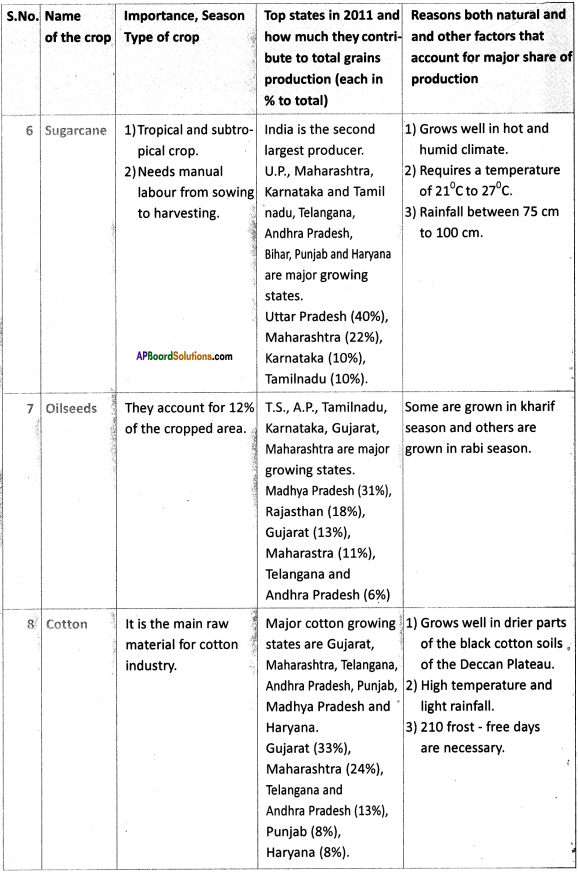 Question 4.
What is the fertility of the soil?
Answer:

Question 5.
How is organic farming different from traditional farming?
Answer:

Question 6.
Why is agriculture important to Indian economy?
Answer:

Question 9.
How many varieties of crops are grown in India? What are they?
Answer:
A variety of crops are cultivated by farmers in India. They are broadly categorised into two :

Question 10.
Give examples of food grains and non-food grains.
Answer:

Question 12.
Name some of the states of India where “slash and burning” farming is practised.
Answer:
Punjab, Haryana, Odisha, Karnataka, Telangana, Andhra Pradesh, Madhya Pradesh, Uttar Pradesh, and some parts of Rajasthan.

Question 13.
What is the fertility of the soil?
Answer:

Question 17.
What do you know about Zaid cropping season?
Answer:

Question 18.
Read the following and answer the questions given below.

2. How can the farmers be protected from the low prices of grains?
Answer:
The government protects the farmers by setting a Minimum Support Price (MSP).

3. What is Minimum Support Price?
Answer:
The MSP is a price at which the farmers can sell their grain, if they want, to the government.

4. How does the MSP protect the farmer?
Answer:
The government sets the MSP so as to cover the cost of cultivation and allow a little bit of profit to the farmer.

Question 19.
Observe the following information and answer the questions given below.

3. When do we have Rabi season?
Answer:
Rabi crops are sown in winter from October to December and harvested in summer.

A) Percentage of different category of farmers :
1. How much percentage of Marginal farmers are there.
Answer:
67 %

2. How much percentage of small farmers are there?
Answwr:
18 %

3. How much percentage of large farmers are there?
Answer:
0.7 %

Question 21.
What are the long run uses of chemical fertilizers and pesticides?
Answer:

Question 22.
In which areas were the new methods of agriculture first tried?
Answer:
The new methods were initially implemented in Punjab, Haryana, western Uttar Pradesh, and in some districts of Telangana, Andhra Pradesh, and Tamilnadu.

Question 29.
How can you say that now India is practising subsistence farming?
Answer: 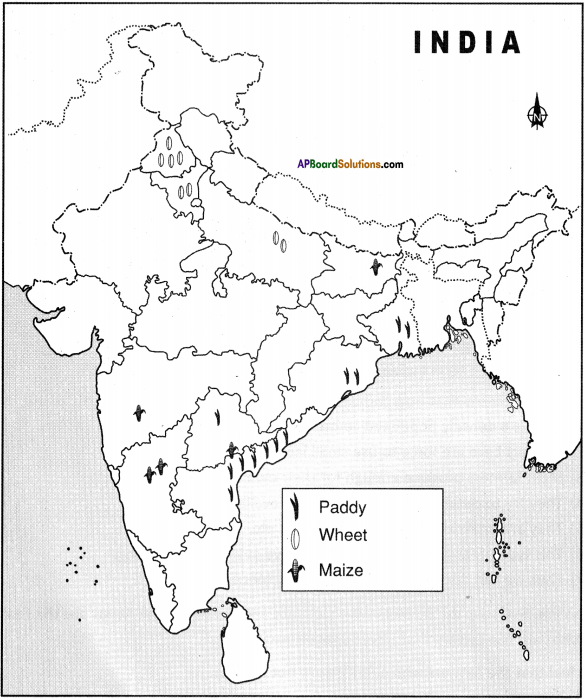 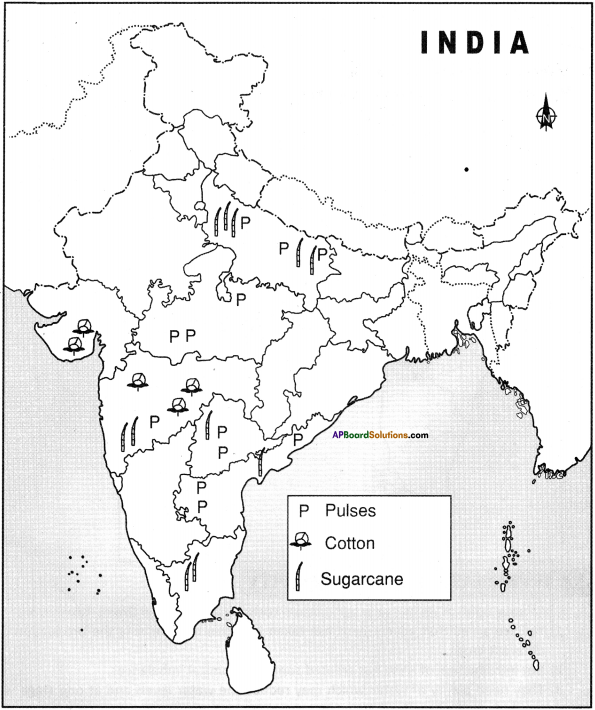 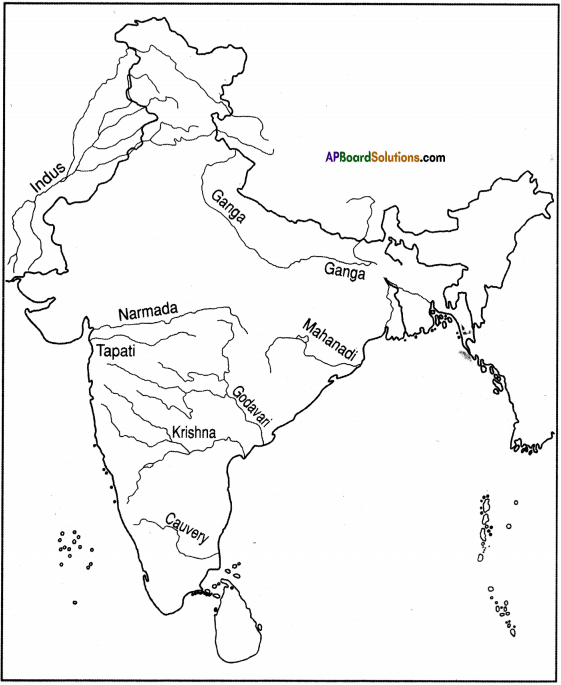 Question 33.
State your opinion on the new agricultural technologies such as Green Revolution.
Answer:

Question 35.
How did the partition of the country in 1947 affect the Jute industry?
Answer:
We have lost the major jute growing areas during partition. Hence the jute industry was badly affected.

Question 36.
What measures would you suggest to protect agriculture from intense commercial farming?
Answer:

Question 37.
What measures would you suggest for the cultivation of cotton crop?
Answer: