Question 1.
Define Renaissance. (SA-II : 2016-17)
Answer:
Renaissance means “Re birth”. It was a period in Europe, especially Italy when there was a new interest in art, literature, science and learning flourished.
(OR)
Renaissance means the cultural changes in Europe. 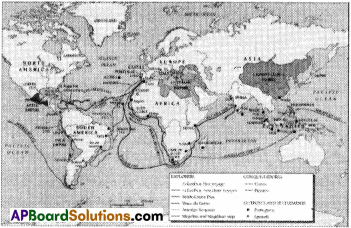 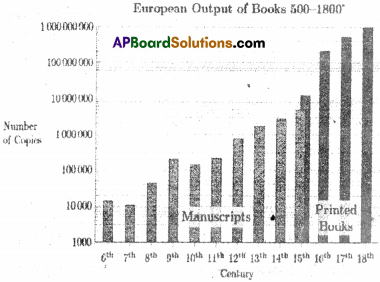 i) What trend does the bar graph show?
Answer:
The bargraph shows the European output of Books 500 -1800. It shows that Manuscript books were avilable from 6th century to 15th century and printed books were started from 15th century.

ii) What could be the possible reason for this trends?
Answer:
Invention of printing press.

In earlier times, women were exploited through every possible means by the society. But at present women become self reliant. Along with the men, women also participated equally in education, medicine, space, agriculture fields, etc.

Not only this, women also participated in politics along with men. Some times they occupies heighest posts in India.

In some sectors, compared to men, women only are in forward position.

But still, in some areas, women were dominated by men and it shows our society is a male dominated society.

Based on the information given above and answer the following questions,
1. Who gave more importance to the future life than the present life?
2. In which theory can we notice the weakening of the control of religion over human life?
3. The famous statue that depicts Mary holding the body of Zesus reflects which theory?
4. Which theory opposed the glorification of science? (SA-III : 2016-17)
Answer:

Question 4.
The Italian Renaissance was a rebirth of learning that produced many great works of art and literature. (SA-I : 2019-20)
In the context of the above statement, describe how renaissance revolutionized the art and artistic styles?
Answer:

linear perspective, foreshortening and the naturalistic realism of its faces.

Question 1.
Do you think it is important for artists to paint things as they are, that is realistically? Give reasons.
Answer:

Question 2.
Why do you think the Popes and bishops encourage the new art?
Answer:

Question 3.
What efforts did the artists make to achieve realism in their painting and sculpture?
Answer:

Question 4.
Do you think religious texts should only be in the language understood by the common people? Give your arguments.
Answer:

2) Which island did Columbus want to discover?
Answer:
He wanted to discover East Indies.

4) To which country did Amerigo Vespucci belong?
Answer:
He belonged to Italy.

5) Which book of Newton was mentioned in this timeline?
Answer:
Principia Mathematica.

Question 7.
Discuss in the class the kind of changes that are happening today in some of these aspects like films, buildings, religious beliefs, music, etc. What are the changes that you observe around you? What is causing these changes?
Answer:

Question 8.
Have you seen people from distant places live in places near you? In what ways do you think they help in the spread of ideas from one place to another? Give examples while discussing.
Answer: 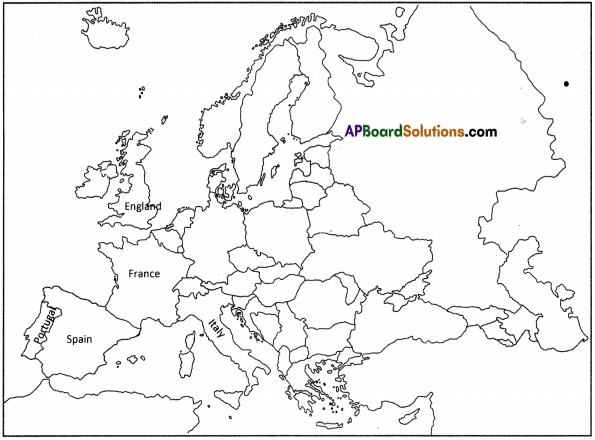 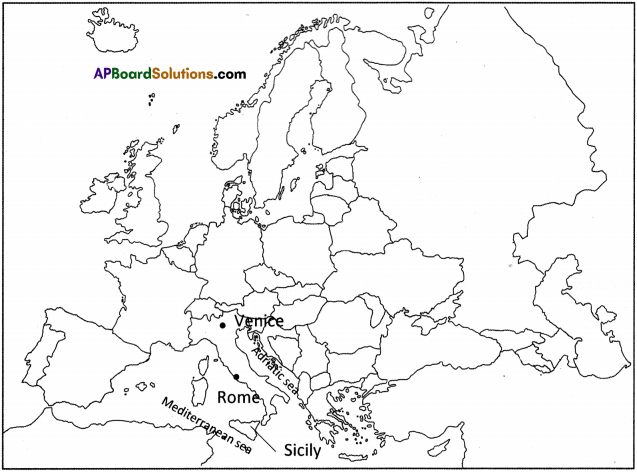 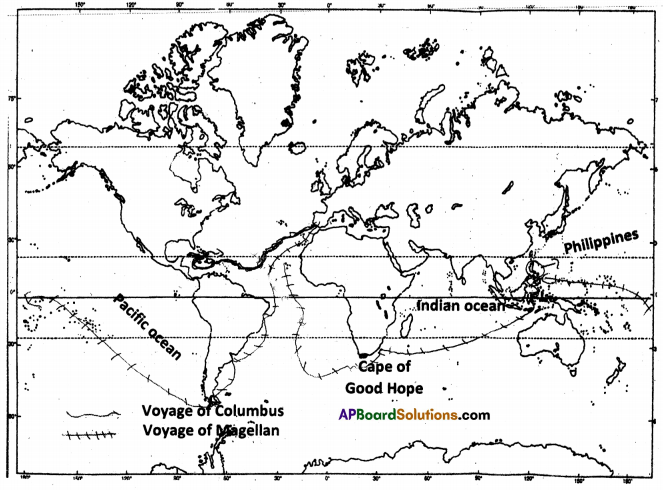 Question 12.
What role did scientists and sailors play in modernizing our world?
Answer:

Question 13.
Have you seen any painting by any famous artist? If so talk about it to your classmates. Was it realistic? What impression did it make upon your mind?
Answer: