Question 1.
Explain the reasons for the following. (AS 1)
a) When a carpet is beaten with a stick, dust comes out of it.
Answer:

b) Luggage kept on the roof of a bus is tied with a rope.
Answer:

c) A pace bowler in cricket runs in from a long distance before he bowls.
Answer:

Question 3.
Keep a small rectangular shaped piece of paper on the edge of a table and place an old five rupee coin on its surface vertically as shown in the figure below. Now give a quick push to the paper with your finger. How do you explain inertia with this experiment? 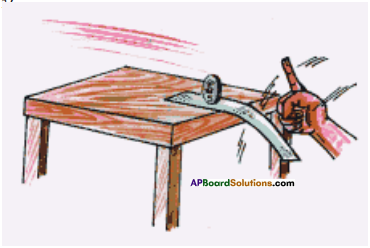 Question 4.
If a car is travelling westwards with a.constant speed of 20 m/s, what is the resultant force acting on it? (AS 1, AS 7)
Answer:

Question 8.
A force acts for 0.2 sec on an object having mass 1.4 kg initially at rest. The force stops to act but the object moves through 4 m in the next 2 seconds, find the magnitude of the force. (AS 1)
Answer:

Question 10.
Find the acceleration of body of mass 2 kg from the figures shown. (AS 1) 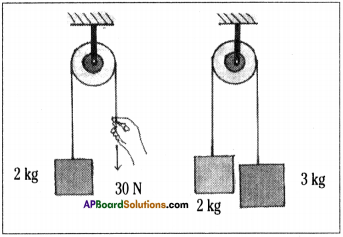 Question 16.
Two rubber bands stretched to the standard length cause an object to accelerate at 2 m/sec². Suppose another object with twice the mass is pulled by four rubber bands stretched to the standard length. What is the acceleration of the second object? (AS 1)
Answer:
First object:
Let the force applied by two rubber bands = F1 Newton
Mass of the object = m1 kg; Acceleration a1 = 2 m/sec²
We know F = ma
F1 = m1 × 2
⇒ F1 = 2m1 …….(1)

Question 17.
Illustrate an example of each of the three laws of motion. (AS 1)
Answer:
First law of motion :
A body continues its state of rest or of uniform motion unless a net force acts on it.
Ex:

Second law of motion :
The rate of change of momentum of a body is directly proportional to the net force acting on it and it takes place in the direction of net force.
Ex : Place a ball on the veranda and push it gently. Then the ball accelerates from rest. Thus, we can say that force is an action which produces acceleration. 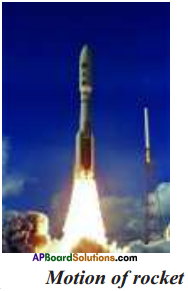 ∴ Velocity of second skater is 3 m/s, but in the direction opposite to the first skater.

Question 19.
A passenger in moving train tosses a coin which falls behind him. It means that the motion of the train is (AS 7)
a) Accelerated
b) Uniform
c) Retarded
d) Circular motion
Answer:
a) Accelerated

Question 20.
A horse continues to apply a force in order to move a cart with a constant speed. Explain. (AS 1)
Answer: 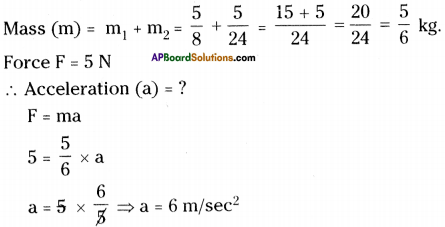 Question 23.
System is shown in figure. Assume there is no friction. Find the acceleration of the liloc-ks-and tension in the string. Take g = 10 m/s² (AS 1) 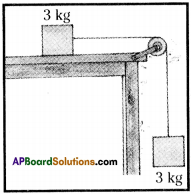 Question 24.
Three identical blocks, each of mass 10 kg, are pulled as shown on the hoii ;ontal frictionless surface. If the tension (F) in the rope is 30 N, what is the acceleration oi each block? And what are the tensions in the other ropes? (Neglect the masses of the ropes) (AS 1)

Question 25.
A ball of mass’m’ moves perpendicularly to a wall with a speed v, strikes it and rebounds with the same speed in the opposite direction. What is the direction and magnitude of the average force acting on the ball due to the wall? (AS 7)
Answer:
According to the Newton s third law of motion,
Force exerted by ball on the wall = – (Force exerts by the wall on the ball)
∴ FB.W = – FW.B
Force exerted by ball :
Mass of ball = m, speed = v, FBW = ma = \(\frac{\mathrm{m} \cdot \mathrm{v}}{\mathrm{t}}\)
As the wall is at rest and exerts some force on the ball of mass m, then it moves in the other direction with the same speed.

Question 26.
Divya observed a horse pulling a cart. She thought that cart also pulls the horse with same force in opposite direction. As per third law of motion, the cart should not move forward. But her observation of moving cart raised some questions in her mind. Can you guess what questions are raised in her mind? (AS 2)
Answer:

Question 27.
How do you appreciate Galileo’s thought of “any moving body continues in the stale only until some external force acts on it”, which is contradiction to the Aristotle’s belief of “any moving body naturally comes to rest”? (AS 6)
Answer:

Question 1.
Do all the bodies have the same inertia?
Answer:
The inertia of all bodies is not same. It depends on the mass of the object.

Question 8.
Why does a pole vault jumper land on thick mats of foam?
Answer:
A thick mat of foam reduces the force of impact of the jumper, so that he doesn’t have any damage to his body.

Question 9.
Is it safe to jump on sand rather than a cement floor? Why?
Answer:

Question 10.
You may have seen the trick where a tablecloth is jerked from a table, leaving the dishes that were on the cloth nearly in their original positions.
a) What do you need to perform this successfully?
Answer:
We need a table, a cloth and some massive objects to perform this activity. The performer drag the cloth from the table very skillfully.

b) Which cloth should we use? Is it cloth made of thick cotton or thin silk?
Answer:
We have to use a thin silk cloth to perform this activity.

d) Is it better to pull the cloth with a large force or pull it with a gentle and steady force?
Answer:
The cloth must be pulled with a gentle force, but with a sudden jerk. 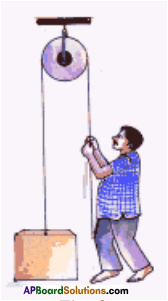 Question 15.
Prove that the tension throughout the string is uniform when the mass of string is considered to be zero.
Answer:

Let a body of mass m is suspended through a string. The weight of the object mg acts downwards. Now tension in the string T = mg + msg when ms is the mass of the string.
Here ms is considered as zero.
Hence TA= mg + 0 = mg; TB = mg ; TC = mg ; TD = mg
∴ The tension throughout the string is uniform when the mass of string is considered to be zero.

Question 16.
The force exerted by the earth on the ball is 8 N. What is the force on the earth by the ball?
Answer:

“According to Newton’s third law, if a body A exerted a force p on another body B, the B exerts a force -p on A, the two forces acting along the same line”.

Question 17.
A block is placed on the horizontal surface. There are two forces acting on the block. One, the downward pull of gravity and other a normal force acting on it. Are these forces equal and opposite? Do they form action – reaction pair? Discuss with your friends.
Answer:
These two forces form action-reaction pair.

Question 18.
Why is it difficult for a fire fighter to hold a hose that ejects large amount of water at high speed?
Answer:
A large amount of water with high speed ejects from the hose of a fire engine, produces a large force in forward direction. According to action-reaction, the hose moves back with the same force. But the fire fighter has to resist that reaction force. Hence it becomes very difficult for him.

Question 20.
As you throw a heavy ball upward, is there any change in the normal force on your feet?
Answer:
The normal force on the feet changes its direction and acts in upward direction. As a result we raise our foot while throwing the ball.

Question 21.
When a coconut falls from a tree and strikes the ground without bouncing. What happens to its momentum?
Answer:
Its momentum doesn’t change but its impact force will be very less because it is not bouncing.

Question 22.
Air bags are used in’the cars for safety. Why?
Answer:
When a car hits another vehicle, the air bags immediately comes in between the persons in the car and the wind shield of the car, to prevent damage to life of passengers.

Question 1.
Explain the motion of a pen cap kept on a thick paper ring.
Answer: 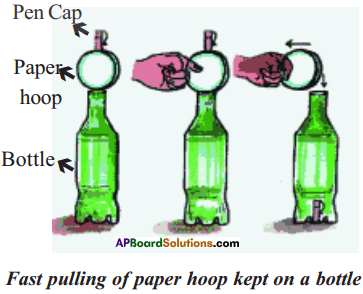 Question 2.
Explain the motion of the carrom coins hit by a striker.
Answer: 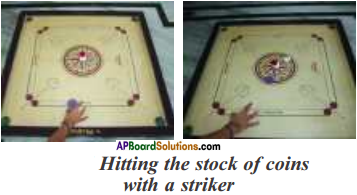 Question 3.
Show that the object with larger mass has greater inertia.
Answer: 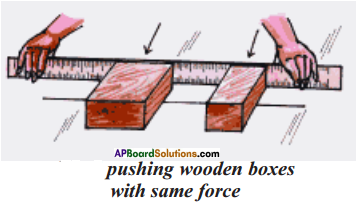 Question 4.
Show that the larger the net force greater the acceleration.
Answer: 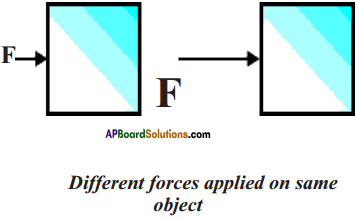 Conclusion : If the net force is larger, then the accelerations greater.

Question 5.
Show that the larger the mass smaller the acceleration.
Answer: 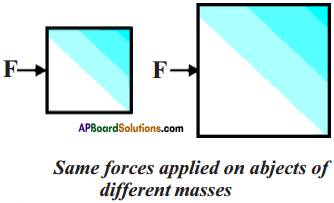 Conclusion : If the mass is larger, then the acceleration is smaller.

Observation :
There is no change in the reading of spring balances. We are not able to make the spring balances to show different readings by pulling them simultaneously in opposite directions.

The two opposing forces are known as action and reaction pair. Newton’s third law explains what happens when one object exerts a force on another object.

Question 7.
Describe the preparation of a balloon rocket. What is the principle involved in it?
Answer: 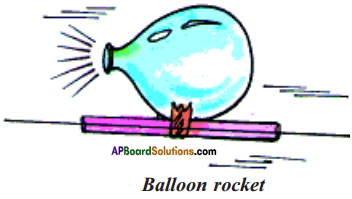 Preparation of a balloon rocket :

Principle involved in it: 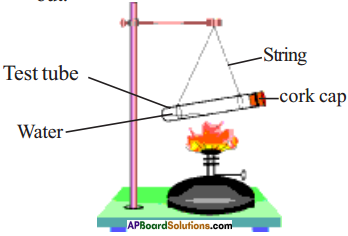 Question 9.
Show that the impulse will be less on a soft and cushioned surface.
Answer: 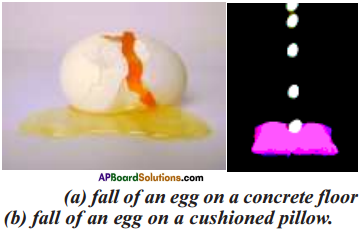 Note : Even if the ∆p is the same in both cases, the magnitude of the net force (Fnet</sub) acting on the egg determines whether the egg will break or not.