Question 1.
As shown in following figure, a point traverses the curved path.
Draw the displacement vector from given points A to B.

Question 2.
“She moves at a constant speed in a constant direction.” Rephrase the same sentence in fewer words using concepts related to motion. (AS 1)
Answer:
“She moves with constant velocity”.

Reason :
Constant speed in a constant direction is nothing but ‘constant velocity’.

Question 5.
Suppose that the three balls shown in figure below start simultaneously from the top of the hills. Which one reaches the bottom first? Explain.

Question 6.
In the figure given below distance vs time graphs showing motion of two cars A and B are given. Which car moves fast? (AS 1) 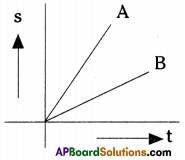 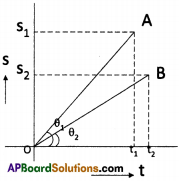 Question 7.
Draw the distance vs time graph when the speed of a body increases uniformly. (AS 5)
Answer:
Let us consider a car moves as shown in the table. 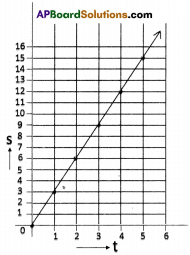 Question 8.
Draw the distance-time graph when its speed decreases uniformly. (AS 5)
Answer:
Let us consider the movement of a car after applying brakes. 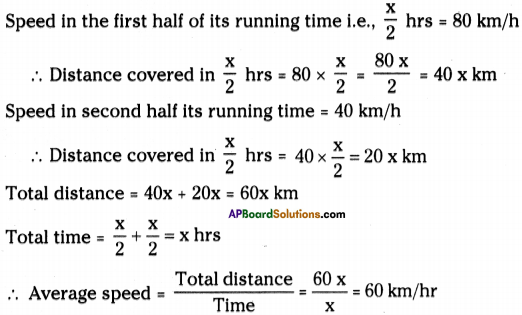 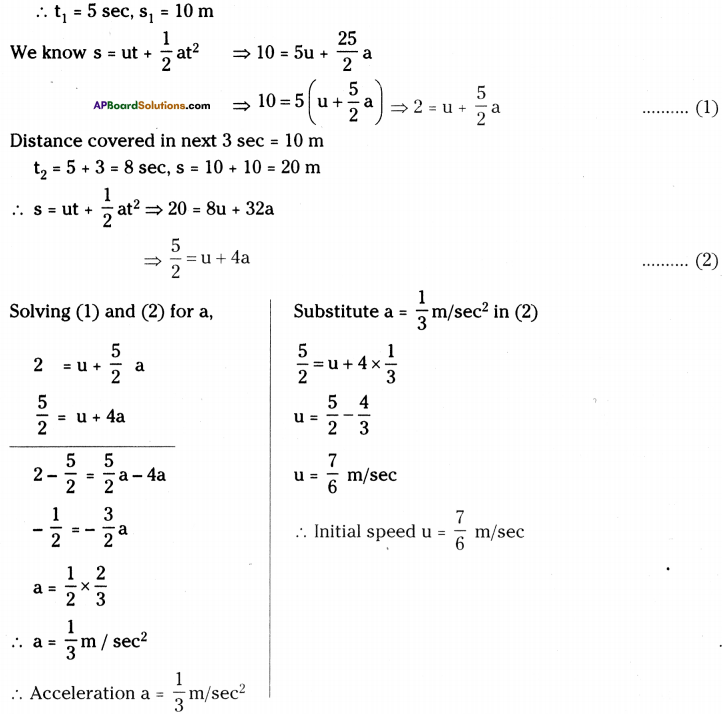 To find the distance covered in next 2 sec, we have to find the initial speed after 8 sec
i.e., the final velocity after 8 sec. 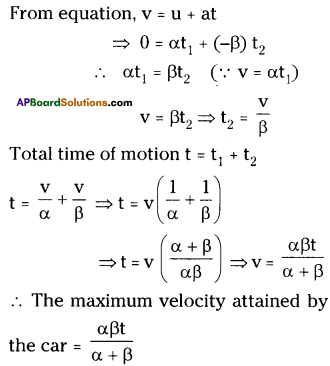 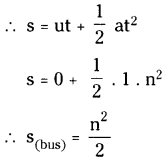 A man running with uniform velocity, v = 10 m/sec.
Distance covered by man in n seconds = 10 nm.
But after ‘n’ seconds the man catches the bus. 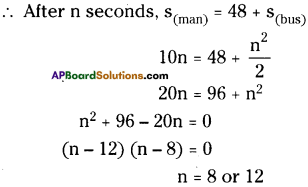 ∴ The minimum time in which the man catches the bus is 8 sec.

Question 17.
What do you mean by constant acceleration? ((AS 1)
Answer: 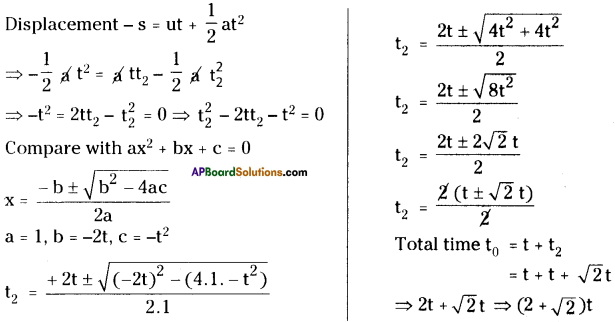 Question 22.
You may have heard the story of the race between the rabbit and tortoise. They started from same point simultaneously with constant speeds. During the journey, rabbit took rest somewhere along the way for a while. But the tortoise moved steadily with lesser speed and reached the finishing point before rabbit. Rabbit woke up and ran, but rabbit realized that the tortoise had won the race. Draw distance vs time graph for this story. (AS 5)
Answer: 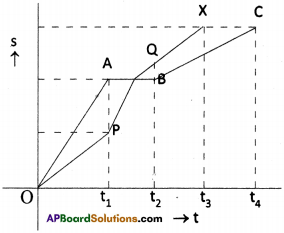 Question 24.
Two trains each of having a speed of 30 km/h are headed at each other in opposite direction on the same track. A bird flies off one train to another with a constant speed of 60 km/h when they are 60 km apart till before they crash. Find the distance covered by the bird and how many trips the bird can make from one train to the other before they crash. (AS 1)
Answer:
Speed of each train = 30 km/hr
Speed of the bird = 60 km/hr
Distance between the two trains = 60 km
These two trains crash in one hour.
The bird flies a distance of 60 km till before the two trains crash.
The bird can make number of trips (infinity) before they crash.

Question 3.
Have you ever experienced that the train in which you sit appears to move when it is at rest? Why?
Answer:
This happens when we sit in a stationary train and, the train on another track starts moving.

Question 4.
Why do we observe these changes? 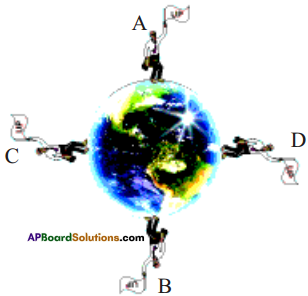 Answer:
These changes are due to the point of observation. We know that earth is a sphere, the upward direction of the vertical position on its surface decisively depends upon the place on the earth’s surface, where the vertical is drawn.

Question 5.
Are the terms relative or not?
Answer:
The terms “longer”, “shorter”; “up” and “down”, etc. are relative to each other.

Question 7.
How do we understand motion?
Answer:
A body is said to be in motion when its position is changing continuously with time relative to an observer.

Question 9.
How can you differentiate speed and average velocity?
Answer:

Question 11.
What is the speed of the car at the instant of time ‘t3‘ for given motion?
Answer: 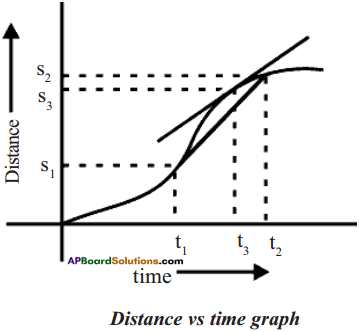 Question 13.
Which motion is called uniform? Why?
Answer:
The motion of the body is said to be in uniform when its velocity is constant.

Question 14.
What is the shape of the graph?
Answer: 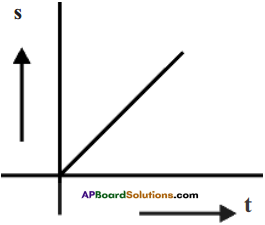 The shape of the graph for a body which is in uniform motion is a straight line as shown in the figure.

Question 15.
a) What is the shape of the graph?
Answer:
It is a curve. 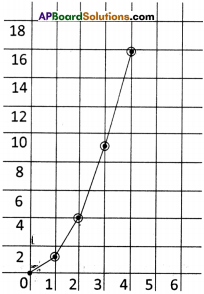 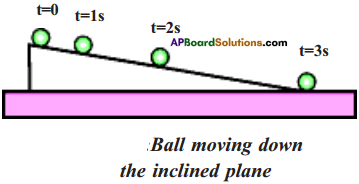 From the graph, we conclude that when the ball moves down the inclined plane its speed increases gradually but its direction remains constant. 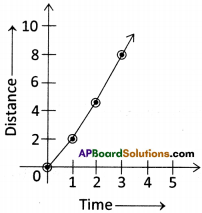 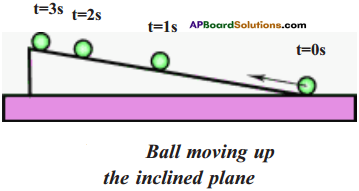 From the graph, we conclude that when the ball moves up the inclined plane its speed decreases gradually, but the direction of motion remains constant. 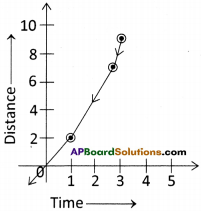 Question 20.
Can you give some more examples where speed and direction simultaneously change?
Answer:
Motion of a rocket, horizontally projected body, kicked football, a cricket ball bowled by a bowler, etc.

Question 22.
At which point is the speed maximum?
Answer:
At B, the speed will be maximum.

Question 29.
Very often you must have seen traffic police stopping motorists or scooter drivers who drive fast and fine them. Does fine for speeding depend on average speed or instantaneous speed? Explain.
Answer:
Instantaneous speed.

Question 31.
The speedometer of the car indicates a constant reading. Is the car in uniform motion? Explain.
Answer:
Yes.

Question 33.
Give an example of motion where there is a change only in speed but no change in direction of motion.
Answer:
Motion of a bus on the road. 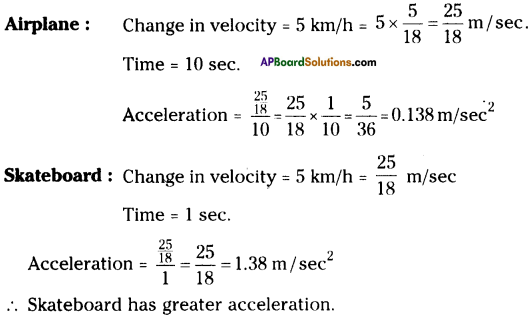 Question 36.
What is the deceleration of a vehicle moving in a straight line that changes its velocity from 100 km/h to a dead stop in 10 sec?
Answer:

Question 1.
Draw a graph showing the difference between distance and displacement.
Answer: 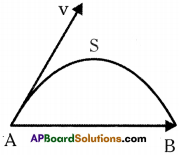 Displacement:
Displacement is the shortest distance between initial and final points in a specified direction represented by a vector.

Distance :
Distance is the length of the path traversed by an object in a given time interval.

Question 2.
Draw displacement vectors from A to B in the following situations. 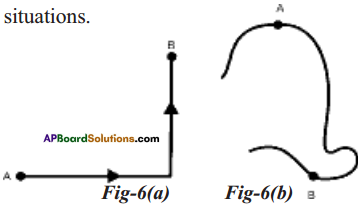 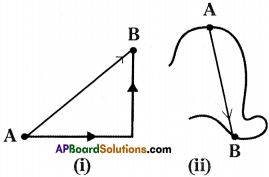 Question 3.
How can the average speed be measured?
Answer:

Activity – 4 Observing the direction of motion of a body

Question 4.
Show that the direction of velocity is tangent to the path at a point of interest when a body is in uniform circular motion.
Answer:

Question 5.
Describe uniform motion.
Answer:
1) Consider a cyclist moving on a straight road.
2) The distance covered by him with respect to time is given in the following table.

3) Draw distance vs time graph for the given values in the table. 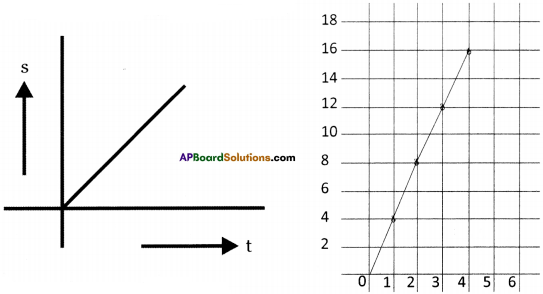 6) We observe that the ball moves upward to a certain distance and comes back to the bottom.
7) From this we conclude that the speed changes but the direction of motion remains constant.

Question 7.
Explain with an example where “speed remains constant, but its velocity changes”.
Answer: 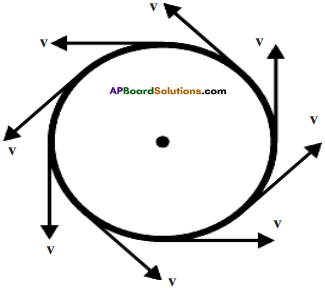 Activity – 8 Observing the motion of an object thrown into air

Question 8.
Explain an activity to observe where speed and direction of motion change continuously.
Answer: 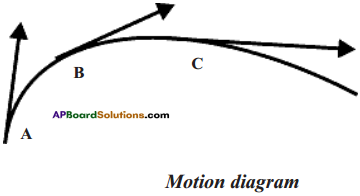