Question 1.
There is a mixture with sand and iron filings. Write an activity for the separation of iron filings from sand.
Answer:

Question 2.
How can you use milk to show Tyndall effect?
Answer:

Question 1.
Draw the arrangement of apparatus of fractional distillation experiment. What is the advantage of using the fractionating column?
Answer: 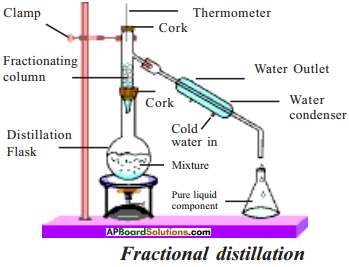 Question 2.
Draw and label the apparatus set up for the separation of a mixture by sublimation.
Answer: 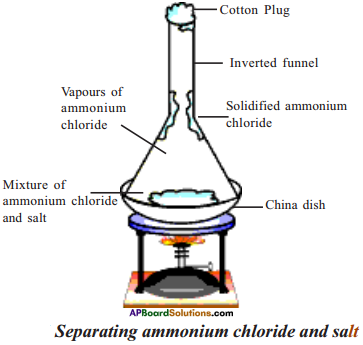 Question 3.
Draw and label the apparatus set up for the separation of a mixture by evaporation.
Answer: 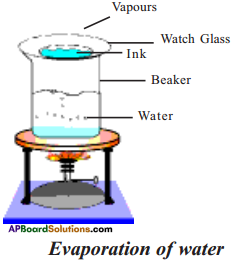 Question 4.
Explain how two miscible liquids can be separated if their boiling points are close to each other.
Answer:

To separate two or more miscible liquids when the difference in their boiling points is less than 25°C, fractional distillation process is used.

Question 5.
800 ml of solution contains 20 grams of solute. Calculate the concentration in terms of mass by volume percentage of the solution.
Answer:

Question 6.
a) Diagram shows one of the process of separation by mixtures. Based on the diagram answer the following questions.
i) Identify the process involved in the diagram.
Answer:
Sublimation.

ii) Is something missing in the diagram. If so what is that?
Answer:
Stove is missed for heating.

iv) Give one more example for separation of mixture using above process? 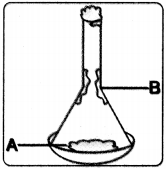 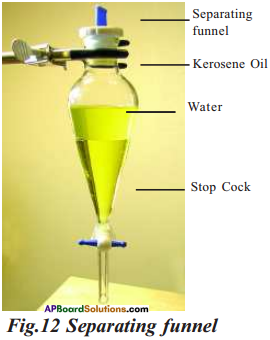 Question 1.
What is meant by ‘Pure substance’?
Answer:
In our day to day language, ‘pure’ means something with no adulteration. A substance is said to be pure i.e., homogeneous when the composition doesn’t change, no matter which part of the substance you take for examination.

Question 2.
What is a mixture?
Answer:
A mixture is generally made of two or more components that are not chemically combined.

Question 6.
When do you say that a solution is dilute solution?
Answer:
If the amount of solute present is little, the solution is said to be dilute.

Question 8.
Define suspension.
Suspensions are the heterogeneous mixtures of a solid and a liquid in which the solids do not dissolve, like mixtures of soil and water.
Ex : Mixture of sand and water.

Question 9.
Define emulsion and give an example.
Answer:
Emulsion is a mixture consisting of two liquids that do not mix and settle into layers when they left undisturbed.
Ex : Mixture of oil and water.

Question 10.
What is a colloid?
Answer:
Colloids are heterogeneous mixtures in which the particle size is too small to be seen with the naked eye, but big enough to scatter light.
Ex : Milk, Cheese, Ghee, etc.

Question 12.
What technique do you use to separate the colours?
Answer:
The laboratory technique called chromatography is used for the separation of mixtures into its individual components like inks and dyes.

Question 14.
What is the definition given by Lavoisier for the ‘element’?
Answer:
According to Lavoisier, an element is a form of matter that cannot be broken down by chemical reactions into simpler substances.

Question 1.
What is a centrifuge? What are its uses?
Answer:
Centrifuge is a machine used to separate the particles of higher mass and lower mass from a mixture.
Uses :

Question 2.
Define a mixture and mention its properties.
Answer:
Mixture :
A mixture is generally made of two or more components that are not chemically combined.

Question 4.
Define solution, solvent and solute.
Answer:
Solution :
The homogeneous mixture of two or more substances is that we cannot separate them by the process of filtration called a solution.

Solvent:
The component of the solution that dissolve the other component in it (usually the component present in larger quantity) is called solvent.

Solute :
The component of the solution that is dissolved in the solvent (usually the component present in lesser quantity) is called solute.

Question 5.
Mention the properties of a solution.
Answer:

Question 7.
Define miscible and immiscible liquids.
Answer:
Miscible liquid :
A liquid is said to be miscible if it dissolve completely in another liquid.
Ex : Alcohol is miscible in water.

Question 8.
Define element and compound. Give examples.
Answer:
Element:
Element can be defined as a basic form of matter that cannot be broken down into simpler substances by chemical reactions.
Ex : lron, gold, silver, sodium, magnesium, etc.

Compound :
Compound can be defined as pure substance that can be separated into two or more components by means of chemical reactions.
Ex : Copper sulphate, ammonium chloride, etc.

Question 9.
How do you appreciate the efforts of scientists in discovering elements?
Answer:

Question 11.
What are the factors on which solubility depends on?
Answer:
The factor influence solubility are

If the amount of solute is more in a solution, then the solution is called concentrated solution.

Question 13.
How do you separate following mixture?
a) Iodine from sodium chloride
b) Petrol from water
c) Butter from milk
d) Sugar from water
Answer:
a) Sublimation
b) Separating funnel
c) Centrifugation
d) Evaporation

Question 14.
Identify pure substance and mixture from this figure. Why?

Question 2.
Compare the properties of suspensions and colloids.
Answer:

Question 3.
Explain the process of preparation of ice cream.
Answer:

Question 5.
Explain the process of separation of components of air briefly.
Answer: 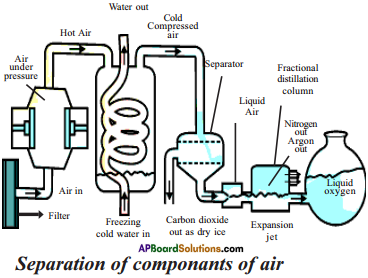 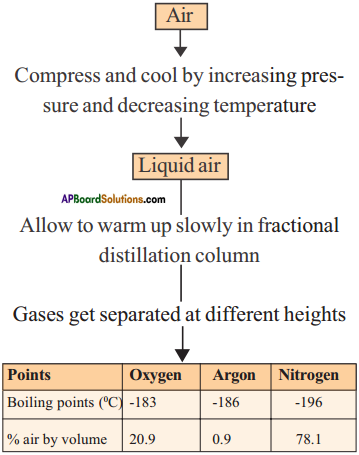 Question 8.
Draw a flow chart to understand the chemical and physical nature of the matter.
Answer: