Question 2.
What is Newton’s first law of motion?
Answer:
Every object will remains at rest or in a state of uniform motion, unless compelled to change its state by the action of a net force.

Question 2.
“With our day to day experience, we must exert some force on an object to keep it moving”.
i) By which law, you can support the above lines?
ii) Which act on the body ? Either force or net force?
Answer:
i) Newtons first law of motion.
ii) Net force. The position of object is changed due to net force only.

Question 2.
What is impulse? Derive the formula for impulse.
Answer:
Impulse :
The change of momentum of an object is called impulse.
Formulae for impulse ⇒ ∆p = Fnet∆t.

Derivation :
We can express the second law of motion as

From the above equation we know that the product of net force and interaction time is called impulse of net force (∆p).

Now look at the table. 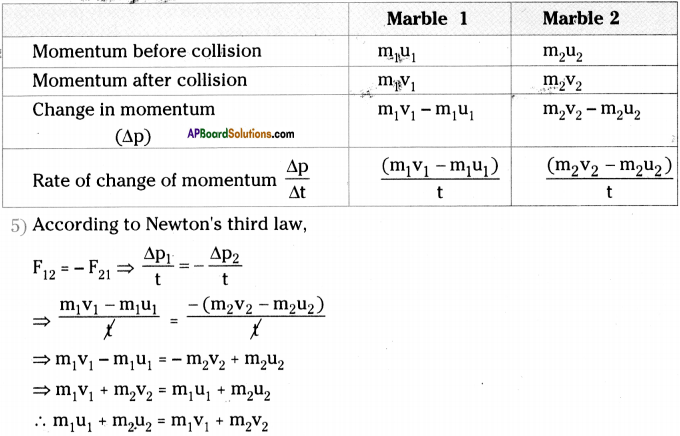 b) Draw FBD of both, masses on it.
Answer: 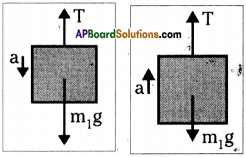 Question 2.
State Newton’s second law of motion.
Answer:
The rate of change of momentum of a body directly proportional to the net force acting on it and it takes place in the direction of net force.

Question 3.
What is inertia?
Answer:
The natural tendency of objects to resist a change in their state of rest or of uniform motion is called inertia.

Question 4.
What is momentum?
Answer:
Linear momentum of a body is the product of its mass and velocity.
Momentum (p) = mass (m) × velocity (v)

Question 7.
What is an impulse?
Answer:
The product of net force and interaction time of a system is called impulse of net force.
Impulse ∆p = Fnet. ∆t.

Question 9.
What is the Galileo’s conclusion on the motion of an object?
Answer:
Galileo gave birth to modern science by stating that an object in motion will remain in same motion as long as no external force is applied on it.

Question 10.
What is the effect of mass on inertia?
Answer:
As mass increases, inertia increases.
Mass is a property of an object that specifies how much inertia the object has.

Question 13.
If action is always equal to the reaction, explain how a horse can pull a cart.
Answer:
Horse and cart constitutes a single system. So they cannot form action-reaction pair. Therefore, horse can pull the cart.

Question 2.
A mass of 0.5 kg has been suspended to a roof as shown in the figure. What is the force exerted by the rope on the object?

Mass :
When force is constant, as the mass increases, the acceleration decreases.

Question 10.
A motor car is moving with a velocity of 108 km/h and it takes 4s to stop after the brakes are applied. Calculate the force exerted by the brakes on the motor car if its mass along with the passengers is 1000 Kg.
Answer:

Question 14.
What happens to a person standing in a bus when the bus which is at rest begins to move suddenly?
(OR)
Explain static inertia with an example.
Answer:

Question 15.
Observe the given figure.
a) What happens to the coin, when we pull the paper with a jerk of force?
b) Why?
Answer:

Question 1.
Give some examples for Newton’s third law of motion from your day-to-day observations.
Answer:
1) Flying of birds :
a) When birds fly, they push the air downward with their wings.
b) The air pushes back the bird in opposite upward direction.
c) These two forces are equal in magnitude and opposite in direction. Hence the bird can fly.

2) Swimming of fish :
a) When a fish swims in water, it pushes back the water.
b) The water pushes the fish with equal but in opposite direction.
c) Hence the fish moves forward.

Question 2.
Derive F = ma.
Answer:
1) Newton’s second law of motion states that the rate of change of momentum of an object is proportional to the net force applied on the object in the direction of net force. 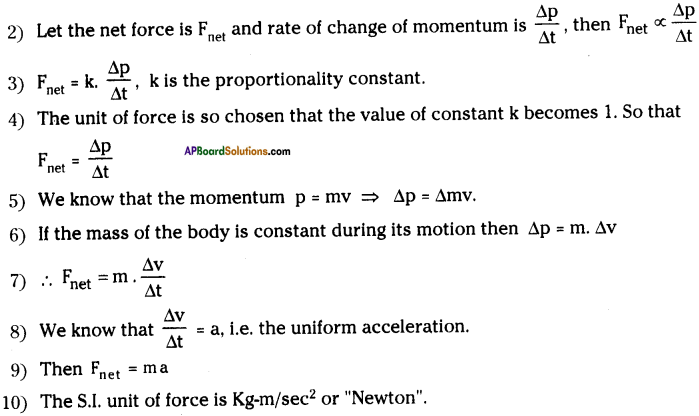 Question 3.
How did Galileo differ the statement of Aristotle ‘The natural state of an earthy object is to be at rest?
(OR)
Write the great experiments of Galileo on inclined planes.
(OR)
How do you appreciate Galileo, the father of modern science?
Answer:

Question 4.
Explain Newton’s third Law of motion with an activity.
(OR)
Take two spring balances of equal calibrations. Connect the two spring balances and pull them in opposite direction. Does they show different readings? Why?
Answer:
Newton’s third law of motion : When an object exerts a force on an other object, the second object also exerts a force on the first one which is equal in magnitude but opposite in direction.

Question 7.
Write suitable law and concept to the given situation or vice versa in the given table. 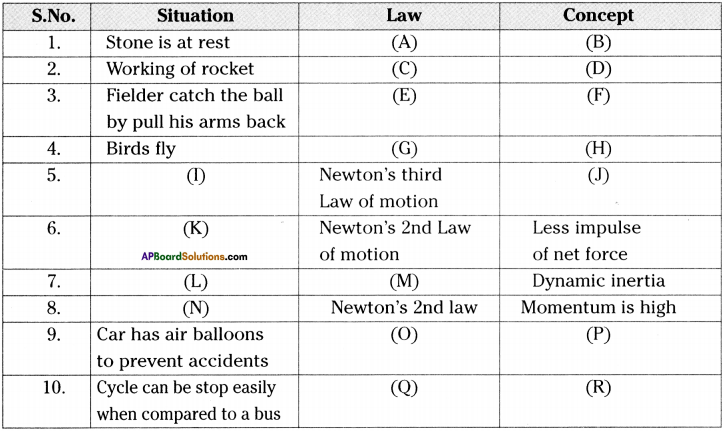