Question 1.
In a triangle ABC, E is the midpoint of median AD. Show that 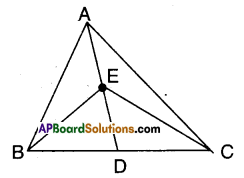 Question 2.
Show that the diagonals of a paral¬lelogram divide it into four triangles of equal area.
Solution:
□ABCD is a parallelogram.
The diagonals AC and BD bisect each other at ‘O’.
ΔABC and □ABCD lie on the same base AB and between the same parallels AB//CD.

Question 3.
In the figure, ΔABC and ΔABD are two triangles on the same base AB. If line segment CD is bisected by \(\overline{\mathbf{A B}}\) at O, show that ar (ΔABC) = ar (ΔABD).

Question 5.
In the figure D, E are points on the sides AB and AC respectively of ΔABC such that ar (ΔDBC) = ar (ΔEBC). Prove that DE // BC. 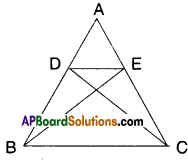 Solution:
ΔDBC = ΔEBC
The two triangles are on the same base BC and between the same pair of lines BC and DE.
As they are equal in area.
∴ BC // DE.

Question 7.
In the figure, diagonals AC and BD of a trapezium ABCD with AB//DC inter¬sect each other at ‘O’. Prove that ar (ΔAOD) = ar (ΔBOC) 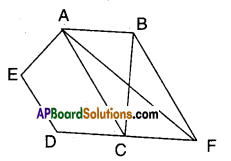 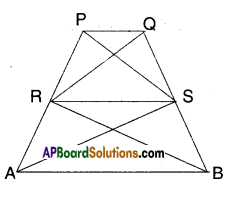 Question 10.
A villager Ramayya has a plot of land in the shape of a quadrilateral. The grampanchayat of the village decided to take over some portion of his plot from one of the comers to construct a school. Ramayya agrees to the above proposal with the condition that he should be given equal amount of land in exchange of his land adjoining his plot so as to form a triangular plot. Explain how this proposal will implemented. (Draw a rough sketch of the plot.) 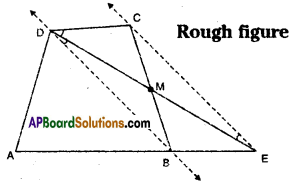 Solution:
Let □ABCD is the plot of Ramayya.
School be constructed in the region ΔMCD where M is a point on BC such that □ABCD ≅ ΔADE
Draw the diagonal BD.
Draw a line parallel to BD through C which meets AB produced at E.
Join D, E
ΔADE is the required triangle. 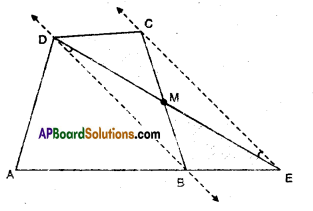