Review Of Your Previous Knowledge 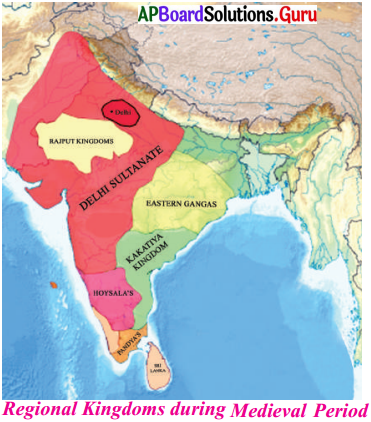 Observe the given Map and respond to the following questions.

Question 1.
Which dynasties do you observe in the given map?
Answer:

Question 2.
According to given map who ruled Andhra region?
Answer:
Kakatiya Kingdom.

Question 3.
Name the South Indian kingdoms in the given map?
Answer:

Question 1.
How did the Kakatiyas emerge as independent rulers?
Answer:

Question 3.
Who were Nayankara? Why were they appointed?
Answer:
Nayankara who served as a feudatory to the Kakatiyas obtained grants of lands from the Kakatiya monarchs to enable them to maintain their status.

“The skilled warriors are called Nayankar.”

They were appointed to collect the taxes and the maintain the army.

These Nayankaras were always loyal to the king or queen.

Question 4.
Describe the Kakatiya art and architecture.
Answer:
Art and Architecture of Kakatiyas :

Question 5.
Read Introduction paragraph “During medieval period …………. art and architecture” comment.
Answer:
During the medieval period five important kingdoms are there in South India. Among them Kakatiyas are very famous.

Question 9.
Which regional dynasties emerged in the south India in Medieval era?
Answer:
During the medieval period five important kingdoms emerged in South India.
They are: 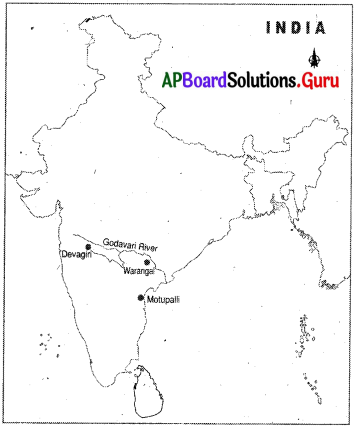 4. In every village some land was kept under king’s possession it was …………….
a) Velipolam
b) Rachapolam
c) Thotapolam
d) All the above
Answer:
b) Rachapolam

IV. Fill in the blanks with suitable words.

Draw boxes with help of given clue words. 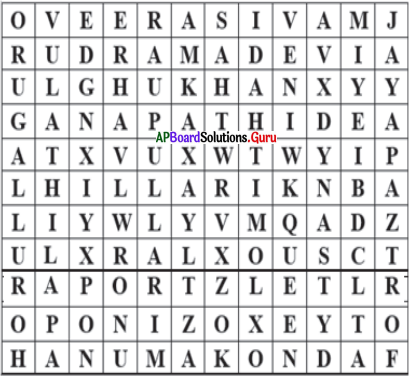 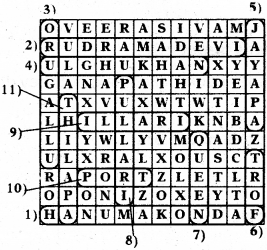 Question 1.
Have you heard any news related to ancient excavations and remains of historical monuments? Discuss in class.
Answer:
Yes, I heard some news about excavations in recent times.

Madurai: A granite plough and a tiny terracotta cubical dice have been found during the latest excavations at Keeladi ancient site in Tamilnadu.

The three-sided granite plough is indicative of the fact that the people of Keeladi was indulged in farming according to him.

Question 1.
How do you think Rudrama Devi got those brave adventurous qualities?
Answer:
It was possible because that she was trained well from her childhood in the martial arts as well as in administrative skills.

They helped her to lead large armies and become a good administrator.

Question 2.
Why did the Kakatiya rulers transfer the Nayankaras frequently?
Answer:
Nayankara were given several villages from where they could collect tax, but they did not keep the villages permanently.

They could be transferred at the will of the king to a new place.

Question 3.
What aspects do you observe while visiting a temple?
Answer:
I observed the following aspects :

Ex : Prolaya Verna Reddy and Prolaya Nayaka had joined efforts to drive the Muslim rule out from their area.

Question 2.
Find out more details about Kakatiya Kala Thoranam from the internet.
Answer: