Question 1.
Write a short note on the governance system in ‘ganas’ or ‘sanghas’.
Answer:
In ‘ganas’ or ‘sanghas’, there were not one but many rulers. Even if there were several men together, each was called a ‘raja’. They performed rituals together. They met in assemblies and took decisions. Women, slaves and wage earners were not allowed to – participate in these assemblies. Both Buddha and Mahavira belonged to Ganas or Sanghas.

Question 3.
Write about Upanishads.
Answer:
Upanishads were a part of the Vedic books. Upanishad means coming and sitting near’ and the books have dialogues between teachers and students. These books try to answer questions like, ‘Where have we come from?’ or ‘Where do we go after death?’

Question 4.
What do you know about the potters of before Mahajanapadas time?
Answer:
Potters made earthen pots. Some of these were grey in colour, others were red. One special type of pottery found at these sites is known as Painted GreyWare. These grey pots had painted designs, usually simple lines, and geometric patterns. Plates and bowls are the most common vessels made out of painted grey ware. These are extremely fine to touch. 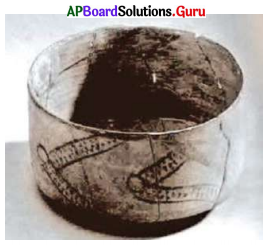 Question 5.
Write about the craftsmen of the Mahajanapadas period.
Answer:
Craftsmen made beautiful and fine pots which were in great demand in all the great towns. They weaved fina clothes which were bought by rich people of other Mahajanapads also. They made gold and silver jewellery. They made vessels and tools of bronze, copper, and iron. They made wooden carts and furniture.

Question 6.
Explain the Magadha Kingdom.
Answer:
Magadha kingdom was spread on both sides of the river Ganga. The river made the land very fertile and the grihapatis could irrigate their lands easily. The river was also used for transporting goods and armies. Parts of the Magadha were forested. Elephants were captured from there and trained for fighting in the wars. Wood from the forests was used for building fortresses, palaces, and chariots. In the southern parts of Magadha, there were iron ore deposits that could be used for making weapons, etc.

Question 7.
Write about Gandhara School art.
Answer:
The Gandhara school of art developed in the region around Takshashila, under the influence of Greek art. Realistic, proportionate, and delicate work in stone were some of the characteristic features of this style. Many images of Gautama Buddha have been sculptured in this style.

Question 9.
Briefly explain Janapada.
Answer:
The plains through which Ganga and Yamuna rivers flow, that plain is called the Gangetic Valley. This plain receives very high rainfall. It is very fertile. These rivers bring silt from the Himalayas and flow throughout the year. Initially, the people of different tribes settled down to practice agriculture inconvenient parts of the valley. These tribes were called ‘jana’ in Sanskrit and the place where they settled was called ‘Janapada’.

Question 10.
Who is Grihapati?
Answer:
Landowners were called Grihapati’s or Gahapatis at the time of janapadas.

Question 13.
Observe the given map and answers the following questions. 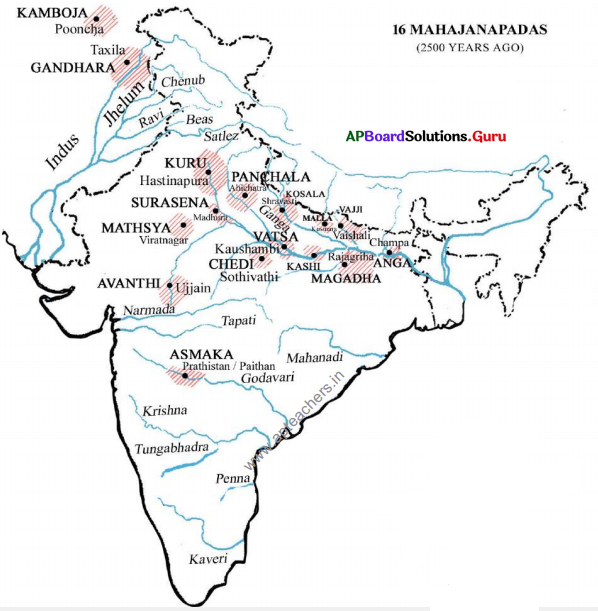 1. What is shown in the above map?
Answer:
16 Mahajanapadas and their capitals.

2. What is the capital city of Kuru Mahajanapada?
Answer:
Hastinapura.

3. What was the Mahajanapada that was situated in the extreme northwest?
Answer:
Kambhoja.

4. What was the Mahajanapada that was situated on the banks of the river Jhelum.
Answer:
Gandhara.

5. In which area is Avanti Janapada in present India?
Answer:
Madhya Pradesh.

6. In which area is Surasena Janapada in present India?
Answer:
Uttar Pradesh.

7. Which Janapada is situated in Madhya Pradesh and to the south of the river Yamuna?
Answer:
Chedi.

8. What is the Janapada situated to the south of Matsya?
Answer:
Avanthi.