Question 2.
Observe the following bar diagram which shows amendments of the Constitution from 1950 to 2013. 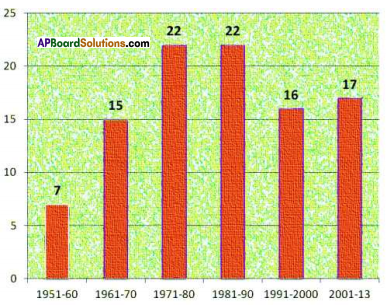 Question 3.
Which type of constitution gives definite powers to both center and state?
Answer:
Federal Constitution.

Question 4.
Which preamble reflects the desire for Peace?
Answer:
Japan

Question 5.
What provisions made by the constitution to facilitate social change?
Answer:
Abolition of untouchability and Reservations.

Question 6.
Write the features of the Federal system.
Answer:

Question 8.
Write any two similarities between the Indian and the Japanese Constitutional preambles.
Answer:

Question 11.
What do you mean by “the Republic”?
Answer:
Any country, where the head of the state is not on hereditary but any elected or nominated person is called the Republic.

Question 12.
Which two words were added to our Preamble?
Answer:
Socialistic and secular.

Question 13.
When was Constitution Assembly formed?
Answer:
In 1946.

Question 16.
What is the Population of India and the Constitution was prepared?
Answer:
400 million.

Question 26.
How many SC members are represented in the Assembly?
Answer:
26 members.

Question 29.
When was the Constitution adopted?
Answer:
The Constitution was finally adopted by the CA on 26th November 1949 and it came into force on 26th January 1950.

Question 33.
How were IAS/IPS appointed?
Answer:
They were appointed through UPSC.

Question 3.
What are the two essential characteristics of a Unitary Constitution?
Answer:

Question 4.
Write the role of Dr. B.R. Ambedkar in preparing the draft Constitution of India.
Answer:

Question 6.
Make a Bar graph based on the below information. 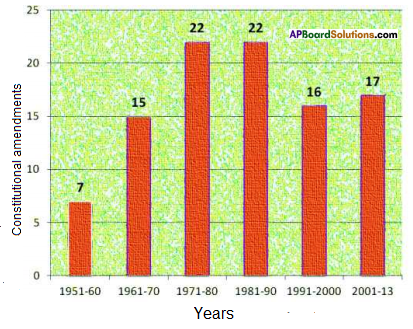 Question 15.
What is one important aspect of social engineering? What was the reason for this?
Answer:
One important aspect of social engineering is the problem of the right of minorities. The sad experience of suppression of Jewish minority in Nazi Germany weighed in the minds of the Constitution makers. They decided to give special protection to the minority community so that they don’t feel marginalised by the majority.

Question 16.
How can the articles be amended?
Answer:
Amending the articles in the Constitution can be initiated only by the Parliament. And it needs the approval of 2/3rd members in both the houses of parliament – Rajya Sabha and Lok Sabha. And some articles may be amended only with acceptance (or ratification) from the state legislature as well. It is further necessary that the President of the ” country also approves the new amendment bill like other laws.

Question 17.
Read the passage and interpret it.

Question 19.
Express your opinion about elections were conducted to Constituent Assembly.
Answer:

Question 20.
Imagine and write what happened if every state in India having different laws.
Answer:

Question 21.
“Too much centralization of power makes that power totalitarian and takes it towards fascist ideals”. Analyze it.
Answer:

1. Popular Sovereignty: India is externally free from the control of any foreign power and internally, it has a free government which is directly elected by the people and makes laws that govern the peopl# So it is the biggest country which is following Parliamentary Democracy System in the world.

2. Fundamental Rights: These are the basic human rights of all citizens. These rights apply irrespective of race, place of birth, religion, caste, creed or sex. These are enforceable by the courty subject to specific restrictions.

3. Directive Principles: These are guidelines for the framing of laws by the government. These provisions are not enforceable by the courts.

4. Cabinet Government: A Council of Ministers with the Prime Minister at the head to aid and advise the President who shall, in the exercise of his functions, act in accordance with such advice.

5. Secularism: Secularism is the basic structure of the Indian Constitution. The government respects all religions. It does not uplift or degrade any particular religion.

6. Socialism: The word ‘socialist’ was added to the preamble by the 42nd amendment. It implies social and economic equality.

7. Federalism: it is a system based upon democratic rules and institutions in which the power to govern is shared between national and state governments.

8. Judicial Independence: The Indian Judiciary is independent of the executive and legislative branches of government according to the Constitution.

Question 4.
Plot the below Information on a Bar graph (Rough diagram). 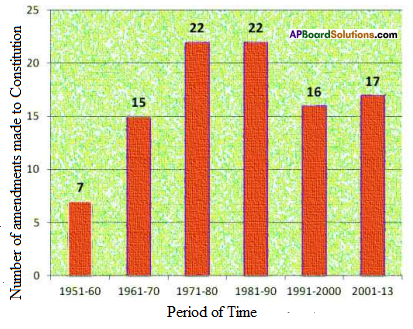 Question 5.
Analyse the graph about Constitutional amendments given below and write your observations.

Question 6.
Answer the following questions based on the below graph.

a) When did the Constitution come into force?
Answer:
January 26th 1950.

c) Why does the Constitution need to be amended?
Answer:
According the changes in circumstances and policies, laws also should be changed.

Question 8.
Our constitution has many provisions facilitating social change. How are they being implemented
Answer:

Question 9.
Observe the below Bar graph and analyse it.
Answer:
This graph is about the amendments made since the Constitution came into force on 26th January 1950 till 2013. The total amendments made were 99. Recently the Supreme Court cancelled the 99th amendment. During 1971-80 and 1981-90, the amendments number is high. Forty-four amendments were made during these two decades. The graph is given decade wise.

Our Constitution makers were aware that laws will have to be amended from time to time. Thus it laid down the provisions for amending the laws and the articles in the Constitution as well. Some laws can be made with the approval of more than half the members in legislative houses. The amendments are made in the Parliament only. Some articles can be amended with the approval of both the Houses of Parliament, i.e. Lok Sabha and Rajya Sabha. Some need ratification from the states. Finally, the amendments are approved by the President. Then the amendments come into force.

The amendment means to bring some change in existing law of the constitution. Generally, an amendment is necessary on the basis of public needs. In the initial years of our independence, the amendments are only 7. In the next decade, it went up to more than double. The period, 1971-80 and 1981-90 is crucial in Indian Politics. The emergency was declared by Indira Gandhi. Single Party domination was ended and Non-Congress governments came in to power. In 1984 Indira Gandhi was assassinated. From 1991 onwards again the number is decreased.

The constitution can be amended without breaking or spoiling the spirit or its basic principles. In the 1970s, two words ‘Secular’ and ‘Socialist’ are added into the Preamble of the Constitution. According to the judgment of the Supreme Court in the case of Keshavananda Bharati, some basic principles can not be changed. 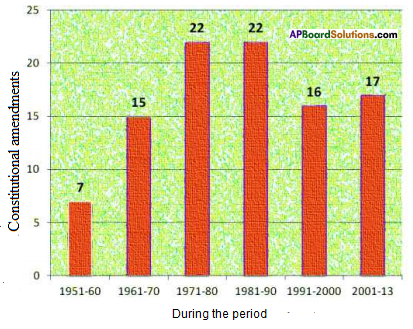 f) Why were the amendments less in 1951- 60?
Answer:
Constitution was newly formed and society did not change much and people were illiterate to anticipate any change.

Question 12.
Read the following para and comment on what the Constitution did for social change/change of society.

Question 13.
On the outline map of world, identify the following places. 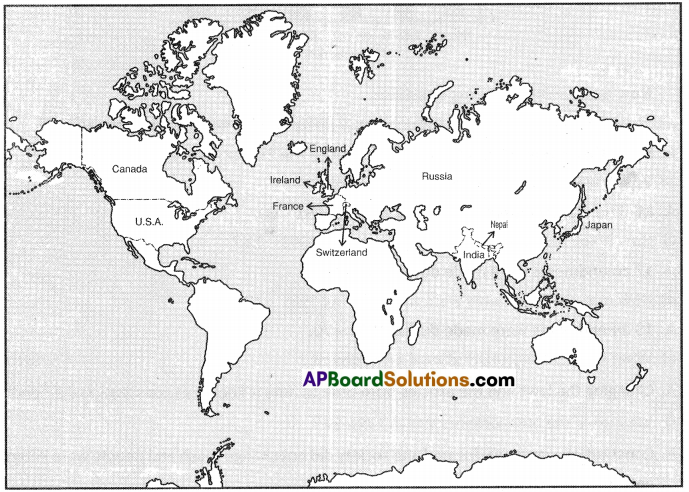 Question 14.
Locate the following in the given map of the World.
1. This country’s constitution was completed in 2015.
Answer: Nepal

2. This country’s wishes for peace in its constitution.
Answer: Japan