Question 1.
Why were the large empty drums placed outside Mr. Nana’s house?
Answer:
Some chemical factories of Italy unloaded metal drums of poisonous chemical near a stream that the villagers get their drinking water from. There were such large empty metal drums outside Mr. Nana’s house. These drums might have fallen down and rolled or been rolled by playful children.

Question 2.
What harm can the pyramid of identical drums cause to the villagers?
(Or)
What are the evil effects of pyramid of drums?
Answer:
The slimy contents of various colours are leaking out from the drums and flowing down on to the African earth and into the stream which is a source of drinking water to the villagers. They may cause health hazards.

Question 4.
Was Thomas Agonyo correct in his findings? Justify your opinion.
Answer:
Yes, Thomas Agonyo was correct because 13 people had died with terrible pain and lots of children were sick because of the metal drums that contained poisonous chemicals.

Question 5.
Why didn’t the people move from their place?
Answer:
They had no money to buy land. So they had no choice.

Question 6.
There is a repetition of sentences with ‘some’ in the passage. Read the passage again and write down the sentences and the function of ‘some’ in each one of them. Do you find any other repetitions in the passage? If yes, mention it. .
Answer:
i) Some of them are badly corroded, their slimy contents of various colours — grey, dark green, bright orange, etc. – leaking out, down, onto the baked African earth and into the stream.
ii) Some have fallen down and rolled – or been rolled by playful children – into the bush.
iii) Some are smoking in the midday heat.
iv) Some are swelling, as if their contents are bursting to get out.
v) Some have already burst.

Other repetitions:
i) “They came on a Wednesday”, said Sunday, “Many, many big lorries ”
ii) They took all day unloading them.
iii) They gave the Chief a brown paper bag – I saw him smiling as the lorries drove away.

Adjectives or adjective phrases describing the gloomy situations in the village :
a) rusting corrugated iron roof
b) frowning
c) a troubled look
d) terrible pain
e) mountain of death in the clearing

Example :
I’ve got some apples in my basket and some water in my bottle.
I haven’t got any apples in my basket, nor any water in my bottle.
Generally quantifiers are used before nouns.
Some, any, all, no, no one, both, each, every, several are some of the quantifiers.
“Some” is usually thought of as the positive counterpart to “any” in many circumstances.
“Any” can be used before countable and uncountable nouns usually in questions and negative sentences.

Quantifiers come before nouns. Some of the quantifiers you find in the text are: some, any, no. You also find numerals. Pick out the nouns along with quantifiers and numerals and write them down and analyze the meaning they convey.
Answer:

Fill in the blanks appropriately with the following quantifiers: no, any, all, some, each, several, and every.

Mr. Sunday Nana, his wife and four children live in Koko village, Nigeria. Five years ago the village was like any other African village — picturesque, colourful and noisy. But now in a clearing 200 m away from the village, next to a stream that the villagers get their drinking water from, is an enormous pyramid of identical drums reaching to the sky. The skull and crossbones symbol is clearly visible on each. Later Thomas Agonyo, one of the brightest boys in the village explained to the villagers that the drums contained poisonous chemicals and they had come from Italy. 13 people had died and lots of their children were sick in the last five years because of those poisonous drums.

corrugated (adj) : shaped into a series of regular waves

skull and cross bones (n) : symbol to show that something is dangerous

swelling (v) : the condition of being larger or rounder than normal

clearing (n) : an open space in a forest

Question 1.
The people in this village were affected by chemical factories. Where, in your opinion, should the factories be built?
Answer:
The factories should be built in open non-fertile lands far from habitats. Eco-friendly industries with minimum use of chemicals can be encouraged even in villages or towns.

Question 2.
If it is necessary to build factories near the villages, what precautions should be taken to keep the villagers safe?
Answer:
The chemicals released from factories would not be dumped in open fields and into rivers. Special ash ponds must be there for the discharged chemicals and they must be far away from the habitations.

Question 3.
The narrator said at the end, ‘There is so much they didn’t tell you, I thought”- What was that so much that was not told, according to you?
Answer:
Vijayasama sighed and reported to the narrator that the leather industry management didn’t tell them that the chemicals would be dumped in open fields and into their rivers. They didn’t tell them that their women would have to walk ten kilometers everyday and they would get ulcer and sores on their bodies.

But the narrator thinks that they don’t know some more hidden hazards till now. They don’t know there won’t be any life in Ponnimanthuri village one day. They will either be died or been forcibly evacuated. By keeping this view the narrator said like that at the end.

Ponnimanthuri village was once a beautiful village with all the green fields around and good harvests. But now it became highly polluted due to leather factory which uses as many as 250 different chemicals including heavy metals such as cadmium, arsenic and chromium. The villagers hope that the menfolk would get jobs and they would all become rich. But these chemicals poison their fields so that nothing would grow. They got ulcer and sores on their bodies. All are in a state of despair.

wistfully (adv) : thinking sadly about that we would love to have

outstretched (v) : spread out as far as possible; pulled out to full length

ominous (adj) : suggesting that something bad to happen in future

horizon (n) : the point where sky appears to meet sea or earth

chimney (n) : a structure to carry smoke or steam up away

ulcer (n) : a sore area inside the body

trailed off (phr. v.) : became gradually quieter and then stopped

Question 2.
What havoc can radioactive dust cause?
Answer:
Radioactive dust can cause nausea, headache, vomitings, all types of cancers especially skin cancer and leukaemia, white blood cells damage and the damage of brain cells, etc. It can cause vomits and hair fall. The people grow thin and sores appear all over their bodies.

Question 3.
Pick out the words/expressions/images that describe the tragedy caused by the radioactive dust.
Answer:
a) ………, all three died – all three on the same day.
b) They’re buried over there.
c) Lots of village children are. And adults.
d) It was a ghost town.
e) No one lived there anymore.
f) They had either died or been forcibly evacuated.
g) The fields were barren.
h) Nothing grew.
i) Nothing ever would again.
j) There was no bird-song.
k) No rabbit peered at me.
l) No cow endlessly chewed.
m) No horse neighed.

Out of the three villages you have read about, choose one village of your choice (you may also choose a completely different one). You are a TV reporter. You need to go to one of the villages and from there you have to report orally to the news channel what all you find there. How would you report?

Write in a spoken discourse the dialogue between you and the TV newsreader.The beginning is given below :

Abhi : Vandana ! Here the situation is horrible. We find many people in the beds being sick. The people are in need of help.

TV Newsreader : Is the enormous heap of identical drums there? Where is it located?

Abhi : Yes, the drums are still there. They are in a clearing 200 m away from the village, next to a stream, that the villagers get their drinking water from.

TV Newsreader : Do you find any symbols on those chemical drums?

Abhi : Ya, skull and crossbones symbol is clearly visible on each which indicates danger.

TV Newsreader : How many years ago were the drums unloaded and who unloaded?

Abhi : Here, the people said that they were unloaded five years ago and many many big lorries came and unloaded them.

TV Newsreader : How do they come to know that the drums contain poisonous chemicals?

Abhi : Thomas Agonyo, one of the brightest boys in the village who started university in Lagos found out this problem.

TV Newsreader : Abhi, did you talk to him ?

Abhi : Ya Vandana, I talked to him. He said that they had come from Italy and due to this chemical pollution 13 people have died until now. Lots of children are sick. They have been in pain, terrible pain before death.

TV Newsreader : Abhi, did you inquire anybody else in the village?

TV Newsreader : Did they inform the government about the intensity of pollution?

Abhi : Yes, they informed the government and wrote to Italy also. But they do nothing.

TV Newsreader : What did they want to do now? Is there any chance to vacate the village and to go to another place?

Abhi : They have no choice as they are poor and they have no money to buy land.

TV Newsreader : So what do they want to do?

Abhi : Vandana, they finally concluded that the mounain of death in the clearing is their neighbour.

TV News Reader : OK ! Thank you for your report, Abhi.

TV News Reader : I request the authorities concerned to respond positively at least now and to find out the solution for their problem.

Talk to your grandparents about life fifty years ago. Talk to them as to how the plants, animals and water bodies were cared for or not cared. Seek the views of the elders and fill in the table.

Based on the information you have gathered in the last column of the table, discuss in groups how best the youngsters can help save/protect the environment. List the specific recommendations.
Answer: 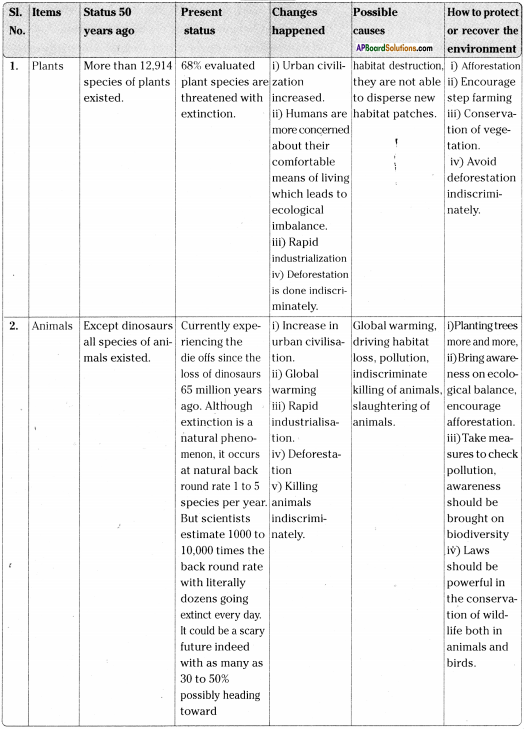 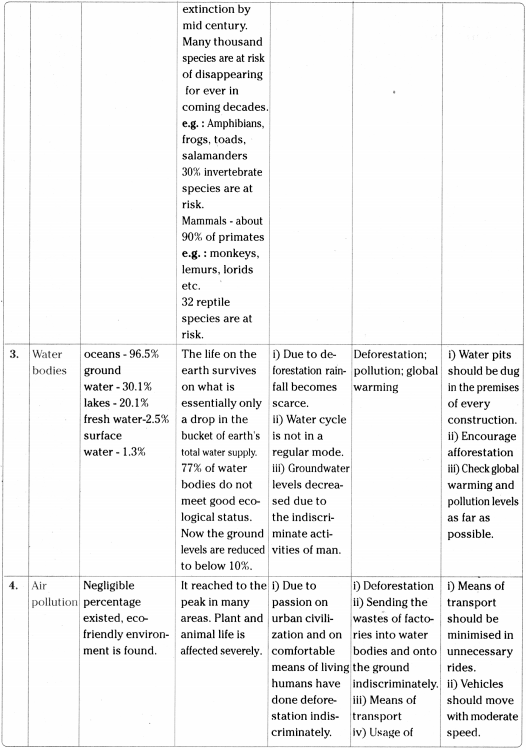 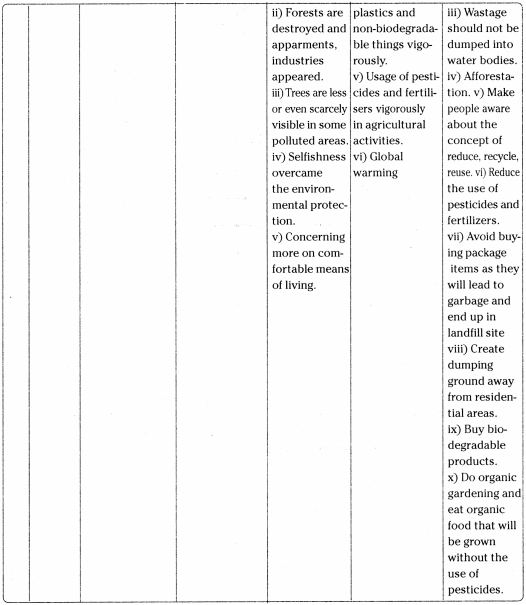 Last and the foremost, as I mentioned earlier in order to prevent pollution we the humans should take responsibility. If every individual takes his/her responsibility one day will come when the world can breathe smoothly.

Natasha Revenko shared her bitter-sweet memories with the narrator. Natasha belongs to Vorobyov village in Ukraine. On April 26th 1986 which was her mother’s birthday a horrible incident happened. A big explosion from a nuclear reactor occurred in the morning, They saw a cloud of white smoke coming from the nuclear reactor. As it was a Saturday, the weekend the children were playing outside, picked up handfuls of the dust and threw it at each other, laughing. On Wednesday they were warned by the authorities not to touch the radioactive dust. But it was too late. A week later the children began to vomit and their hair fell out. Two weeks later her three children died £>n the same day. Lots of village children and adults died.

explosion (n) : a sudden violent burst and sound of it

apron (n) : a piece of clothing that covers the front part of the clothes and is tied around your waist

pinched (adj) : pale and thin because of worry or illness

pale (adj) : white because of illness