Question 1.
What is the difference between 2N and N2?
Answer:
2N means two nitrogen atoms.
N2 means one nitrogen molecule.

Question 3.
The atomic number (Z) of an element is 6. Name the element.
Answer:
Carbon.

Question 4.
Write any one precaution in doing the experiment chromotography.
Answer:
Make sure that the ink line or mark does not touch the water.

Question 1.
Fill in the blanks in the table using the given information.

Question 2.
Read the following information and answer.
Molecular mass of a molecule is the sum of the atomic masses of individual atoms in it.

Question 1.
How did the element Helium get its name?
Answer:
Place of discovery of element can also play a role in its naming. The gas which was first discovered in the sun was named Helium. Because, Greek name for sun is helios’.

Question 2.
What is an atom?
Answer:
An atom is the smallest particle of an element that can participate in chemical reaction and retain all its properties.

Question 3.
Is ‘Na’ an element or compound? Why?
Answer:
‘Na’ is an element, because it was formed by the same atoms of ‘Na’.

Question 4.
Is O2 an element or compound? Why?
Answer:
O2 is a compound, because O2 is formed by combining two oxygen atoms.

Question 5.
What is an Avogadro number? What is its value?
Answer:
The number of particles present in one mole of any substance is the Avogadro number (NA).
This is equal to 6.022 × 1023.

Question 7.
What is atomic mass?
Answer:
The number of times one atom of given element is heavier than 1/12th part of atomic mass of carbon -12 is called its atomic mass.

Question 8.
How molecules are formed?
Answer:
A molecule is formed by the combination of different kinds of atoms that are chemically bonded together by attractive forces.

Question 1.
Who is called as the father of modern chemistry? What are his main contributions?
Answer:

b) Law of constant proportions :
A given chemical substance always contains the same elements combined in a fixed proportions by weight.

Question 4.
What is the proposal of Indian sage Kanada, about atom?
Answer:

Question 5.
What is the use of symbols for elements?
Answer:

Question 6.
What are the characteristics of a symbol?
Answer:
1) A symbol can have either one or two letters of English.
Ex : H, He, N, Ne, etc.

Question 11.
If one mole of carbon atom weighs 12 g. What is the mass of 1 atom of carbon?
Answer:

Question 13.
Given the names of the elements present in the following compounds.
a) Quick lime
b) Hydrogen bromide
c) Baking soda
d) Potassium sulphate
Answer:

Question 15.
Anitha wrote the formula for oxygen molecule as 20. Is it correct or not? Why?
Answer:

Question 1.
How elements got their names? Explain with examples.
Answer:
I: Sometimes elements are named based on their property.
Ex :
1) The Latin name for water is “hydro”.
So the element that combined with oxygen to give water was named as ‘hydrogen’.

II. Place of discovery of element can also play a role in its naming.
Ex : The gas that was first discovered in the sun (Greek name for the sun is “helios”) was named as ‘helium’.

Question 2.
Define the following terms.
a) Atomicity
b) Valency
c) Ions
Answer:
a) Atomicity :
The number of atoms constituting a molecule is known as its atomicity.

b) Valency :
Atoms of the elements have power to combine with atoms of other elements. This is known as valency.
Ex :
1) Valency of carbon is 4.
2) Valency of oxygen is 2.
3) Valency of hydrogen is 1.

Question 3.
Explain the method of writing a formula to a compound using criss – cross method, with the help of an example.
Answer:
The following steps should be taken while attempting to write a chemical formula using criss – cross method.
Ex : Take sodium carbonate as an example.
1) Write the symbols of atoms or group of atoms side by side, usually the cation first.
NaCO3

2) Write the valency of each atom or group of atoms on the top of its symbol.
Na¹ (CO3)²

3) Divide the valency number by their highest common factor if any to get the simple ratio.
Na¹ (CO3)²

4) Interchange the valency and write the numbers to the lower right of the constituents as subscript.
Na2(CO3)1

5) If any constituent receives the number 1, ignore it while writing the formula.
Na2CO3

6) If group of atoms received the number more than 1, enclose it within brackets. Hence the formula for the sodium carbonate is Na2CO3.

c) Mole :
1) One mole of a substance is the amount of the substance which contains as many particles or entities that are equal to the atoms present in exactly 12 grams of C12 isotope.
2) The number of particles present in one mole of any substance has a fixed value of 6.022 × 1023. This number is called Avogadro’s constant (NA).

d) Molar mass :
The mass of 1 mole of a substance which is expressed in grams is called its molar mass.

Question 6.
Draw the pie diagram to understand the atomic mass and explain it.
Answer: 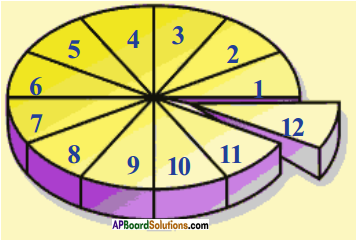 Question 7.
Illustrate the concept of mole through a diagram.
Answer:
Mole : 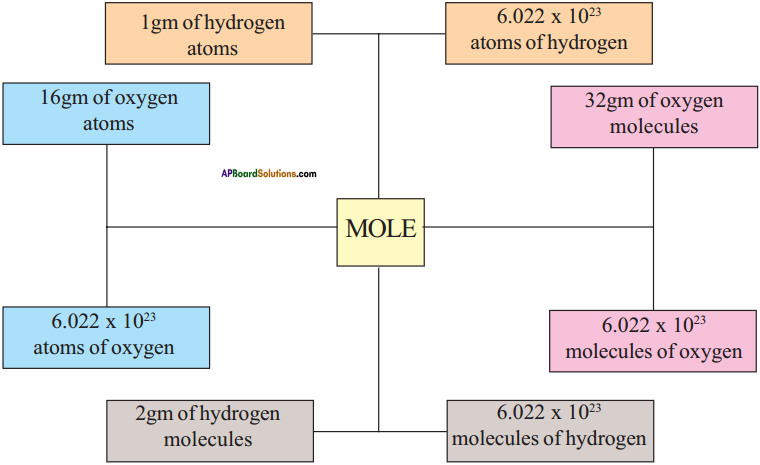 Question 8.
How can you appreciate John Dalton for proposing his atomic theory?
Answer:

Question 9.
How do you feel after studying the symbols and formulae of different elements and compounds?
Answer:

Question 10.
Describe the experiment conducted by Joseph L. Proust, which lead him to propose law of constant proportions.
Answer: 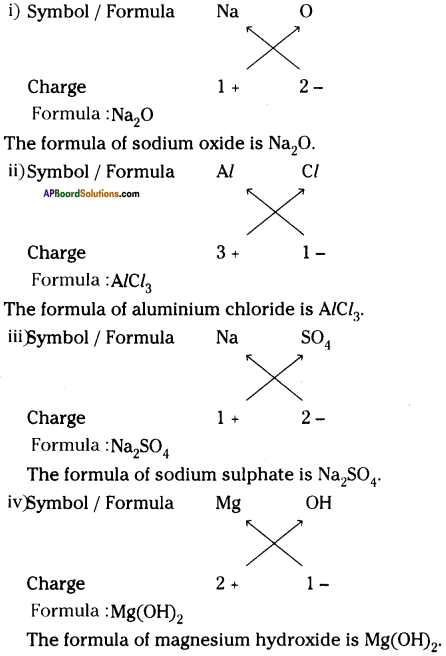 Question 13.
What are the rules you have to follow while writing a chemical formula?
Answer:

Question 15.
a) What is atomicity?
b) Give examples.
c) Why do elements have different atomicities?
Answer:
a) Atomicity:
The number of atoms constituting a molecule is known as its ‘atomicity’.

b) Examples :
A molecule of hydrogen consists of two atoms of hydrogen. Here the atomocity is two. Hence it is known as a diatomic molecule. Helium (He), Argon (Ar) exist as single atom. Hence they are known as monoatomic.
Ozone (O3) has tetratomic
Sulphur (S8) has octatomic