Question 1.
What type of energies are possessed by the objects shown in below figures.
Answer: 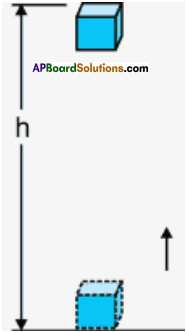 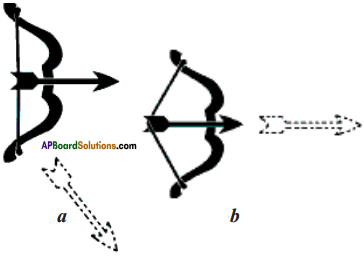 Question 1.
According to the scientific concept of the work, two conditions need to be satisfied in order to say that work has been done.
i. A force should act on the object.
ii. The object must be displaced or there must be change in position of the object. Now complete the table given below.

Question 1.
What is meant by one joule work?
Answer:
1 joule work is the amount of work done on an object when a force of 1 Newton displaces it by 1 m along the line of action of the force.

Question 2.
What happens to the speed of a ball while it moves up with an initial velocity?
Answer:
As the ball moves up, the gravitational force acts against to the direction of motion of the object. Hence its velocity slowly decreases.

Question 5.
Define energy.
Answer:
Energy is defined as the capacity to do a work.

Question 6.
Why does a person get tired standing at a place for long time?
Answer:
Though the person standing is not doing any work externally a lot of work is being done inside the body.

The muscles of the body become stretched when he stands for long time and heart has to pump more blood to muscles. This leads to loss of energy inside the body and hence he gets tired.

Question 12.
A battery lights a bulb. Describe the energy changes involved in the process?
Answer:
Chemical energy is converted into heat energy then light energy.

Question 17.
What is ‘Biomass’?
Answer:
The material contained in the bodies of plants and animals is Called ‘Biomass’.

Question 19.
What is Nuclear Energy?
Answer:
The energy released during a nuclear reaction is called nuclear energy.

Question 1.
Define power and mention its units.
Answer:
Power is defined as the rate of doing work or rate of transfer of energy.

The unit of power is ‘Watt’ and denoted by the symbol ‘W’. 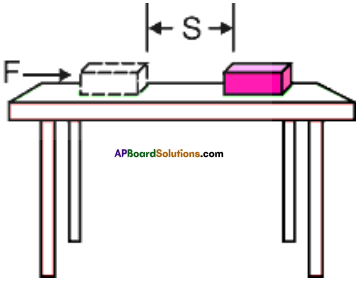 Change in kinetic energy stored as work done is – 210 J

Question 6.
The potential energy of a freely falling object decreases progressively. Does the violate the law of conservation of energy? Why?
Answer:
No, it is not violating law of conservation of energy because when freely falling object moves towards ground its speed increases due to gravitational force so potential energy is converted into kinetic energy.

Question 7.
Calculate the work required to be done to stop a car of 1500 kg moving at a velocity of 60 km/hr.
Answer:

Question 9.
In each of the following a force, F is acting on an object of mass, m. The direction of displacement is from west to east shown by the long arrow. Observe the diagrams carefully and state whether the work done by the force is negative, positive or zero.

Question 2.
Look at the activities listed below. Reason out whether or not, work is done in the light of your understanding of the term work.
1. Suma is swimming in a pond.
2. A donkey is carrying a load on its back.
3. A wind-mill lifting water from a well.
4. A green plant is carrying out photosynthesis.
5. An engine is pulling a train.
6. Food grains are getting dried in the sun.
7. A sail boat is moving due to wind energy.
Answer: