From the above data, what can you say about the motion of the object?
Answer:
The object is in the uniform motion and its speed is constant.

Question 2.
Frame any one question to understand Newton’s third law of motion.
Answer:
How does rocket engine work?

Question 2.
What happens to the speed and the direction of motion of a ball rolling down an inclined plane?
Answer:

Question 2.
Write an equation of motion to find the distance travelled when initial velocity, time, and acceleration are given.
Answer:
s = ut + \(\frac{1}{2}\) at²

Question 3.
Draw a displacement vector from Visakhapatnam to Hyderabad to the following diagram. 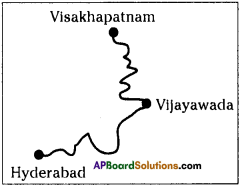 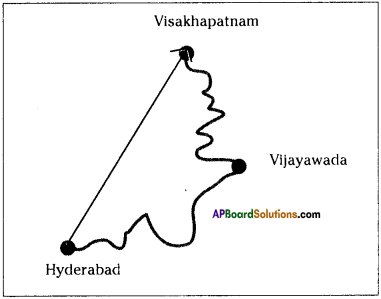 Question 4.
Difine acceleration.
Answer:
The rate of change of velocity in an object is known as its acceleration.

Question 8.
A ball is thrown up with an initial speed of 4m/sec. Find the maximum height reached by the body.
Answer: 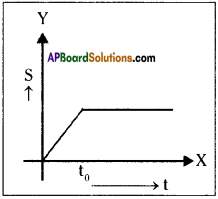 Question 2.
An object reaches other end of a diameter in a circular path of radius 7 m in 7s. Find speed and velocity of the object?
Answer:

Question 3.
A person moves 3 km towards east and turned toward north and travelled a distance of 4 km. Find total distance and total displacement.
Answer:

Question 4.
An object completes 1/4th revolution of a circular path of radius r. Then find the ratio of distance and displacement.
Answer:

Question 5.
a) What is a vector? Give example.
b) What is a scalar? Give example.
Answer:
a) Vector :
The physical quantity which is specified with magnitude and direction is called a vector.
Eg : Displacement, velocity are vectors.

b) Scalar :
The physical quantity which does not require any direction for its specification is called ‘scalar’.
Eg : Distance, time are scalars.

Question 6.
How does a vector represents? Explain.
Answer: 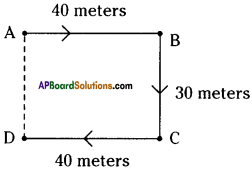 Note : She used this diagram.
Answer:
By using the diagram Anitha asked the following questions :

Question 9.
Draw a displacement vector and a velocity vector to the given path of motion of a body. 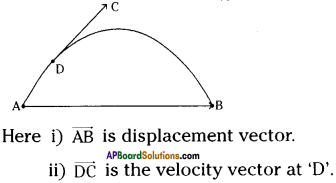 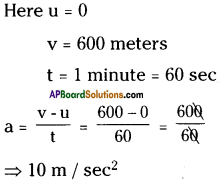 The acceleration of the bus is 10 m/sec². 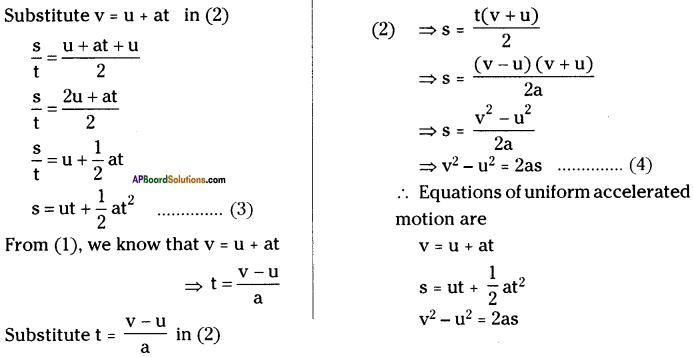 Question 4.
Describe the graphical method to calculate the instantaneous speed at a given point.
Answer: 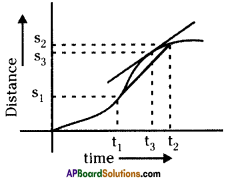 Question 5.
What is difference between speed and velocity?
Answer:

Question 6.
Derive s = ut + \(\frac{1}{2}\) at²
Derive one equation for displacement of a body which is in the uniform acceleration.
Answer:
1) Let u be the initial velocity,
v be the velocity at time ‘t’.
a be the acceleration,
s be the displacement 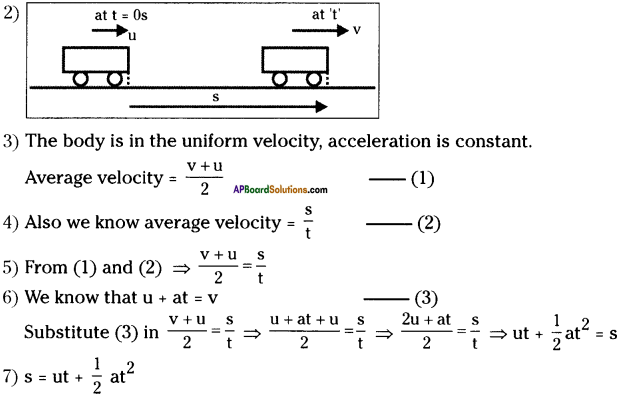 Question 7.
A car travelled from A to E station in 3 minutes. Viewing path given below in the figure. find
i) distance
ii) displacement
iii) speed
iv) velocity 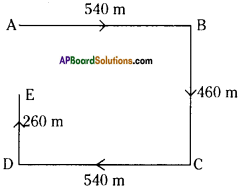 ii) Displacement = Distance between A and E

ii) Whirl a stone which is tied to the end of the string continuously.
Here it’s direction of motion changes but speed remains constant.

iii) The path taken by a stone, which was thrown into the air.
Here speed and direction of the motion both changes simultaneously.