Question 1.
Was there any difference between the attitude of the British and the Nizams when it came to democracy?
Answer:
No. Both suppressed the people.

Question 9.
What was the role of women in Telangana Armed struggle?
Answer:
Women in the Telangana Struggle:
Women suffered most under the rule of Nizams and doras. They were constantly harassed. They not only had to work for the landlords but also to serve the visiting officials. Many women were made slaves of the landlords. Such women attended the night schools of Andhra Maha Sabha and decided to join the Sanghams and the Communist Party. Some of them took arms and fought the Razakars, some of them sang songs and inspired people, some of them acted as doctors and nurses. But they had to make supreme sacrifices for the sake of the movement.

Question 11.
How was the Telangana Armed Struggle in 1947-48?
Answer:
The movement was transformed in 1947-48 into a broad anti-Nizam and anti-feudal struggle demanding merging of Hyderabad with independent India. The people burnt the records of the village officials and moneylenders and seized the grains hoarded by the landlords and the merchants. To broaden the scope of the movement and integrate various sections into it, the demand was raised to merge Telangana with the other Telugu speaking regions to create Vishal Andhra.

Question 12.
How was the Hyderabad state merged in India?
Answer:
When India became independent in 1947, Osman Ali Khan, the Nizam wanted Hyderabad to remain as an independent kingdom. The common people of the state wanted to join Independent India and a large campaign was organized by the Hyderabad State Congress led by Ramananda Theertha. The Razakars attacked them too. Then the Indian government decided to end this anarchy and sent armed forces to Hyderabad. Hyderabad was finally integrated into Indian Union in September 1948.

Question 13.
You read about the demands of Andhra Maha Sabha (1935). Explain in what way the demands are being implemented now.
Answer:

Question 14.
Observe the map and fill in the blanks. 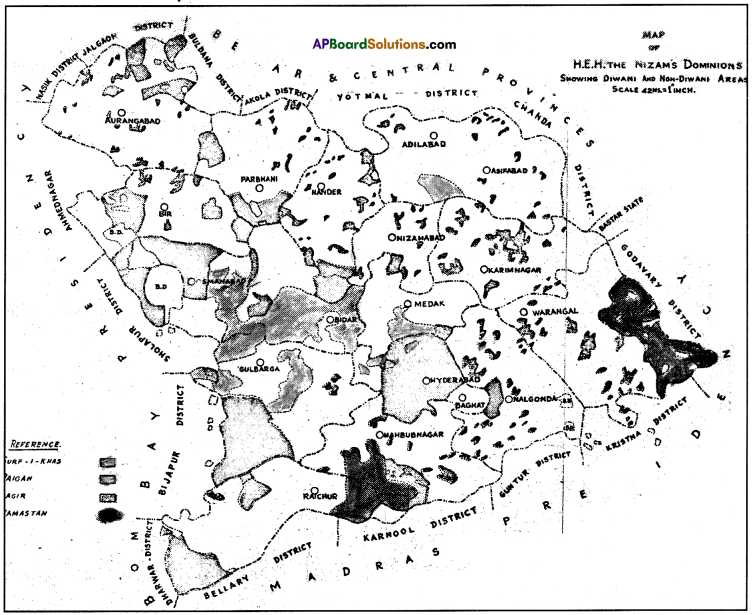