Question 2.
What is a sundial?
Answer:
A clock based on shadows of an object due to sunlight is called sundial.

Question 4.
Why does solar eclipse occurs only on a new moon day?
Answer:
A solar eclipse happens when moon passes between the earth and sun, causing people on earth to be completely or partially unable to see the sun, because the moon is in the way that is possible only on new moon day.

Question 5.
What are the spots on the moon?
Answer:
The black spots on moon are creators of different size which on seeing from earth appear as black spots during full moon day.

Question 6.
What are stars?
Answer:
The self luminous bodies which emit light and heat in the sky are called stars.

Question 7.
What are constellations?
Answer:
The group of stars which appear in the shape of animals or human beings are called constellations.

Question 10.
What is the solar system?
Answer:
The sun and the celestial bodies which revolve around it form the solar system. It consists of large number of bodies such as planets, comets, asteroids and meteors.

Question 17.
Does the sun rise in the east on Venus? If the answer is no what is the reason?
Answer:
No, the reason is Venus rotates from east to west. So, on Venus the sun rises on west.

Question 19.
How earth appears from space?
Answer:
The earth appears blue green due to the reflection of light from water and Iandmass on its surface.

Question 21.
What are asteroids? Where does they present?
Answer:
Small objects revolve around the sun are called asteroids. They are present between Mars and Jupiter.

Question 22.
What is Halley? When does it last appear? Can you tell when Halley visible again?
Answer:
Halley is a comet, which is periodically appear for every 76 years. I was last seen in 1986. It will visible once again in the year 2062.

Question 24.
Why Pluto is not consider as a planet?
Answer:
International Astronomical Union (IAU) decided that Pluto was no more a planet because it does not follow the rule of “cleared the neighbourhood.” That means sometimes it is entering into orbit of Neptune.

Question 25.
What is an orbit?
Answer:
A planet has a definite path in which it revolve around the sun. This path is called an orbit.

Question 2.
What are planets? Why they appear brightly than stars?
Answer:

Question 3.
What are the motions of planets?
Answer:
Every planet has two types of motion.

Question 4.
Why earth is only planet on which life known to exist?
Answer:

Question 5.
What are comets? Write briefly about comets.
Answer:

Question 6.
Why does pole star seem to be stationary?
Answer:
The Pole Star is situated in the direction of the earth’s axis and that is why it does not appear to move even though all stars appear that they are moving because of the rotation of earth. So the pole star seems to be stationary.

Question 7.
What factors to be taken into consideration to view the pole star at your place?
Answer:
The position of pole star is fixed and does not change.
a) We can locate the pole star with the help of two constellations Great bear and Cassiopeia.
b) If you are able to spot only the Great bear look at the two stars that form the outer side of rectangular head.
c) Extend the imaginary line from these two stars.
d) Pole star will be located on that extended line with a distance about 5 times the distance between the two stars.
e) If only Cassiopeia is visible, the pole star will be located on the line extended from the middle star.

Question 8.
Name the periodic comet. Why is it so called?
Answer:

Question 9.
What do you mean by remote sensing satellite?
Answer:

Question 11.
How does the motions of a satellite differ from a planet?
Answer:
A satellite revolve around same planet in a fixed orbit while a planet revolves around the sun in a fixed orbit. Planets revolve faster than satellites.

Question 3.
Write an activity to show how path of sun and moon changes during solar eclipse.
Answer:
Make two discs one white and one black of the size of sun and moon in figure. 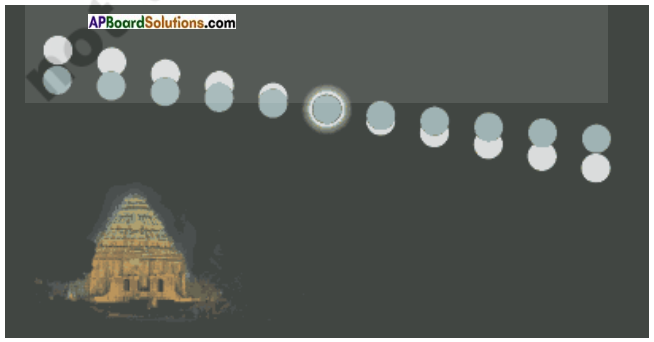 We shall now find the centres of the sun and moon at each stage. To do this take the white disc we have made and place it exactly on the white portion of any of the stages of diagram.
Pierce a hole through the centre of white with a pin to mark the spot at the centre of the sun’s position at that stage in the diagram. Remove the white disc and mark the spot with the pencil.
In this way, mark the sun’s centre at every stage of the eclipse in diagram. Join the spots with a line. This line depicts the path of the sun.
To find the moon path, repeat the exercise, but this time use the black disk and mark the centres of the black portions at each stage of the eclipse. Join these spots with a line and we will get the path of moon during the eclipse.

Question 5.
How people came to an understanding that earth is spherical?
Answer:
In olden days people felt that earth is flat because it looks flat. However they had a doubt, if it is flat how does the water in ocean remain there, Why does it not spell out of the earth ? To get clarity they assumed fencing around flat earth. After that,

Question 6.
How does people came to an understanding that earth rotates on its own axis?
Answer: People from olden days thought that earth is located in the centre of the universe with sun, moon and stars moving around it. They also thought that sun, moon and stars are located on transparent concentric spheres surrounding the earth, because they are not falling down.
The three spheres are rotating on their axis from east to west that is why sun, moon and stars appear to revolve from east to west around the earth. They also assumed that the shpere on which sun is located rotates east to west and oscillate from south to north that is why Uttarayanam and Dakshinayanam are happening.
Because of the uneven movement of some stars (actually they are planets) which they observed, it is very difficult to explain model of universe which required so many transparent spheres around earth. Nicholas Copernicus suggested that sun is at the centre of universe and all other celestial objects are revolving around the sun from west to east. It was assumed that earth rotates on its axis. This model explain the occurence of day and night.
In this way people came to an understanding that earth rotates on its axis.

Question 7.
Conduct an experiment to find out the local noon time of your village/town.
Answer:

Now India is one of the six countries which have sent satellites to the moon.

Question 10.
What is the difference between meteor and meteorite?
Answer:
a) Meteor: Meteors are stony or metallic bodies of very small size, travelling in interplanetary space and become visible when they travel through the earth’s surface. The meteors are also called shooting stars.
b) Meteorite: While travelling through the earth’s atmosphere, these fast moving bodies (meteors) get heated up to a very high temperature by air friction. The heat produced is so high that the meteor starts glowing and then burnt last. The very large meteors are able to survive from such heat destruction and actually reach the earth’s surface. These meteors are called meteorites.