Question 3.
Do you agree/disagree with the daughter of the mother rat? Give reasons for your response.
Answer:
I agree with the daughter of the mother rat. Depending on another person’s power, position or prosperity does not promise peace and security in the long run. To be safe, one needn’t get someone married. One should work hard to achieve one’s goal. The married woman, who doesn’t stand on her own feet has to depend upon her husband for everything.

I. Observe the data given in the bar diagrams related to male and female infant mortality rates (IMR) in India over the years 1990 to 2008 and answer the questions given.

Question 4.
What, according to you, may the reasons be for the female IMR being higher than the male IMR?.
Answer:
I think the reason may be that the parents think that girl children are burdensome. They think it is very difficult to educate them and get them married to the males. They have to give dowry to the males. So, most of the parents don’t want female children. Hence, the female IMR is higher than the male IMR.

II. Group Work :
Discuss the above questions in your group and write an analytical report on the Infant Mortality Rates in India.
Answer:
When we observe the bar diagram, there has been a gradual decrease in both the female IMR and the male IMR. There is a sudden fall in the male IMR in 2003. The difference in infant mortality rates between male and female is the highest in 2003. The decrease in the IMR shows us the changed views of the parents with the times. If there is a wide gap in IMR between male and female, one of genders will be left unmarried and there is an imbalance in the family system. The parents think that females are burdensome. They feel it difficult to educate and get them married. They are not in a position to give dowry to the males. So, most of the parents don’t want female children. Hence, the female IMR is higher than the male IMR. The main reason for the decrease in IMR over the years is that the parents have changed their attitude with the times. The advanced medical facilities and the increase in the literacy rate among the girl children are also reasons for it. I think there will be a further decrease in the IMR after 5 years.

Work in pairs and debate on the following proposition.
“Reservation in education, employment and legislature will empower the women.”
Answer:
Argument for the statement:
There is no doubt, surely reservation in education, employment and legislature will empower the women. As all of us know, today most of the women’s lives are confined to the kitchen. They have to depend upon their husbands for everything. They can’t protect themselves. If they have reservation, most of the women get good education and employment. Then they don’t have to beg anyone for anything. They will be able to lead a dignified life. If there is reservation in legislature, there will be more women participation in politics and society. It is expected to create equal opportunities for women along with men with reservation for women. Our society is a male dominated one. Reservation in education, employment and legislature would amount to a positive discrimination. Reservation for women not only empowers them but also helps the society.
Argument against the statement:
Can reservations for women be an effective measure and do the women really require such special treatment and will they be really empowered with reservations ? The intelligent male persons will lose the opportunities if the women are given reservations. Instead of providing any solution to this problem, giving reservations to women may give rise to social, political and psychological tensions. Besides, it is debatable if more women will attend schools, colleges or offices merely because of reservations. Reservation for women can be a temporary sort of relief and it won’t empower them. There should be a broader political, social and economic policy for the upliftment and empowerment of women.

B. Work on the following items.
Note down whether the woman you have interviewed is educated or uneducated; working/not working; married/unmarried. 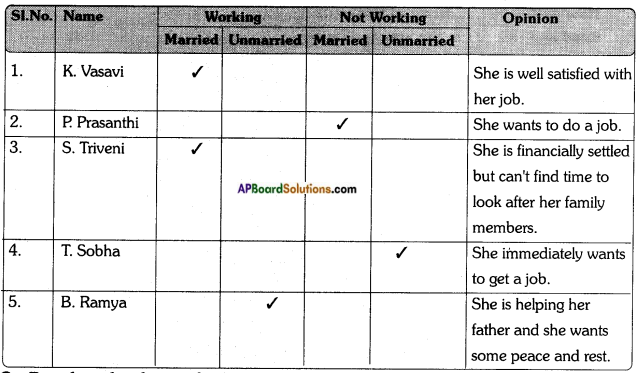 C. Based on the above information write a paragraph on ‘Woman Empowerment’.
Answer:
I have interviewed five women. Of them three women are married the rest of the two are unmarried. Three women are employed and the rest of the two are unemployed. All the five women opined that the women should be empowered. The employed women opined that they couldn’t find time to serve their families. The unemployed women want to stand on their feet. They want financial independence. They want jobs to get the stability and share the responsibilities and duties along with men. A woman is dynamic in
many roles she plays. She has to face many challenges and find out practical solutions. She is facing the challenges of economic inequality, gender-based violence, limited leadership and political participation and other issues. So, the women should be provided with more opportunities which could empower them to improve their lives, their rights and their future.

There is a family in London whose surname is grammar. There is a couple, Mr. Noun and Mrs. Verb. The couple has three children-one son pronoun and two daughters adverb and adjective. The son (pronoun) has to do all the work of his father in his absence. The two daughters love each other but there is a difference in them. Adjective loves her father and brother and keeps praising them. Adverb loves her mother more she always modifies her when there is a need. There are two servants in the family, preposition and conjunction. The preposition is the chief servant. He is the official servant of his master. He is the family servant and looks after every member of the family. The interjection joins the family in times of joy and sorrow.

I Can Take Care of Myself Summary in English